Kitchen comeback: The Wellness Kitchen in Templeton is back up and running

Check out the Wellness Kitchen's new-old digs in Templeton at 1255 Las Tablas Road in Templeton. Visit thewkrc.org to learn more.

Cinnamon was all I could think about after I walked through the door of the Wellness Kitchen and Resource Center in Templeton on March 8. It tickled my nostrils. The comfort of cooking spices wafting through a kitchen pushed tasty memories to the forefront of my brain.

I ticked through all the familiar foods it could be. I was hoping for cinnamon rolls. I sat in the waiting area next to cookbooks and pamphlets, all touting fresh, whole foods to make your body and mind feel as healthy as possible. Bone broth and full meals were waiting in the sliding glass cooler for Wellness Kitchen members to pick up. 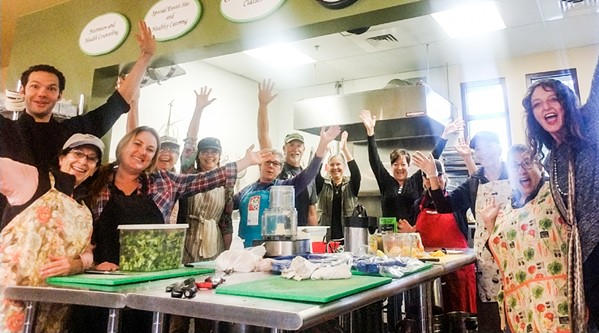 Executive Director Gina Marie Grieb was on the phone at her desk, between stacked up boxes of files that were waiting to be unpacked. Fresh drywall, paint, and the chrome of a recently refinished commercial kitchen gleamed with newness. Founder and therapeutic chef Nancy Walker was stacking waffles in the kitchen.

The nonprofit moved back into this space during the first week of March and has been cooking meals and passing out bone broth and healing tea from its home base since then. During the week of March 11 to 15, the Wellness Kitchen hosted a series of events for its grand-reopening after a fire on Oct. 21, 2018, destroyed the kitchen, momentarily halting all of the work that the Wellness Kitchen does.

"It was super emotional," Walker said. "Coming back here, it looked like a bomb had gone off."

Grieb had been the executive director for less than six months when the fire happened. As clients started calling, wondering if they would still have access to the low-cost, healthy meals—often tailored to restricted diets and for those with cancer or chronic diseases—that the Wellness Kitchen is known for, Grieb said she knew they needed to find another kitchen that could act as a stopgap until this building could get gutted, cleaned of smoke damage, and rebuilt.

"This was crisis 101 for me," Grieb said. "I could have left, but I didn't because this entity is amazing. ... We're just like a family. We just came together."

By family, she doesn't just mean the paid staffers or 55 volunteers who help run the kitchen and deliver meals. The Wellness Kitchen has a lot of support from the community.

Atascadero Bible Church offered up its kitchen for use temporarily. Idler's Home in Paso Robles donated its space so the nonprofit could still teach its nutrition education and cooking classes. Fig at Courtney's House was where the Wellness Kitchen distributed its meals from, and J. Dusi gave the nonprofit some warehouse space for the administrative side of things. 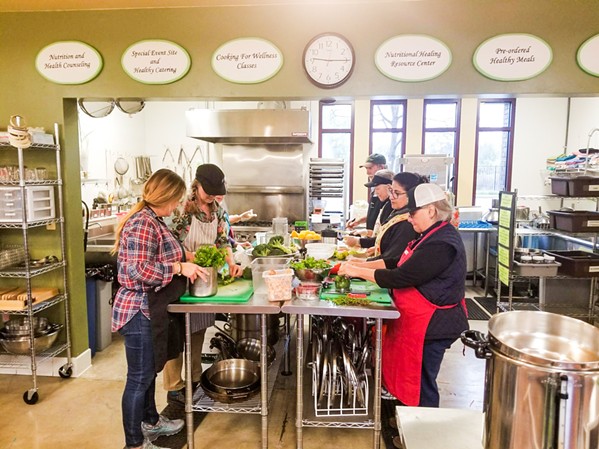 After the fire, Grieb said, she had to lay off four employees, but three of them want to come back and offer their services as volunteers. It's an example of how much the community believes in the work that this nonprofit does.

Grieb sent me a text message follow-up on March 9, listing all of the businesses that donated materials and labor to get the kitchen back up and running. Totally Tile did the tile, Stuart Flooring refinished the concrete floor, Central Coast Mechanical donated refrigeration services and an icemaker, Pier 46 donated a prep sink.

"I don't know how we managed to do it, looking back on it now. ... It was definitely community-driven, as far as support," Grieb said. "The whole community called me and just said, 'What can I do?'"

As piecemeal and spread out as everything was, Grieb looks at things with a glass-half-full type of attitude.

And the Wellness Kitchen does have big plans for the future. It's going to roll out a diabetes program that includes an educational component, and it plans to start healthy cooking classes for children and teenagers. Grieb said the Wellness Kitchen would also like to expand its meal delivery program. Currently schlepping meals from San Simeon to San Luis Obispo, eventually the kitchen wants to expand that service along the coast and into South County.

In addition to all of that, the kitchen is increasing its catering services as well. With food that's gluten-free and dairy-free with unrefined sugars, the Wellness Kitchen offers up a healthier option for a wine pick-up party or other events. That's where the cinnamon comes in. 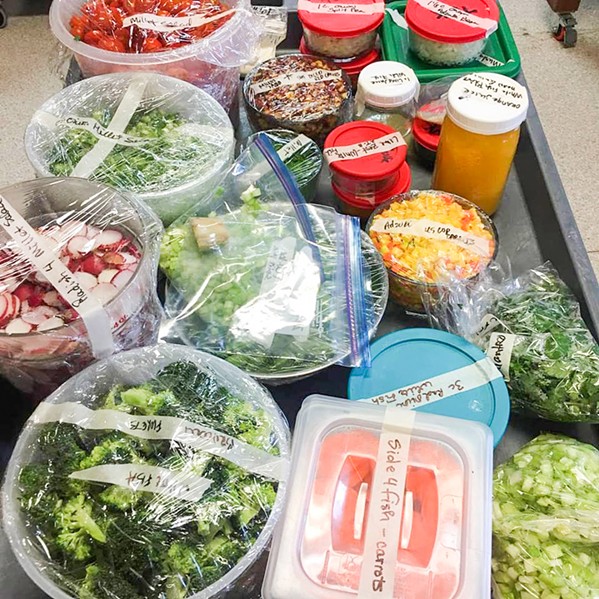 The smell engulfing my senses were waffles made with teff flour, which is ground from the ancient Ethiopian grain, teff. Walker broke off one of those delectable overhanging edges for me to taste. It's soft and warm, with a clean flavor.

These thin waffles will become part of the Wellness Kitchen's version of chicken and waffles, only instead of deep-frying the chicken, it's getting baked with apples and onions. That will then be tucked into a folded waffle as a grab-n-go item for an event the kitchen is catering at a winery.

A lot needs to happen in this space over the weekend. All of the files needed to be unpacked and put away, and the Wellness Kitchen had to prepare for its first festivity of the week.

On March 10, the Wellness Kitchen hosted a big celebration for all of its volunteers.

"We do a volunteers' event every year, but this year's a little more special," Grieb said. "They were pretty much waiting for us to come back." Δ

Editor Camillia Lanham is all about comebacks. She can be reached at clanham@newtimesslo.com.