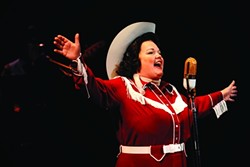 Country music hasn’t aged well. I’m no expert, but I suspect that somewhere in the genre’s transition from folk art to commercial industry, something indefinable, something you might call soul, was lost. Whatever it was, Patsy Cline had it.

Directed by Melissa Rain Anderson, PCPA’s Always … Patsy Cline tells the true story of the meeting of Patsy Cline and one of her devoted fans, Texas housewife Louise Seger, at the Esquire Ballroom, just outside of Houston. Played with fire-in-her-eyes zeal by Suzy Newman, Louise narrates the story, telling us with her crackly voice and convincing Southern drawl of how she first heard Miss Patsy Cline on the Arthur Godfrey Show and later on the radio, and began calling in daily, begging, or rather commanding, the DJ to play songs like “Walkin’ After Midnight” and “I Fall to Pieces.”

Kitty Balay reprises her 1997 and 1998 roles as Patsy, and seems to know the character inside and out. Her deep, rich voice is also a terrific match for Cline’s songs, 27 of which are included in this production. Always opens with Cline’s performance of numbers like “Honky Tonk Merry Go Round” and “Back in Baby’s Arms” at the Grand Ole Opry (backed by a live band under the musical direction of Jonathan Swoboda).

Transition to Newman, big-haired, ecstatic, mumble-singing along and bopping to the music all the way to her kitchen table, like nobody’s watching. If her work at the San Luis Obispo Little Theatre is any indication, Newman has a knack for playing sweet, likable characters who are nonetheless so volatile or intense that they start to scare you. As Louise, this translates into a portrayal of a fiercely loyal fan: a little overeager, perhaps, but endearing as well.

Nowhere is this quality better personified than when Patsy asks Louise to stand next to the drummer to make sure he doesn’t rush her. Charged with this responsibility, Newman dashes over to the band and begins marking time in earnest. Brows contorted in concentration, she hunkers low, her eyes trained on Patsy like a guard dog, her right arm slicing through the air with precision. No one rushes Miss Patsy Cline.

The meeting of Patsy and Louise comes about when Louise, her boyfriend, and her boss arrive at the Esquire Ballroom a full hour and a half early—at Louise’s insistence, of course. With time to kill, the three order drinks at the bar, when, what do you know? In walks a well-dressed woman in a gray raincoat and heels, taking a walk around the place, eyeing it up and down like she’s trying to take it all in. Humorously, Louise fails to recognize her idol at first, but soon the realization hits her, and she approaches the singer, barely concealing her excitement. Rather than appearing put off by her frothing zeal, Patsy graciously accepts Louise’s offer to join her at her table, and soon they’re both singing “Come On In (And Sit Right Down),” tossing back some beers, and having a grand time.

Always was created and originally directed in 1980 by Houston native Ted Swindley, who had intended the show merely as a fun summer production with local appeal. Swindley based his production on letters exchanged between Cline and Seger (in an effort to distinguish life from art, I’m referring to the actual people as Cline and Seger, and their fictional counterparts as Patsy and Louise). The show itself, in fact, is named for the way Cline would sign each letter.

But what Swindley didn’t predict was how popular the show would become, not just with the Houston audiences for which it was conceived, but with Cline fans all over the country. The relationship between the singer and the housewife resonated powerfully, perhaps reaffirming the down-home spirit of country music in spite of its increasing commercialization. By the ’80s, the genre had gone pop, forgetting its roots, but here was Miss Patsy Cline, reminding audiences that country music was about everyday people. (“Patsy was as much ‘us’ as we were!” exclaims Louise, describing that first encounter.)

Louise invites Patsy to stay at her place, and the women find themselves pouring their hearts out, lamenting wayward men at the kitchen table over bacon, eggs, and a pot of strong coffee. It’s just about the countriest thing you’ve ever seen.

Balay is hilarious in this kitchen scene, belting “Three Cigarettes in an Ashtray,” “Crazy,” and “Seven Lonely Days” as Newman’s Louise shouts out amens.

It was in the same scene, though, that I also found myself wishing for more of a “moment” between the two characters. I’d happily have traded the following scene—in which Patsy goes off to bed and sings “If I Could See the World (Through the Eyes of a Child)” to a teddy bear, and Louise reckons that Patsy must be missing her child at home—for a bit more unguarded, cathartic honesty at that kitchen table. In my view, the story hinges on that kitchen scene and the connections forged there. I found myself wishing Swindley had given it a bit more depth.

Louise takes Patsy to the airport, stopping briefly at the country music station to knock the socks off the radio DJ. Then she’s gone.

News of Patsy’s death in a plane crash several years later is no surprise to the audience, but it hits Louise hard, and the shock she feels seems to reverberate through the small theater.

Balay reappears as a kind of apparition, or a memory, and when she sings “True Love” one becomes aware, perhaps for the first time, of the song’s lonesome, funereal sound. Country may have since become a little ridiculous, exulting in its own trashiness, but in Balay’s performance of Cline, we’re reminded that it can also be mysterious, beautiful, and sad.

This article was updated on Tuesday, August 22 to correct a spelling error.