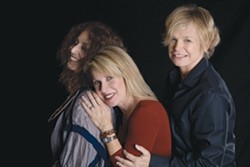 Everybody in SLO County knows extraordinary singer-songwriter Jill Knight, which is why songwriter and concert promoter Steve Key decided to tap her to host a new six-date concert series featuring top-notch touring singer-songwriters.

Called “Knight Flight,” the new series is inspired by Santa Barbara’s “Sings Like Hell” and Santa Ynez’ “Tales from the Tavern.”

“The goal,” said Key in a press release, “is to provide a concert stage for folk festival headliners, including some artists who are rarely seen in local venues.”

On Saturday, June 27, Jill Knight will host The Refugees, a trio comprised of accomplished solo artists Cindy Bullens, Deborah Holland, and Wendy Waldman, who together have been wowing audiences with soaring harmonies, sparkling musicianship, and a charming and humorous stage presence. No wonder they’ve been called a female Crosby, Still & Nash … with humor.

Shooter Jennings looks like the quintessential bad boy rocker. He’s crazy skinny, tatted up, long-haired, and he stood in for Axl Rose a couple of times when the Guns N’ Roses frontman couldn’t make the gig. But under that rock exterior, there’s a country boy dying to get out.

“Underneath that gun are the letters CBCS, for ‘country boy can survive,’” says his bio. “That earring turns out to be an eagle silhouette spread-winged into the letter ‘W’—an icon known by anyone who has listened to and loved the original outlaw, [his dad] Waylon Jennings. That same icon is etched onto Shooter’s stomach, but the one in his ear is even more special.”

Shooter Jennings has three studio albums under his belt, including the awesomely titled Put the O Back in C untry, so he’ll have plenty of original materials to draw from when he plays Pozo Saloon this weekend, but he’ll probably play a few choice covers as well, including one by Hank Williams Jr. that seems to also sum up the younger Jennings’ huge shadow: “I don’t wanna be a legend/ I just wanna be a man,” he sings on “Living Proof.”

Criticnue will open the 6 p.m. show on Friday, June 26. Tickets are on sale at Boo Boo Records, Cheap Thrills, Aardvark Music, the Clark Center, online at pozosaloon.com or by phone (888) 512-SHOW.

OK, you’ve got Jake La Botz the Chicago-schooled bluesman, who under the expert tutelage of Robert Johnson contemporary David “Honeyboy” Edwards learned his chops and earned his stripes. Then you’ve got Jake La Botz the Hollywood actor, favorite of indie auteur Steve Buscemi, in whose films Animal Factory (with Willem Defoe and Tom Arnold) and Lonesome Jim (with Liv Tyler and Casey Affleck) he’s appeared. Most recently he starred in the newest Rambo opposite Sylvester Stallone.

On Saturday, June 27, you’ll be getting a dose of Jake La Botz the bluesman when he plays the Tent City Stage in the Historic Colony District of Atascadero.

“It feels like a strange energy creeps into my body and demands attention,” said La Botz by way of explaining where his songs come from. “I start to follow a thread and I keep pulling it and following it; moving it around and playing with it, and trying to understand it in terms of my own experience.”

Tickets for the Jake La Botz show cost $10 in advance, $15 at the door (12 and under free), and can be purchased online or in person at Wilkins Printing in Atascadero, Aardvark Music in Paso Robles, and Boo Boo Records in SLO. Gates will open at 7:30 p.m. and music starts at 8 p.m.

All proceeds will benefit the Charles Paddock Zoo.

Downtown Brew has four shows cooked up for you this week starting with reggae act The Abyssinians with Etana opening (7:30 p.m.; all ages; $15 presale or $20 at the door) on Friday, June 26. This roots harmony vocal trio formed in 1968 in Jamaica with founding members Donald Manning, Bernard Collins, and Linford Manning. Their first hit, 1969’s “Satta Massagana,” was a Rastafarian hymn speaking of Ethiopia, and it became a worldwide anthem that launched The Abyssinians into International stardom. “Declaration of Rights,” “Yi Mas Gan,” and “Let My Days Be Long” were a string of hits that followed.

On Saturday, June 27, a favorite formerly local indie folk act returns to town (8 p.m.; all ages; $10). Half of Port O’Brien (Cambria Goodwin) may have got her start in Cambria, but she and the former duo (Van Pierszalowski who’s expanded the act to a quartet) have definitely extended their artistic reach far beyond that North Coast burg. Constant touring and recording have made Port O’Brien indie rock darlings. San Francisco’s The Papercuts will open the show.

Acoustic indie folk rocker Chuck Ragan will be joined by The Wheel on Sunday, June 28 (8 p.m.; all ages; $10) for an evening of incredible sensitive songs, which is quite a reversal from Chuck’s days fronting screaming punk-rock act Hot Water Music. “I think this is the most mature material that I’ve ever been able to do,” said Ragan. “I’ve gotten a little older and while I had a blast with all the yelling and the sweating and falling off the stage, this is who I am right now.”

Do it al fresco

The JD Project plays the next Concerts in the Park series on Friday, June 26, from 5:30 to 7:30 p.m. at the City Park in downtown Paso Robles. Expect a driving blend of rock, blues, soul, and country that will move you to dance and sing along.

The crowds have been fat down at the Concerts in the Plaza, and since reggae favorites Resination play on Friday, June 26 from 5:30 to 7:30 p.m. in the Mission Plaza, expect more fun, more sun, more beer, and more dancing.

Just finished dancing to Resination and not ready to go home yet? Head over to Terraza Grill (formerly Cisco’s … or The Spindle if you go back that far) and grab a bite and check out Matthias Clark, who’ll play beginning at 7:30 p.m. on Friday, June 26. “I’ll be there with my band The Cry: Greg Garman on drums and Jack Petersen on bass. See you there!”

Masters of ’50s and ’60s classic rock, Unfinished Business, will bring the hits to the great outdoors on Sunday, June 28 as the next installment of the Grover Beach Parks and Recreation Department and the Grover Beach Farmers’ Market Association’s 2009 Sizzlin’ Summer Concert Series, held every Sunday from 3 to 6 p.m. at the Ramona Garden Park.

Prog rocker Grenade for Pacifist will be joined by Portland’s Fist Fite and local opener Swan Thief on Thursday, June 25 at the Z-Club.

City Nights Jazz presents LA-based vocalist Yevette Stewart playing with the Mike Raynor Group at the Inn at Morro Bay this Friday, June 26 from 7 to 10 p.m. Stewart is the progeny of a bassist father and dancer mother, and she grew up in San Francisco around musicians, dancers, singers, and other performers. By age five, she could emulate Ella Fitzgerald, and by 13 she was singing in jazz groups.

Vina Robles’ foray into concerts is off to a strong start after last month’s show, and at 8 p.m. Friday, June 26, the series continues with country/blues rocker Sean Wiggins and lOne gOat. This time around the winery is moving the concert onto their grass amphitheater, which can hold up to 350 people, but that doesn’t mean you shouldn’t call for reservations at 360-0140. It’s $20 for the general public, or free for Vina Robles club members.

New Times’ own CD reviewer DJ Malik Miko will get the party started at 8:30 p.m. in the Z-Club on Friday, June 26 when he spins some records before Sparrows Gate opens for Quiet Life.

The Hoot Road Show Summer Concerts on the Lawn and Under the Ancient Oaks at Stacked Stone Cellars is a real mouthful of a title, but the concept is simple: good music, good food and wine, and good company. On Sunday, June 28 at 3 p.m., witness the remarkable Dorian Michael and Kenny Blackwell Quartet for only $10 (call 546-2857 for tickets).

On Sunday, June 28, guitarist Ron Anthony (formerly of the George Shearing Quintet and a ten-year stint as Frank Sinatra’s accompanist) is the next attraction at the Famous Jazz Artist Series at the Hamlet in Cambria. Bassist Darek Oles and drummer Darrell Voss as well as concert series co-producers Charlie and Sandi Shoemake (piano/vibraphone and vocals) will join him at 4 p.m. ($15) and 7:15 ($12). See both shows for $20. Call 927-0567 for reservations.

Chapel Hill, North Carolina’s Black Skies are back on tour with a stop on Sunday, June 28 at the Z-Club. Pitchfork said of the band, “Think Black Sabbath, the Melvins, chest-buckling rhythms and colossally writhing guitars, sweat and leather and broken glass.” Sounds painful!

Indie rock act Keaton Collective will play the Frog and Peach on Monday, June 29, bringing their straight-outta-Washington harmony vocals to the downtown club.

Glen Starkey aches for you … no, wait. It’s just gas. Talk to him about his diet at gstarkey@newtimesslo.com.

Various Artists—Open Strings: 1920s Middle Eastern Recording / New Responses
Music seems to be cheapened for pure commodity purposes sometimes. However, the UK’s Honest Jon’s Records is trying to put the magic back into the recorded sound. Here, on Open Strings, they tap into the EMI archives in Hayes, England, curating a disc of sizzling Arabic instrumental performances from the 1920s. Culled from the original 78s, the musicianship is beyond phenomenal, weaving dense, ominous passages of improvisation with string instruments (the oud, the santour and the spike fiddle) of Arabic, Turkish, and Persian lineage. But aside from historical preservation of a musically heritage, the second disc brings this connection to the modern world. Ten modern guitarist marvels—like Sir Richard Bishop, Six Organ Of Admittance, and Stephen Basho-Jughans—delight in the Middle Eastern modal scale that has long been mined from folk guitarists like John Fahey to the Dead’s Jerry Garcia. Whether they’re plucking out intricate guitar raptures or a psychedelic sitar drone, it’s a welcomed accompaniment and interesting conversation on the Middle East’s contribution to modern revivalism.

Sleepy Sun—Embrace
Absorbing the cosmic wilderness of their native Santa Cruz and rolling it up with the mystic vitality of their new San Francisco locale, Sleepy Sun seem to have parted the waters between the two branches of psychedelic jam out. Pastorally acoustic, “Lord” floats along with earthy, harmony-rich melodies and a fuzzed-out guitar solo keeping the tag of Americana from sticking. “Golden Artifact” saunters with the same hypnotic blues the Doors made for Morrison’s poetic trips. But a track later, on their epic “White Dove,” the long hair is pulled free from the ponytails and whipped to a frenzy of acid-rock, Sabbath-heavy riffs that burn red-hot after a raucous gorilla-bashing drum solo, then gets turned down to a gentle skip. It’s this dichotomy between freewheeling meltdown and amiable psych-folk that grabs your attention, and the flawless execution is what will have you playing it over and over.