Glen Knives Out starts with a classic Agatha Christie whodunit setup: Wealthy crime novelist Harlan Thrombey invites his extended—and deeply dysfunctional—family to his remote estate to celebrate his 85th birthday, but he's discovered dead the next morning by his housekeeper, Fran (Edi Patterson). Da-dun-dun! Police Lt. Elliott (LaKeith Stanfield) is summoned to investigate, along with dapper and astute detective Benoit Blanc, who begins to question the various family members and staff, all of whom have deep dark secrets and hidden motives. Viewers quickly become armchair detectives as we work alongside Blanc to discover the culprit in our midst! Who could it be? Son Walt Thrombey (Michael Shannon), who runs his father's lucrative publishing empire, or Walt's Nazi son Jacob Thrombey (Jaeden Martell), or wife Donna Thrombey (Riki Lindhome)? Or Harlan's daughter, Linda Drysdale (Jamie Lee Curtis), who parlayed her father's million-dollar loan into a house-of-cards real estate empire? Or maybe it's Linda's husband, Richard Drysdale (Don Johnson), who's under his wife's thumb? Or their lazy son, Ransom Drysdale (Chris Evans), who's at risk of being cut off from his grandfather's good graces? Or Harlan's daughter-in-law, Joni Thrombey, (Toni Collette), the widow of his deceased son, or her daughter, Meg Thrombey (Katherine Langford), whose tuition to an elite university is at risk? At the center of it all is Marta Cabrera (Ana de Armas), Harlan's nurse and friend. Despite the large ensemble cast, keeping track of who's who is never a problem in Rian Johnson's slick screenplay. He's a terrific director, and his 2005 high school film noir crime drama, Brick, remains a favorite, as does his 2012 sci-fi thriller, Looper. Knives Out is an excellent addition to Johnson's impressive oeuvre. We think we know what's going on, but as the story plays out, we discover layer upon layer of intrigue.

Anna There certainly are a lot of moving parts and characters (aka suspects) to keep track of, but they're all so uniquely devious that it's easy to follow. Just when you think the true story has reared its ugly head, another twist in the wicked tale emerges. Marta is seemingly the only one who doesn't have anything to gain from Harlan's demise, though the family promises to take care of her financially because of her loving care for the deceased—that is until the will reading doesn't go as planned and suddenly the family is turning on each other, doing whatever they have to do to get Harlan's fortune. The molasses-mouthed sleuth Blanc names Marta his "Watson" early on, and she has an easy tell when it comes to deceit—she vomits if she lies—and she knows the ins and outs of both the family and the household. He's also on the hunt to figure out who exactly hired him—a wad of cash showed up at his door to convince him to look into the case that local cops are sure is suicide. This cast is amazing—talk about some serious star power! I'd love to pick out one or two to name as standouts, but I can't choose. All of the Thrombeys are deliciously wicked in their own way, and everyone on the periphery of them deserves a medal for dealing with their crazy. This movie was so much fun; I love a good mystery! 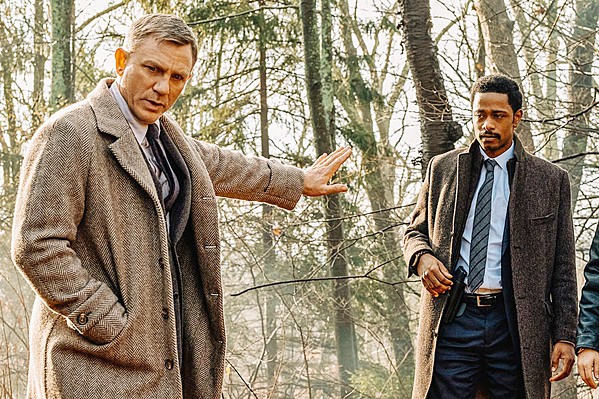 Glen There's a bit of commentary on contemporary politics, some centered on Marta, who the Thrombeys know comes from somewhere south of the U.S. but where: Paraguay? Ecuador? Nicaragua? Honduras? They like to pretend they're high-minded, but it's clear they think of Marta as "the help." When things grow more complicated, Marta's undocumented mother becomes a pawn in the family's game to secure Harlan's fortune. It's also comical that they all consider themselves "self-made," though without Harlan's largesse, they'd have nothing. Each actor delivers deft and engaging performances, but Craig and de Armas really stand out. Craig's Southern drawl transcends affectation, and de Armas, a Cuban, is supremely likable as the sweet-natured Marta. The interaction between them is devilishly fun, especially when they trade barbs. They both have well-set moral compasses, which put them at odds with those around them. Evans is clearly having a lot of fun as the irreverent scion of the family, driving around in his classic BMW and living in his stylish modernist house. Unlike the rest of his family, he's not interested in putting on airs of morality. He likes money and doesn't want to work for it. Speaking of houses, Harlan's gothic mansion is a character in its own right, with its hidden entrances and odd furnishing—macabre sculptures, dark corners, and of course the signature throne backed by a semi-circle of knives. The film skirts abject campiness but keeps the proceedings just serious enough to stop from falling into farce. It's a heck of a lot of fun and proof that murder mysteries need not fall out of favor as outdated. Knives Out pays homage to its forebears while creating a fresh and contemporary take on an old genre.

Anna That house is basically built for a murder mystery—faces peering out from every painting and banister, false windows, and creaky staircases. I have to point out an obscure observation but one I know my fellow knitters will pick up on: The sweaters in this movie are amazing and totally matched to the characters who wear them. The attention to that sort of detail is what makes Knives Out a fun romp that's totally re-watchable, even if the whodunit mystery is no longer there on a second viewing. There's a lot to chew on, and it's all yummy. The setting is rich and gothic, the characters flawed but in a very human way, and the pace is lively and intense. The only two people you know you should side with are Blanc and Marta; with everyone else, the claws come out in an ugly way. Ransom seems like he's on Marta's side, but he also has the air of an entitled sleaze who may just be out for himself. These characters are a lot of fun, and the mysterious web they get caught up in is an adventure mixed with mystery. Go see this one with the family this holiday season. It'll give you a great conversation piece for your next meal. Δ