On her sophomore solo release, Can’t Bring Me Down, Kristen Black proves she’s a musical chameleon, playing everything from hooky pop on lead track “The One” to Tedeschi Trucks Band-style funk-blues on “Fortunate One.”

“On With the Show” is a beautiful narrative ballad about Black’s twin boys as they come of age: “Eighteen years goes by so fast, people always say. Those words never rung so true until today. So go off and explore this world while you’ve go this chance. Just try and stay true to your heart and you’ll enjoy life’s dance. And know that you’ll carry my love everywhere you’ll go.”

“Love” finds Black getting funky again, but when she moves to track five, the album’s title track, she drives straight into a punk song. “You’re so Hip” moves back into some horn-driven blues.

“I just want to kiss you when I see you riding on your bike,” Black sings on “The Bicycle Song,” a charming country-pop ditty she wrote about her husband. “Your smile’s so big, you’re feeling light on your bike, on your bike. And I just want to hold you instead of flying through those passing lanes. Our speed should always be the same on our bikes, on our bikes.”

“Since We’re Here (For Dru)” is a tribute to her friend Dru Lynch, who succumbed to an illness last year. The rock song is deeply personal and highly emotional.

The album finishes with “Another Drink,” a sweetly somber ballad. Musically, the album is all over the place, but it fits together perfectly.

“It comes from all the different styles of music that I like, from punk to blues to rock to funk, and some country,” Black said during a recent interview.

While musically diverse, thematically the songs are tied together by one of life’s most universal ideas.

“Love is the theme throughout this record,” Black said. “As I’ve gotten older, I’ve realized that life is pretty special and we need to appreciate every moment of every day. Take all the love you’re given and give all the love you can.”

The album made use of two of our finest local recording studios. Black started at Kip Stork’s Avalon Recording Studio in SLO but later finished at Steve Crimmel’s Painted Sky Studios in Cambria.

“Kip went on the road with the Aristocrats so I finished at Steve’s place. Both were appropriate for the songs I recorded there, and both were wonderful to work with in their own ways.”

“I was very fortunate. A couple of friends of mine, Rob and Lisa McCann, know Jeffrey Perkins, Paul Thorn’s drummer, and they put me in touch with him. I just asked him. I thought, ‘Why not?’ I was shocked when he agreed to come out from Nashville and play.”

That led to Bob Britt joining in as well as Bob’s wife, Etta, singing background vocals on some tracks.

“Bob’s played with everyone from Bob Dylan to Delbert McClinton to the Dixie Chicks,” Black added. “He’s not a slacker!”

She met Kenny Lee Lewis because their children attended junior high together. She says it was a “shot in the dark,” but she asked and he agreed.

“I got really lucky,” she said, adding that the local players were equally instrumental in making the album what it is.

“I had a vision for every song and I tried to find the right players for that vision,” Black said.

This Saturday, Aug. 20, Kristen Black will play an album release party at Tap It Brewing Company (6:30 p.m.; 21-and-older; $10 presale available at tapitbrewing.com or kristenblackmusic.com or $15 at the door).

She’ll be playing songs from her new album as well as old favorites like “Weirdo Magnet.” In fact, she’ll also be selling T-shirts that say either “weirdo” or “weirdo magnet.”

“That way you can decide if you’re a weirdo or a weirdo magnet,” she quipped.

“I want to see people’s smiling faces and spread the love,” Black said.

David Lynch and Friends will open the show.

Good Medicine Presents teams with Numbskull to present AJJ at SLO Grange Hall on Wednesday, Aug. 24 (6 p.m.; all ages; $15 presale at ticketfly.com or $17 at the door). Together 12 years now, the Arizona punk act AJJ was formerly called Andrew Jackson Jihad, but in an interview with the AV Club, frontman Sean Bonnette explained they switched the name because they’re not Muslim and felt using jihad in the name was disrespectful, and they no longer want to endorse President Andrew Jackson, who Bonnette called an “odious” person.

The good news is their music is still awesome and their online videos funny and clever. They’re touring in support of their sixth album, The Bible 2, full of “scuzzy punk screeds” according to their bio. John Congelton & The Nighty Nite and Roar opens.

Hurt me? Got the beat! Feel like I do? 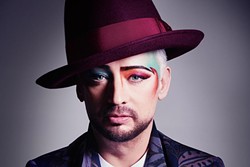 Vina Robles Amphitheatre has three big shows lined up this week starting with Boy George and Culture Club on Saturday, Aug. 20, with Groves opening (8p.m.; all ages; $55 to $95 at vinaroblesamphitheatre.com). After a very successful U.S. mini-tour last year, the ’80s super group decided to mount their first world tour in more than 12 years, which will take them to 40 cities in the U.S., Canada, Mexico, Australia, and Asia. Expect to hear hits like “Karma Chameleon,” “Do You Really Want To Hurt Me,” and “Miss Me Blind.” With a phat horn section and a cadre of female background singers, this show is pulling out all the stops!

The Go-Gos play the amphitheater on Tuesday, Aug. 22, with Best Coast and Kaya Stewart opening. (7:30 p.m.; all ages; $45 to $65 at vinaroblesamphitheatre.com). The multi-platinum rock group says this is their farewell tour “to commemorate a groundbreaking 38 years in the music industry.” Original members Charlotte Caffey, Belinda Carlisle, Gina Schock, and Jane Wiedlin will perform songs from their timeless catalog. “After a 38-year run, we’re gearing up for one last blast of a summer tour,” the band said in a press statement. “Our Lips are Sealed,” “Cool Jerk,” “We Got the Beat,” and “Vacation”—you’ll hear them all live!

Peter Frampton plays Vina Robles next Thursday, Aug. 25 (7:30 p.m.; all ages; $59 to $79 at vinaroblesamphitheatre.com). Frampton rocketed to international fame upon the release of his live 1976 album Frampton Comes Alive!, which featured his amazing talking guitar sound. The Grammy Award-winner’s latest album, Acoustic Classics, has been a critical hit, delivering stripped-down versions of his classic hits including “Baby, I Love Your Way,” “Lines On My Face,” “Do You Feel Like I Do,” “Show Me The Way,” and more. 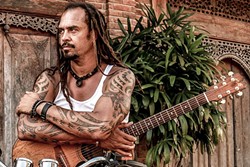 I’ve been a big fan of Michael Franti since his Disposable Heroes of Hiphoprisy days. Of late, he’s grown from an angry rapper to love-spreading activist. I like his politics, his socially conscious message, and his Bob Marley-esque persona and wisdom.

Next Thursday, Aug. 25, Michael Franti & Spearhead play Avila Beach Resort (5 p.m. doors; all ages; $35 and $80 available at ticketfly.com or Boo Boo Records) on their Soulrocker Tour, named after Franti’s ninth studio album that debuted at No. 1 on the iTunes Alternative album chart and No. 5 on the Billboard Rock Albums chart. Its biggest hits so far are the upbeat, socially positive tracks “Crazy For You” and “Good to be Alive Today.” Also expect past hits like 2009’s “Say Hey (I Love You).”

“Right now is a very challenging time for people, for our nation, and the planet,” Franti, a past recipient of the Global Exchange’s Domestic Human Rights Award, said in press materials. “But I really believe that music can help fight war and violence and hatred. The world needs that more than ever now, so my intention with this album was to make music that could bring people together.”

Zella Day opens the show, which will end at 10 p.m.

Led by dark, growly guitarist/vocalist May Black, MUTT of Oakland will grind its way into the Central Coast for two haunting gigs with SLO garage rockers Hayley and the Crushers for two gigs. On Friday, Aug. 19, catch the bands at SloDoCo for a free, all-ages sugar rush featuring opening act Mothra, a dreamy cluster of genre-bending eccentrics. On Saturday, Aug. 20, MUTT and the Crushers have their sights set on Santa Maria’s O’Sullivan’s pub, where they’ll play for the “adults” with local low-fi rock ’n’ rollers Off-Center and the Holes (21-and-older; $5 for MUTT’s gas tank as they continue on with their DIY tour).

Darrell Voss and the Real Time Jazz All-Stars will present a jazzy afternoon on Sunday, Aug. 21, in Los Osos’ St. Benedict’s Episcopal Church (3 p.m.; all ages; $25 at Boo Boo Records, Abundance Shop Thrift Store, or at the door). Expect a lively tribute to vibraphone masters such as Lionel Hampton, Milt Jackson, and Cal Tjader. Beer and wine is available for purchase, as well as complimentary snacks and non-alcoholic beverages.

SLO Brew hosts Holychild this Sunday, Aug. 21 (9 p.m.;18-and-older; $12 general admission or $25 for VIP balcony seating at ticketweb.com). The brat pop duo brings electronic beats and “tell it like it is” lyrics, according to press materials. It’s bubbly, glittery pop.

Got a note from former Red Skunk frontwoman Molly Reeves recently. “It’s been awhile since I’ve been home. New Orleans is absolutely incredible but it ain’t no Los Osos!” she joked. She’ll be back in town with The World’s Finest Apples, a New Orleans hot jazz quintet touring in support of their new album Songs for Girls From Billings, Montana, this Wednesday, Aug. 24 (7:30 p.m.; all ages; $15 at 547-0278 or at the door).