The very first time I heard “Wicked Way,” my favorite track on Ben Taylor’s new album The Legend of Kung Folk, I loved it. Not only is it bitingly funny, it’s also got a chorus so hooky I feel like a flounder being reeled in.

Taylor, the son of James Taylor and Carly Simon, has an enviable musical pedigree, and while his literate songwriting style and reedy tenor will remind listeners of his dad, he’s definitely got a sound all his own.

While he was driving through the gloomy Midwest on a nationwide tour, New Times managed to get a spotty phone interview between poor cell reception.

Naturally, the first question was about what it’s like hanging with the ’rents?

“You know, they’re good on their good days and difficult on their bad days, like every parent, like everyone, I guess. I don’t have the basis of comparison since I’ve never had any other parents.”

Okay, so I read you’re like a blackbelt in various martial arts.

“No, not a blackbelt. I used to study martial arts and have a pretty solid foundation.”

Have you ever had to use your street fighting skills to escape groupies?

“Actually, at the show last night there were a couple of pretty tough burlesque dancers.”

Did you fight them?

“I had to use insight to escape.”

Do you attract a lot of burlesque dancers?

“They just came to my show, so yeah, I get a certain number of burlesque dancers. I cater to all sorts.”

You can see Ben Taylor at Downtown Brew on Sunday, Feb. 22, during a 6:30 p.m., all-ages show ($14 presale or $15 at the door). And a child of another famous parent opens the show: Schuyler Fisk, daughter of Sissy Spacek. Like mom, Schuyler is an actor and appeared in films such as The Babysitters Club, Snow Day, Orange County, American Gun, and I’m Reed Fish, in which she sings, so I can attest that she’s awesome. Finally, our own Damon Castillo will play first. This should be a great show.

Sticking it to the Man

In shocking breaking news, a musician has refused to sell out! I know! Un. Freaking. Believable! But that’s singer-songwriter Joshua Radin’s story and he’s sticking to it.

A few years back, Radin released his debut album through Columbia Records.

“They promised me I’d be opening for [Bob] Dylan and have complete artistic freedom,” he recently told Billboard. “After I turned in my follow-up record, I got a call from them saying they liked it but didn’t hear a top 40 hit. They gave me two choices: go to the studio with Rick Rubin (Metallica, Red Hot Chili Peppers, Neil Diamond) to make a hit or buy myself out.”

Incredulously, Radin chose the latter and bought back his masters, then signed to the newly launched Mom and Pop Records. They released Simple Times in September and it went on to hit No. 1 on the iTunes chart. Take that, Columbia Records!

Joshua Radin plays Downtown Brew on Friday, Feb. 20, and as cool as it will be to see a guy who didn’t sell out, I think I’m more excited about the opening act, Meiko, who’s extra saucy and reminds me of early Liz Phair. 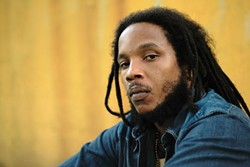 February is reggae month, mainly because it’s Bob Marley’s birthday and every reggae band and its mother has tribute shows. This week you can choose between Groundation and their 9th Annual Tribute to Bob Marley Tour, which hits Downtown Brew on Tuesday, Feb. 24, or you can see Bob’s progeny when Otter Productions presents “SLO Dayz 2009” featuring Stephen Marley (unplugged), Queen Ifrica, Tony Rebel, Rootz Underground, Tessanne Chin, and the Kicks on Saturday, Feb. 21 at the Graduate.

Stephen Marley, who’s as close to reggae royalty as they come, is touring in support of Mind Control. Stephen was a member of the celebrated Marley sibling group the Melody Makers since he was 7 and has grown into a Grammy-winning producer, singer-songwriter, and multi-instrumentalist. Stephen’s production, performance, and writing credits recently earned him another two Grammys, which gives him a total of five, more than any other Marley family member or reggae artist in history.

“My joy and my pain, this is me,” said Marley in a press release. “It’s a page from my book: Every page tells a story, but at the same time is a continuation of the page before it or the page to come. This is just one page. I don’t want to be just another artist. I want to make a statement. I want my music to uplift your mind and soul, to shed light and give hope.”

This is an 18-and-older, 7 p.m. show. Tickets are available at all Central Coast VALLITIX locations including Boo Boo’s, the Mustang Ticket Office, and the Mid-State Fair Box Office. Charge by phone at (888) 825-5484. Order on line at vallitix.com. 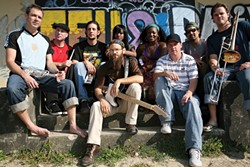 Groundation’s popularity keeps growing and growing, and show-goers at Downtown Brew’s Tuesday show will be blessed with two full sets of Marley’s music featuring legendary reggae drummer LeRoy “Horsemouth” Wallace, who played with Bob Marley, Peter Tosh, Burning Spear, and many other reggae artists in his 35-plus years in the business. Also Grammy-nominated guitarist Will Bernard will join the band on this tour. Will was nominated in 2008 for his Party Hats release.

Groundation takes Marley’s songs and infuses them with their blend of high-energy jazz-based improvisation, creating wholly unique versions of timeless classics. This all-ages, 8 p.m. show costs $18 in advance and $20 at the door. 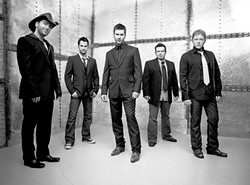 I keep hearing good things about the Ranch, a restaurant in San Miguel that’s reputed to have the best ribs and steaks in the county. Now the business is upping the ante by bringing in live country music, and their very first concert is swinging for the fences. Next Thursday, Feb. 26, Emerson Drive plays a 7:30 p.m. show.

The band’s single from Believe, “Belongs To You,” is already rising up the radio charts, currently at No. 34 and climbing. Marty Renee and the Regulators will open the 18-and-older show. Get tickets through all Central Coast VALLITIX locations including Boo Boo’s, the Mustang Ticket Office, and the Mid State Fair Box Office. Charge by phone at (888) 825-5484. Order online at vallitix.com.

Singer-songwriter and playwright Devin Wallace presents his “Music for Our Great Depression” concert at Linnaea’s Cafe this Friday, Feb. 20 at 8 p.m. Wallace has composed songs for his original dramas and comedies on National Public Radio’s “NPR Playhouse.” Saxophonist Greg McInnes will accompany Wallace. Here’s a taste of his narrative lyrics: “Saw a woman outside a truckstop, she was sleeping in a car/ I went tappin’ at the window, sayin’ “Wake up, honey, I know who you are!”/ Yeah, it was Frankie Lee Batard, we’d dated when were 19/ She sure rang my bell back then, and now we were both so lonely we rang our bells again.” 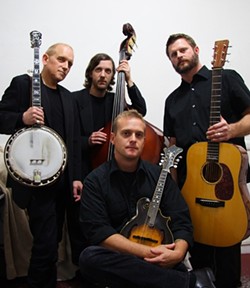 Acoustic folk duo Bog Thistle is returning to town with a bevy of shows. See them Friday, Feb. 20 at 7:30 p.m. in the SLO Down Pub and Sunday, Feb. 22 at 7 p.m. in Linnaea’s Cafe. In between, the boys have three retirement home gigs: Friday, Feb. 21, 1:45 p.m. in the Village at Garden Creek and 3:45 p.m. at Las Brisas Retirement Community; and on Sunday, Feb. 22 at 2 p.m. in Mission View Health Center. “For people who have relatives in those retirement homes, this would be a good excuse to pay them a visit,” said band member Dylan Horst.

Cal Poly’s a cappella group, Take it SLO, will host a benefit concert featuring award-winning group Brandeis VoiceMale on Saturday, Feb. 21 from 6 to 9 p.m. at the Clubhouse at This Old House. Tickets are $5 at the door. All ticket proceeds and 15 percent of food and beverage sales will benefit the Cal Poly student chapter of the Wheelchair Foundation, which is comprised of 27 students from an array of majors. The group is raising funds to send wheelchairs to disabled residents of Oaxaca, Mexico, this summer.

The SLO Blues Society has another hot night of blues lined up for you when John Lisi and Delta Funk plays Saturday, Feb. 21 at the SLO Vets Hall. Lenny Blue and the Otter Guys will open the 8 p.m. show ($20 at the door, $17 for members; free dance lessons at 7:30 p.m.) John Lisi describes himself as a bluesman with a sense of humor. He combines Louisiana funk with a Hendrix-like sound. Lenny Blue and the Otter Guys play a lively musical stew of blues blended with R&B, soul, West Coast swing, funk, and world-beat.

De La Bahía is back and ready to get you dancing. On Saturday, Feb 21 beginning at 8 p.m., the Latin dance band will perform jazz and Brazilian dance standards such as mambos, cha-chas, bossa novas, sambas, and boleros at the Inn at Morro Bay. Admission is $8 at the door.

Glen Starkey doesn’t feel bad and doesn’t feel blue because Frankenstein’s monster was ugly too. Storm the castle at gstarkey@newtimesslo.com.