I’m listening to Little Wings’ November 2000 album Lay in Dirt, one of Kyle Field’s many lo-fi, DIY, alt-folk albums. This one is just burned to an unmarked Maxwell CD-R74 disc, packaged in a clear plastic jewel case, but it has two dirty cigarette butts stuffed in the spine and an empty pack of Marlboro Lights squashed between the back of the case and the disc tray. For a cover, it’s got a square cut out of a box of Barbara’s Shredded Spoonfuls cereal. A tiny accordion-folded paper strip of liner notes and lyrics is the only real indication of what this CD is and who made it.

Most of the songs are tender ruminations on life—beautiful, melodic, and heart-rending. This one’s pretty ribald: 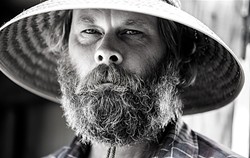 Unpredictable—that’s Little Wings, which formed in San Luis Obispo in the late ’90s with Kyle Field as the group’s only permanent member. Prior to Little Wings, Field was a member of Rodriguez, a SLO Town trio that also included drummer Mike Funk and Matt Ward, who has become known as M. Ward, whose career really took off after he left SLO for Portland. Ward is half of the duo She & Him with Zooey Deschanel, but he’s also recorded with indie rock luminaries Cat Power, Neko Case, and Beth Orton among others. While Ward has certainly had a more high profile post-Rodriguez career, Field has been both more prolific, and for my money, more creatively unique, authentic, and more … “pure,” which is the only way I can describe it. He’s unconventional, a true original, a true artist, and true believer in creativity for creativity’s sake.

Another Little Wings CD in my collection features a postcard for a cover. “Greetings from New York The Wonder City” proclaims the lettering over four photos—the Statue of Liberty, the World Trade Center, Channel Gardens in Rockefeller Center, and the Empire State Building. This time the disc is a little fancier—a die-cut paper label with a doodle of what looks like a wizard with a speech bubble that reads, “I will hypnotize you!” There’s also a skeleton and a squirrel, above whom is a thought bubble reading, “I’m only an innocent squirrel.”

Quirky—Field sees things in ways no one else does. His flexible voice can easily move into falsetto. He vocally bends notes in ways that please and baffle. He’s one of those artists who when you discover him you feel yourself part of a special, secret club because you can’t help but think you’re one of only a handful of people who “get” him. In some ways, I hope his career has reached its peak and that he’ll always be the kind of guy who drives up and down the coast in his pickup truck, surfing, playing shows here and there, and recording new music with friends. I know one thing: He can’t stop creating.

Amazingly, Field now has a Wikipedia page that reveals details such as his Alabama birth, that he’s the son of a football coach, that when he arrived in California he became an avid surfer, that he earned a BFA in 1997 from UCLA and has released a book of drawings, and that he now lives in San Francisco. It makes no mention that Field created the album art for the Grateful Dead’s Hampton ’79 record, though there is a documentary about it on the Dead’s website. There’s also a 22-minute documentary on YouTube that offers a glimpse into Field’s lifestyle—unflashy, unadorned, and thoroughly immersed in surfing, hanging with friends, and making art, both visual and aural.

Maybe some day the world will discover Kyle Field and embrace him, but my dream is he’ll stay a secret to all but his small and loyal fan base. Join the Little Wings club this Saturday, Nov. 7, when Kyle Field plays the Fall Flood Festival at the SLO Grange Hall (5:45 p.m.; all ages; $12 presale at Boo Boo’s or $15 at the door), following the SLO Record Swap (see page 47 for more info).

“It’s a time to celebrate the history of our local independent music scene and often features band reunions, collaborations, and new projects,” according to organizer Carver Cordes. “The festival is named after a Little Wings’ song from the album Light Green Leaves. The singer Kyle Field helped to curate this year’s lineup.”

The evolution of Matisyahu 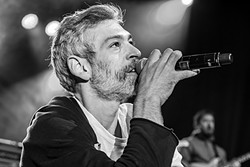 I can only imagine what people thought when Matisyahu hit the music scene with his 2004 debut Shake Off the Dust … Arise. The Hasidic Jew wore the traditional black suit and broad-brimmed black hat over a yarmulke and a full, untrimmed beard. He sang toasting style raps over Jamaican-style dancehall beats, celebrating traditional Judaism.

Was it just a novelty?

Born Matthew Paul Miller, his Hebrew stage name means “Gift of God,” and if his act is a novelty, it’s one fans love—especially his 2005 live album Live at Stubb’s. He’s released four more studio albums since his debut, most recently 2014’s Akeda. He’s also released four more live albums since Stubb’s, most recently Live at Stubb’s III. And he’s also lost the Hasidic trappings, including the beard and yarmulke, which caused a stir in the Jewish blogosphere when he posted a photo of himself clean-shaven on Twitter and released this statement on his website:

“No more Chassidic reggae superstar. Sorry folks, all you get is me … no alias. When I started becoming religious 10 years ago, it was a very natural and organic process. It was my choice. My journey [was] to discover my roots and explore Jewish spirituality—not through books but through real life. At a certain point I felt the need to submit to a higher level of religiosity … to move away from my intuition and to accept an ultimate truth. I felt that in order to become a good person, I needed rules—lots of them—or else I would somehow fall apart. I am reclaiming myself. Trusting my goodness and my divine mission. Get ready for an amazing year filled with music of rebirth.”

On Tuesday, Nov. 10, Otter Productions Inc. brings you  “An Intimate Evening with Matisyahu” at the historic Fremont Theatre (8 p.m.; all ages; $30 general admission; $25 for students; vallitix.com).

“Matisyahu’s long and prodigious career has included touring the world, releasing five studio albums, and selling 3.5 million tracks to date, and now on the 10th anniversary of his breakthrough album Live at Stubb’s, he’s releasing a new album that celebrates the fan favorite original,” according to press materials. “Live at Stubb’s Vol. III takes a new look at Matisyahu’s extensive catalogue with stripped down and reworked versions of favorites such as ‘King Without a Crown.’”

Expect stripped-back arrangements of songs from throughout his career in what promises to be an emotive and poignant concert.

Numbskull, Good Medicine Presents, and SLO Brew have three really diverse shows this week, starting with country act the Josh Abbott Band on Saturday, Nov. 7 (7:30 p.m.; 21-and-older; $18 presale or $20 at the door). One of the hottest acts out of Texas, Talbott’s music seems to keep getting better. “I really feel like this is the band I’ve always wanted,” he said in press materials.

Legendary ex-Misfits guitarist Doyle plays on Monday, Nov. 9 (7:30 p.m.; all ages; $14 presale or $16 at the door). I’m pretty sure this isn’t his given name, but Doyle Wolfgang Von Frankenstein will deliver some of his patented horror-based hard-rock/metal with his band: vocalist Alex Story, bassist “Left Hand” Graham Reaper, and drummer Dr. CHUD.

Malcolm Holcombe, Travis Warren (Blind Melon vocalist), and Vincent Bernardy (NTMA Album of the Year winner) play this Friday, Nov. 6, at SLO Tracks (7 to 10 p.m.; all ages; $15 presale at slotracks.ticketleap.com/slo-tracks-malcolm-holcombe-travis-warren-vincent-bernardy/ or $20 at the door). Underground folk legend Malcolm Holcombe just released The RCA Sessions to commemorate his 20-year musical career milestone. Spanning 1994 to 2014, Holcombe’s retrospective includes 16 self-selected and re-recorded cuts from each of his previous 10 full-length albums and one EP. This one’s going to be special.

Get your Celtic on at the next Red Barn Community Concert this Saturday, Nov. 7 (5 p.m. potluck; 6 p.m. concert; all ages; $15 at the door). Expect music by acclaimed fiddler Winifred Horan (a founding and current member of Solas) with button accordionist Johnny Connolly (a current member of Solas), and West Coast-based guitarist Cary Novotny. This high-energy traditional Irish trio is “blazing new trails in American-based Irish music.”

Mandolin-master Chris Thile plays the Cohan Center in the SLO-PAC this Monday, Nov. 9 (7:30 p.m.; all ages; $24 to $45; call 756-4849). The multiple Grammy Award-winner and MacArthur Fellow—a member of Punch Brothers and Nickel Creek—“is a mandolin virtuoso, composer, and vocalist. With a broad outlook that encompasses classical, jazz, rock, and bluegrass, Thile transcends the borders of conventionally circumscribed genres, creating a distinctly American canon and a new musical aesthetic for performers and audiences alike.” 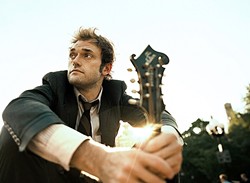