La Esquina Taqueria crests on the corner of surf and turf

There is a pretty big advantage to opening up your new Mexican restaurant around the corner from your already established seafood joint. For one, a hunk of crusty bread or vat of flavorful, fishy broth is never far away.

"The other night, a customer wanted more than the two desserts we have here. So, I told him we had seven more at Ciopinot, and I went next door to get him the blueberry cobbler. Same thing with our chorizo and clams we serve here. Of course we have tortillas and chips to dip, but I was happy to bring over some nice, rustic bread to sop up that great broth."

It's true. Cohen has been known to physically stroll between the two eateries just to make his customers happy (because, well, he can). It's obvious that the longtime restaurant owner loves nothing more than over-delivering.

Perhaps that's why, about four months in, La Esquina has already become something of a dining destination within the rapidly developing SLO Creamery complex.

Of course, it's not just bread and broth that Cohen's brought to this new space, which he and his wife, Wendy, built fresh from the ground up over the past two years.

"I know seafood. I grew up in seafood my whole life," Cohen says.

You probably already know this. Ciopinot opened its doors in 2009 and grew to become a go-to stop for oysters, fresh fish, and the spice-laced, so-comforting stew bearing its name. Nearly 10 years later, Cohen says he's learned a thing or two about delivering seafood, SLO style.

"There's plenty of different kinds of Mexican restaurants in SLO, and there's a lot of restaurants geared toward $2 to $4 tacos," he says. "I get it, but that's not what we're trying to do. We use a large Mexican white prawn in our shrimp tacos. Nobody around here uses those, because it's just too expensive. I figured out what I wanted to offer, and then I set my price point. I didn't set my price point then try to stick the quality under it."

Yes, your taco will cost a little more, but Cohen promises: "It's going to be a very memorable taco."

Other memorable stars of this zesty menu?

In fact, you can order your beef (always aged in-house, three months) rare, medium rare, or well done. The al pastor is super tender, basted and layered with pineapple and bacon, and cooked rotisserie style.

Cohen says it's all about taking "good" unapologetically over the top. 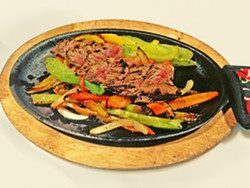 "I just love Mexican food. If someone gives me a plate of fajitas and they are the best I've ever had, versus a fajita that's mediocre, I am going to spend four dollars more for the better plate. This philosophy has allowed me to use a higher quality product," he says.

The restaurant doesn't open till 5 p.m. daily, but maybe that's OK. The menu lends itself to lingering a little longer, laughing a little louder. The covered patio is intimate, and the spacious, airy dining room is peppered with flecks of teal: teal glasses, teal wall accents—plus terra cotta colored plaster, and vibrant, painted tile from Guadalajara. The high ceiling and multiple skylights impart a vibe noticeably posher than your average taco joint.

Of course, the real true co-star of the show is behind the bar: Alongside the many bottles of light, dark, aged, and smoky tequilas, you'll spot glass containers infused with fresh strawberries, bright orange zest, and whatever else might be in season.

"Infused tequila takes the heat off, imparting more of the fruit," Cohen says. "Try a little snifter and you'll be blown away at how smooth the tequila is and how much flavor it has."

Say goodbye to margaritas with glowing sweet and sour mix. Staff go through hundreds of citrus segments per day thanks to a state-of-the-art juicer. Vats of fresh lemon and lime juice make for tangy-tart cocktails that heighten—not dampen—the freshness of the food on your plate.

La Esquina, Spanish for the corner, truly is just that: Located across from Goshi's and just around the bend from Foremost Wine Company and Mama's Meatball (not to mention Ciopinot), this wedge of downtown SLO is certainly elevating, growing, and garnering attention.

The restaurateur knows that it takes a village to raise an eatery, and fresh offerings mean more buzz for everyone.

"It's a positive thing, and to have the whole Creamery remodeled, it's an exciting time," Cohen says. "I feel these are some of the best restaurants in SLO, right here, next to each other." Δ

Hayley Thomas Cain is all about that fresh lime juice. She can be reached at hthomas@newtimesslo.com.