Labor contractors, advocacy organizations agree that the Farm Workforce Modernization Act is the right step forward—now it needs to pass the Senate

Alexandra Allen, owner of Main Street Produce and Freshway Farms, has operated her Santa Maria-based businesses alongside her husband since the '70s. Only in the last few years did they start using the H-2A program, which allows foreign agricultural workers to work in the U.S. on a temporary visa. 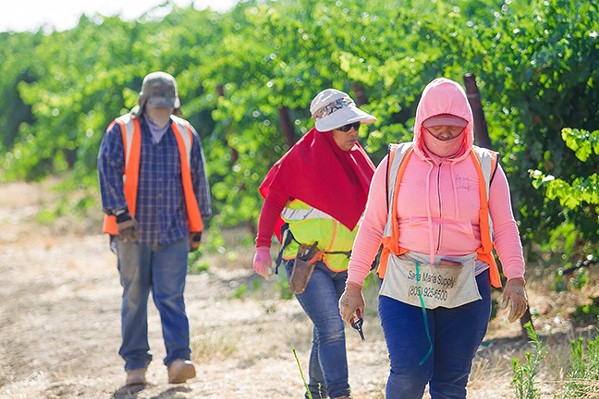 "The H-2A program has been around for a long time, but we, like many growers, didn't pay much attention to it because it just seemed so prohibitively expensive," Allen said.

Those who bring in H-2A labor must feed and house their guest workers and are required to pay them what's called an "adverse effect wage rate."

"The philosophy behind that makes perfect sense," Allen said. "They require you to pay this heightened wage because our government wants to make sure that we are not hiring foreign workers if there are domestic workers available."

But the reality, particularly in recent years, is that there aren't enough domestic workers to cover the farm labor needs in Santa Maria, according to Allen. Her company started by employing a couple of dozen H-2A workers three years ago. It's more expensive, but Allen said they had no other choice. This season, they will bring in about 250 workers.

"Here in the Santa Maria Valley, we produce food that feeds the country and many parts of the world, and that demand is continuing to grow," Allen said. "But the workforce is not increasing commensurately with the demands. As immigration has tightened, as the Mexican economy has improved, we don't have the number of people who want to come to this country and work in agriculture that we used to."

Allen supports the Farm Workforce Modernization Act, a bill recently reintroduced by U.S. Rep. Salud Carbajal (D-Santa Barbara) and a group of bipartisan House members that aims to streamline the H-2A program and provide a path to legal status for farmworkers.

"In essence, we are creating a modern-day guest worker program that would allow employers to address some of the challenges that they have with the existing H-2A program," Carbajal told New Times, such as recruitment, the filing process, reducing costs associated with the visa process, and reforming H-2A wages.

The bill also creates a new type of temporary status called a certified agricultural worker, Carbajal said. Applicants who show that they've worked 180 days of agricultural employment over the past two years and pass a background check can achieve the renewable, temporary status.

Those who earn the status and continue to work in agriculture for another four to eight years (depending on how long they worked prior to the legislation's enactment) can then apply for a green card, if they desire. Achieving this legal permanent residence then allows them to pursue citizenship, just like anyone else who holds a green card, Carbajal said.

The act passed the House on March 18 is awaiting Senate approval. All but one of the House Democrats voted to pass the bill, and 30 Republicans also voted in favor. Pretty much everyone in California agriculture supports the bill, including San Luis Obispo County Farm Bureau Executive Director Brent Burchett.

"We cannot control the weather, or market prices, but we do have the ability to stabilize our agricultural labor force. Our federal government just lacks the political will to do so," Burchett said. "Immigration will always be a controversial political issue, but I want people to understand we would not have food without our agricultural workers."

Burchett expressed his frustration with the "broken immigration system" and increasing labor regulations that have made it difficult to get enough workers throughout the year.

"It's frustrating that while we depend on farmworkers for our literal survival, we are not willing to have a real policy conversation about immigration reform if it includes any sort of pathway to citizenship for undocumented workers. There is never going to be a perfect policy solution," he continued, "but we have to be realistic that a system that relies solely on border walls and deportation is untenable. This legislation is not going to eliminate all our labor challenges, but it certainly is a step in the right direction."

SLO County and Santa Maria Valley farmers want a mix of both H-2A and local workers because while H-2A workers are important to the workforce, it's an extra expense to provide housing and transportation. Farmers don't need to do that for local workers who are available year-round, which isn't the case for H-2A workers.

The Central Coast Alliance United for a Sustainable Economy (CAUSE), a farmworker advocacy organization, also supports the legislation.

"This is really impactful to the Santa Maria economy," CAUSE Policy Advocate Rebeca Garcia said. "It would create a stable workforce for our agricultural industry, while at the same time bringing that needed ease for our farmworker community to feel comfortable in their jobs. That opens up the door for them to become more included in the community."

The certified agricultural worker status "would take away the worry and the fear that a lot of our farmworkers exist with," Garcia said.

"The majority of the nation's farmworkers are undocumented. That's 2.4 million farmworkers ... living with that constant fear of deportation," she continued. "Giving them the status would bring a lot of relief in that way, and then having that path to citizenship on top of that is a new conversation for our farmworkers."

Garcia said CAUSE would like to see H-2A reform legislation go further in protecting and regulating housing.

"Given the pandemic, Santa Maria has specifically seen the consequences of not providing safe H-2A housing that allows people to socially distance," she said.

CAUSE warned early on in the pandemic that the tight living conditions H-2A workers typically have could increase the risk of infection and spread. A July 2020 COVID-19 outbreak among Alco Harvesting workers living in H-2A housing confirmed that fear, when 95 workers were infected and one man died.

Garcia said that the bill's proposed nationwide E-Verify system is a step in the right direction for regulating the guestworker program. It would be phased in after the legalization and H-2A reforms are implemented, Carbajal said.

"This has been a great bipartisan effort, and I think provides a model for how we can work together on our continued immigration efforts that we are no doubt going to be working on," Carbajal said. Δ