As PG&E sweats in the national spotlight after its historic bankruptcy filing last month, the utility giant is also facing questions from San Luis Obispo County attorneys about its latest filing in the Diablo Canyon Power Plant decommissioning process. 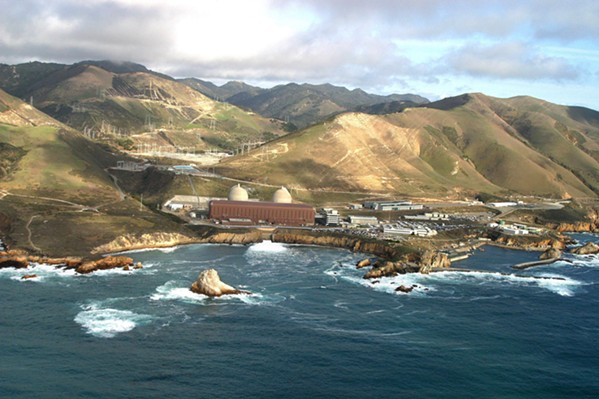 In a decommissioning document filed with state regulators on Dec. 13, PG&E offered little information about its future plans and uses for the land and infrastructure at the nuclear plant once it powers down in 2024-25. That omission—combined with scant mention of a community panel's recommendations for the decommission—has SLO County officials concerned about an "opaque process" that may weaken the public's say in what becomes of the site.

"We not only want a voice or a seat, but we want some influence," SLO County Counsel Rita Neal told New Times. "We want to make it loud and clear to the [California Public Utilities Commission (CPUC)] and PG&E that we're not going away. We're demanding they pay attention to what this community's asked for."

The community's chief interests are that Diablo Canyon's roughly 12,000 acres of surrounding coastline are transferred to conservation entities, that the lands are safely accessible to the public through trails and other offerings, and that PG&E looks at repurposing certain plant infrastructure—like the desalination plant—for the benefit of the community.

"It's thousands of acres of beautiful open-space property in this county," Neal said. "There's a whole infrastructure out there that the county believes we should have input in what happens to it."

Neal's office made that clear in a Jan. 17 filing with the CPUC, which came in response to PG&E's triennial (once every three years) application to recover rate funds for plant decommissioning activities.

PG&E's application spells out a $4.8 billion decommission of Diablo Canyon that will commence immediately after the plant ceases production. According to SLO County, the documents provide little detail on a future land-use plan for the site—or a specific process to determine those plans.

"We want specifics from PG&E, not generalities," Neal said.

The application also suggests that PG&E intends to dismantle the desalination plant, despite the county's hope that it can be used in the future to meet community water needs. The county points out in its response that prior to PG&E's decision to close Diablo in 2016, the parties were in the midst of discussions to utilize unused capacity in the desalination plant to deliver water for community benefit.

"The issue of water in the SLO area is a critical one, particularly with the increased threat of wildfires in California and extreme drought conditions that have persisted with limited relief since 2002," the county's filing reads.

In response to questions from New Times about the county's concerns, a PG&E rep said that deliberations about the future of Diablo Canyon lands and facilities are "ongoing," and that when they "move beyond an evaluation phase, PG&E will bring these proposals to the CPUC as required." PG&E must submit decommission plans and cost estimates again to the CPUC in 2021 and 2024. Commission proceedings for its current application will occur throughout 2019.

"PG&E remains committed to a public stakeholder process ahead of making any decisions on the future use of Diablo Canyon lands and facilities," Suzanne Hosn, a PG&E communications official, wrote in an email.

One of those public commitments is that PG&E will continue to hold meetings of the Diablo Canyon Decommissioning Engagement Panel—a group of 13 community members chosen to represent local interests in the decommissioning process.

The panel met in public more than a dozen times in 2018, culminating in its strategic vision in December. The group's scheduled to meet just quarterly in 2019, starting with a meeting on spent fuel storage on Feb. 22 and 23 from 8 a.m. to 5 p.m. at the Embassy Suites in SLO.

Despite PG&E's assurances of continued public outreach, SLO County warns that it was PG&E that "created the panel, decided who could sit on the panel," and crafted a governance structure where the panel makes no formal motions or votes.

"While the engagement panel's charter states that its purpose is to provide input on behalf of the local community to PG&E, it has more often felt like a platform for PG&E to inform the community of its own agenda," the county filing states.

To New Times, Neal emphasized the broader importance of establishing the county's position of influence in the future of what right now is a privately held corporate asset.

"There's some built-in mistrust in PG&E," Neal said, "and that wasn't helped when they announced [Diablo's] closure without the input of the host community. ... Our biggest issue is whether PG&E's plan adequately addressees the needs of the community." Δ