Lackluster: 'Wonder Wheel' falls short of being anything

From writer/director Woody Allen (Café Society, Midnight in Paris) comes Wonder Wheel, the story of four characters whose lives intertwine amid the hustle and bustle of the Coney Island amusement park in the 1950s: Ginny (Kate Winslet), an emotionally volatile former actress now working as a waitress in a clam house; Humpty (Jim Belushi), Ginny's rough-hewn carousel operator husband; Mickey (Justin Timberlake), a handsome young lifeguard who dreams of becoming a playwright; and Carolina (Juno Temple), Humpty's long-estranged daughter, who is now hiding out from gangsters at her father's apartment. (101 min.)

Ryah As one headline I read put it, now certainly isn't a good time for Allen (who famously had an affair with his girlfriend's adopted daughter) to make a bad movie, but Wonder Wheel is not good, at all. In light of the #metoo movement and ousting of Harvey Weinstein, the tolerance for creeps in Hollywood is pretty low at the moment, and yet Allen picks now to churn out a film that even Winslet and Timberlake can't save. Simply put, Wonder Wheel does not instill a sense of wonder in audiences. Right away our flawed protagonist Mickey breaks the fourth wall while using the most god-awful New Jersey accent, announcing that he is the narrator and a character in the story that is about to unfold. Golly! Visually the film can't seem to decide if Coney Island in the 1950s is charming and romantic or seedy and awful. But Allen's biggest sin is, of course, how he handles his female characters. They are either helpless like Carolina, who is running away from her mobster husband back to the father she abandoned years ago, or helpless and evil like the former actress turned waitress Ginny, who is married to Carolina's dad, Humpty, the raging alcoholic. Ginny is haunted by the love she lost years ago when she cheated on her first husband and also ended a promising acting career. She finds some solace in an affair with Mickey, the handsome lifeguard and aspiring playwright, and then tries to use him as a way out of the life she feels trapped in.

Karen Just to reiterate: This is not the best time for Allen to direct and write a film where women are helpless figures in a male-dominated world. Unfortunately, it's also a world that Allen seems to create pretty often in his movies. A story that should be Ginny's isn't because Mickey, Coney Island's self-proclaimed romantic, takes over the narrative. I guess we're supposed to sympathize with Carolina and Ginny for making their misguided choices in life that got them to their current situations. But I can't help but hate them. Carolina is at least going to night school to change her life, but instead of using money earned from her waitressing job on the boardwalk, she uses daddy's money. Don't get me started on Humpty, who only pretends to be a man but the minute things turn sour he holds onto Ginny as a crutch instead of loving and supporting her emotionally. His favorite phrase throughout the story is telling Ginny that he doesn't want his daughter to wait on tables all her life. But what about Ginny? Doesn't she also deserve more in life than waiting tables? The only glimmer of appreciation I have for the film is its use of light. Very much like a melodrama, the film uses different hues of red, orange, and blue to depict the mood of the scene. When Ginny begins her affair with the younger and overly dramatic Mickey, it's raining, but the hues are orange. It's whimsical, soft, and romantic. Once Ginny is back at home, with her gloomy view of Coney Island, the room is red with angst and her recurring migraines. Cue the desperate swallow of an aspirin and a swig of hidden alcohol from under the sink. 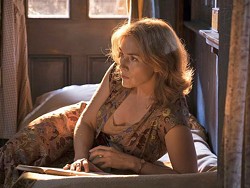 Ryah The real issue here isn't just that Allen vilifies his women and gives them little autonomy, but we've seen this tired old story so many times before. Even though Humpty beats Ginny and doesn't support her emotionally, we're supposed to sympathize with him because Ginny is cheating on him after all. Oh and to round things out, Ginny's young son from her first marriage, Richie (Jack Gore), is a pyromaniac who even sets fire to his psychiatrist's office because, ya know, he has a problem with starting fires. Somehow, this only manages to capture Ginny's attention for a minute or two before she's wallowing in self-pity once more. Things really come to a boil when Mickey meets Carolina and starts to fall in love with his lover's stepdaughter. On the surface, this is already an eyebrow-raising scenario. But the ick factor increases tenfold when you remember that Allen had an affair with his then-girlfriend Mia Farrow's adopted daughter, Soon-Yi Previn, whom he later married. Winslet churned out a stunning portrayal of a woman on the edge of an emotional breakdown, but it wasn't enough to save this lifeless story. While Timberlake is usually a charming triple threat, Mickey still came off as flat, unbelievable, and uncaring. It was my fondest wish that Richie would take Coney Island and everyone on it out in a blaze of glorious flames. We've heard enough about what Allen and other old, white dudes have to say about women and their stories. Time to hand the mic over to capable female filmmakers with better stories to tell.

Karen While I won't give anything away about the ending, it was much like the Ferris wheel of Coney Island, constantly in motion but going nowhere. Don't walk in expecting much from the characters; there isn't much growth or conclusion to the intertwined realities that they find themselves in. The strongest character of the bunch had to be Ginny. Winslet could go from nervous wreck to monstrous with just a change of lighting. Similar to the wheel, though, the storyline ends right where it began, so we're just left in a muddled vicious cycle. I have to say I was also hoping for a hoopla at the end with a big run-away scene or the demise of the ever-tacky Coney Island. But I guess I'll have to be OK with a film that basically amounts to nothing. ∆