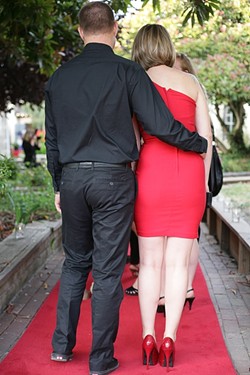 What’s black and red and hot all over? The models and guests attending photographer Joseph Dominguez’ premiere of his Red Project!

It’s Friday, Aug. 5 at 7 p.m. and I’m in Harmony, where the normal population of 18 has exploded to about 150 really well dressed, good looking people, all in black except Joe’s models, who stand out from the crowd in stunning red dresses.

Who are these people? I don’t recognize a soul … until I spot Pewter Plough Playhouse doyen Jim Buckley, now apparently consigned to a wheelchair.

“Tonight’s the preview of our new show, The Woman in Black,” says Jim. “In the 35 years I’ve been running the playhouse, this is the first preview I’ve ever missed.” 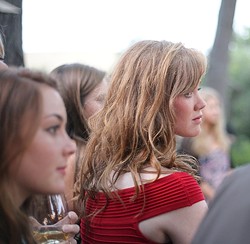 Priorities, eh? When you’ve got a swank event with a DJ, red and black lounge furniture, a fancy culinary spread, and 26 smokin’ hot models, even 98-year-olds in wheelchairs know it’s the place to be.

And there’s my old surf buddy Dale Masten, who’s friends with the photographer and introduces me. Even though no one but Joe and his producer Monica Raethke have seen the images, he agrees to let me in the gallery room early to grab a sneak peak at the fruits of his labor.

Lining one wall are dozens of images, some close-ups, some full body shots, of Joe’s models. Though these young women aren’t professional models, with the hair, make-up, and costuming, they look gorgeous.

“That’s exactly the point,” says Joe, a compact guy who grew up in Santa Barbara but double majored in graphic design and photography at Cal Poly. “I came up with the idea while shooting senior portraits. Young women today are under so much pressure to be beautiful, and I found the experience of taking senior portraits to help reaffirm their beauty. But I would tell them, ‘I’m not here to make you a model; I’m here to record you being you.’ These girls would come out of the photo sessions with a lot of confidence.” 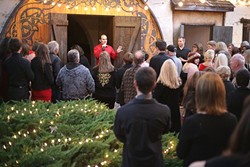 What finally sealed the Red Project idea in Joe’s head was a call from a parent.

“One of the girl’s mothers called me crying, and she said, ‘I’ve never seen my daughter look more beautiful. Thank you!’ I mean, what a testimony to the process. And this project was trying to capture that. It’s bigger than just a photograph, bigger than just a book full of hot girls—anyone can do that—it’s about reaffirming these young women’s inherent beauty. You know, as adults, when we interact with young people, at every point of contact we have a responsibility to inspire, to reaffirm, to build confidence.”

These young models certainly seem like they’re on top of the world tonight, a magical night celebrating real women whose inner beauty was coaxed to the surface, captured, and chronicled. For these 26 young women, this is a night they’ll never forget … and if they do, they can just open the hardcover book ($125), soft cover version ($50), or packages of postcards ($20) and remember.