It was a night of gorgeous women, a lot of laughs, and yes, there was whipped cream involved.

Our friends over at SLO Brew had so graciously invited me to sit on a panel of judges for their fourth annual Rock the Runway Bikini and Lingerie Contest on Aug. 4, and it’s safe to say I now owe them for life.

By the time I got to the event, there was a line literally down the street waiting to get in. Since I was a big shot VIP, I felt a certain air of entitlement. So I skipped the line and told the bouncer I was a judge and required early entry.

“Yeah, sure. That’s good one,” the doorman said with a grin.

Apparently he’d heard that one before.

After we sorted through that initial confusion, SLO Brew’s awesome event coordinator Bria Holub—who pretty much single-handedly organized the night’s festivities—introduced me to my fellow judges in our VIP booth. I was a bit starstruck over getting to sit and drink beers with Jeff Kingman and Jeremy West from Jeff and Jeremy in the Morning on KZOZ FM. Good guys.

There was the dazzling Miss Amanda Brown, owner of adult-themed party supplier Coming Attractions, who so graciously donated the pole for the party.

And then there was Dylan Brown, the luckiest man in the room. You see, Dylan’s a server at SLO Brew. On this grand evening, however, he was rewarded for his loyal service with a spot at the judge’s booth.

“I’ve been waiting for this my whole life!” Dylan shouted, hoisting a Corona into the air.

General Manager Monte Schaller brought us some drinks, plopped a massive plate of nachos in front of me, and we kicked back as the crowd filed in before one of Amanda’s beautiful employees treated us all to a little pole dancing. 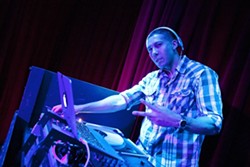 I spotted my buddy Hank Bueno—yes, that’s his real name—who came to support his special lady friend, Sara, who was lovely contestant No. 9. I asked him how he felt about a room full of guys leering and hooting at her, and he said it didn’t bother him in the least. In fact, he said they both see the contest as empowering.

“As long as they keep it classy,” he said.

D.J. Flight spun the jams, and Cavin—or Brother C, our M.C. for the evening—was freaking hilarious. “All right everybody, don’t get ridiculous,” he warned an especially motley bunch in the front row. “And don’t be touchin’ nobody.”

The contestants filed out for Round One—the bikini round—each looking absolutely stunning, thanks in part to HepKat volunteering their services for contestants. They each did a little cat walk, went for a quick whirl on the pole, then fielded a question from us judges. This was clearly Dylan’s time to shine. That guy was Johnny On-the-Spot with those questions! Most of them were something along the lines of, “If you were a musical instrument, what would you be and why?”

To that, contestant No. 2, Erica, responded, “I’d probably be a drum, because I like to get …” Well, you get the idea. Aaaaand the crowd went wild.

In between rounds, there was a delightful hula-hoop contest, and I was smitten. Then came the lingerie round. Things got really interesting when Dylan tossed a can of whipped cream onstage. The guy’s a genius!

By the end of the evening, my face was sore from all the laughs, my stomach chock full of nachos, and my hormones raging in full force.

The very lovely Mariah Navit Stuart was clearly the crowd and judge favorite in every round, and the North Carolina native took home the first place prize of $1,000. Equally ravishing runners up Katelyn Judson and Jade McClellan took second and third, earning $250 and $75 respectively.

My hat goes off to all contestants who rocked it that night, and to my friends at SLO Brew, you made this writer a very happy man. You’re a 10 on my scorecard.

Staff Writer Matt Fountain judges not, lest he be judged. Reach him at mfountain@newtimesslo.com.