These days, you’d think we’d be past the era of women as second class citizens, but as Donald Trump recently proved, we may have come a long way, baby, but not all the way.

When the comb-over-Cheetos-fascist suggested that Ghazala Khan, the Gold Star mother of fallen U.S. Army Captain Humanyun Khan, wasn’t allowed to speak during her and her husband Khizr Khan’s appearance at the Democratic National Convention because of her Muslim faith, Trump proved he hasn’t joined the rest of the human race in the 21st century, where women are equal to men.

“In many parts of our world, being a strong woman is not encouraged or embraced with open arms,” festival organizer Shea Kelly said in press materials. “As a music teacher in San Luis Obispo, I spend my time not only teaching the love of music, but mentoring my students to believe in their abilities, dreams, and the power of creativity. My male students seem to have an easier time finding their path. Sometimes they are afraid of their individuality or what others think of them, but it’s almost always the girls that have the hardest time coming of age.”

Ladyfest is an opportunity to celebrate all things female, encourage female empowerment, and also enjoy some kickass music. Kelly herself is in Hot Tina and Off Center & the Holes, two of the more than two-dozen bands at the event. The music will come fast and furious on three stages. The entire schedule is available on the festival’s Facebook page, facebook.com/events/1690731771188059.

“Two summers ago, I was brainstorming with a zine-writing feminist friend, and we decided that having a festival for women by women would be a great platform to use the word ‘feminist’ and show that if you like women and care about them you were a feminist; and also to get the ladies of our small music scene together to show solidarity and presence,” Kelly added. “Much like music scenes elsewhere, the live music scene in SLO is male dominated—from the acts, to the venues, to the bookers, staff, sound engineers, and production companies. Of course there are exceptions to the rules, but as a woman trying to be a part of something, there’s no way but to identify that men are the dominant figures!”

“It was amazing,” Kelly gushed. “The camaraderie and self empowerment the ladies felt was beyond anything I could have imagined. This was one of the first times these ladies experienced writing songs and playing louder and kinda unorganized and not caring what other people thought, that it wasn’t Beyonce or Taylor Swift, over-produced, American Idol-ed, and ‘perfect.’”

We’re talking about Grrl power, baby! Kelly makes it clear that though it’s called Ladyfest, “It’s open to everyone who thinks women are great as well as anyone that has felt like a minority and that their voice hasn’t been heard. My wish for this event is for everyone to spread the love and realize that we’re stronger as a culture when we’re supporting everyone instead of trying to divide them.”

“Seven in 10 girls believe that they’re not good enough or don’t measure up in some way,” Kelly concluded. “Ladyfest II is a resounding response shining a light on female empowerment and helping change that cultural norm.”

All proceeds will be donated to MUSE Arts Education, a San Luis Obispo nonprofit that awards musical scholarships and/or musical instruments to people suffering from financial hardships or physical disabilities.

Like The Dubliners and The Pogues, Flogging Molly has turned Celtic folk into boisterous punk. From pirate-themed songs like “Salty Dogs,” “Cruel Mistress,” and “Seven Deadly Sins” to political anthems like “What’s Left of the Flag” and “Rebels of the Sacred Heart,” this band knows how to turn up the volume. They also, however, have a softer side as evidenced by laments like “Far Away Boys” and “Life in Tenement Square.”

Drinking, poverty, love, and death—their themes are right out of the Irish artist playbook, played crisply and with gusto. Formed in 1997, they have five studio albums and a live album under their belts, and they put on a terrific show.

Due to their punkish nature, the show will feature a “General Admission Pit” in the front if you’d rather mosh than sit. You must have a GA Pit ticket to enter that area.

“We’re not a traditional band,” Dave King said in press materials. “We’re influenced by traditional music and inspired by it, but without question we put our own twist on it.”

New Orleans is a one-of-a-kind place, with its own distinct culture, cuisine, and music. The famed second line tradition has its roots in the city’s old “jazz funerals”—processions through the streets with the first line being the funeral party who secured the proper permits and the second line being hangers-on and brass band musicians.

“That’s what we came up under,” snare-drummer Jenard Andrews of second line bands like the ReBirth, Dirty Dozen, and Lil’ Rascals Brass Bands said. “Now we’re trying to take that sound and bring in some new stuff and expand it. We bring outside influences like Earth Wind & Fire and Brass Construction, trying to interpret a different song for every genre, and make it all our own sound.”

Most of the members have been playing music since they were toddlers and count such New Orleans legends as James “12” Andrews, Troy “Trombone Shorty” Andrews, Topsy Chapman, Karl Leblanc, and Bruce “Sun-pie” Barnes as family members. The band is looking forward to being ambassadors of New Orleans culture.

“We can’t wait,” Andrews added. “It’s a new breed of music that we’ll be bringing to our culture, and we hope to create a new sound for our city in the process.”

Good Medicine Presents will also host Gregory Alan Isakov and the Ghost Orchestra next Thursday, Aug. 11, at the Fremont Theater (7 p.m.; all ages; $25 to $36 at ticketfly.com). Imagine a really poignant singer-songwriter with a lush string orchestra behind him and you’ll have an idea of what Isakov and his Ghost Orchestra is all about. More on this next week. 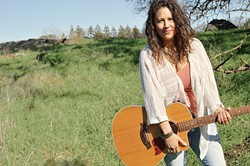 The Red Barn Community Music Series presents the great Mark Heyes and Phil Salazar in concert on Saturday, Aug. 6 (5 p.m. potluck, 6 p.m. show; all ages; $15 at the door). This award-winning guitarist and champion fiddler will provide an evening of well-crafted songs drawn from their long careers.

Hank Biggs and The Hardtops will bring their old school rockabilly stylings to Frog and Peach on Saturday, Aug. 6 (9 p.m.; 21-and-older; free). If you like Carl Perkins and Bill Haley and The Comets, this is the show to dance, jump, jive, swing, shake, rattle, and roll to.

Allen Stone brings his blue-eyed soul to Castoro Cellars this Sunday, Aug. 7 (doors at 6:30 p.m.; all ages; $30 presale at castorocellars.com or $35 at the door). He’s a soulful singer who writes great songs like the politically astute “American Privilege.”

Australia ukulele whiz Azo Bell will offer a workshop and concert on Monday, Aug. 8 (6:30 workshop; 8 p.m. concert; $20 for both at the door or at sloma.org.), in the SLO Museum of Art.

The eighth annual New Times Music Awards is accepting entries through Monday, Aug. 22. You can enter the songwriters’ contest, submit songs in the various genre categories, or submit an album for the Album of the Year contest. Our panel of judges will decide the winners, who will be invited to play the awards show on Friday, Nov. 11, in the Fremont Theater. You’ll find an entry form on page 5 of this week's issue, or online here. And good luck!