You won't find directions to West Cuesta Ridge a spectacular hike that includes unfettered views of the Morros, a forest of Sargent Cypress, and rolling hills as far as the eye can see in the Sierra Club's San Luis Obispo County Trail Guide. It's not that those in the know are colluding to keep this pristine area a well-guarded secret. It's that portions of the trails traverse private property, and trespassing hikers must scramble over locked cattle gates and squeeze through barbed wire fences. Another hazard is the trail's proximity to Camp San Luis Obispo, where many an errant hiker or mountain biker has wandered. 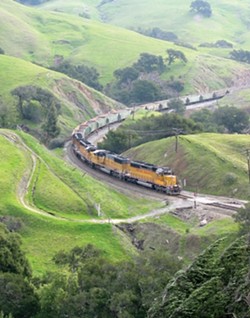 # Public access will become easier and safer if the Land Conservancy of San Luis Obispo County is able to acquire the funds necessary to complete the purchase of three parcels just below West Cuesta Grade. The group has entered into a deal with Camp San Luis Obispo and the Morro Bay National Estuary Program to purchase 315 acres from the Union Pacific Railroad. The three parcels, located between U.S. Forest Service land and Camp San Luis Obispo, provide access to scenic trails used by hikers, mountain bikers, and horseback riders.

"The goal is to secure legal and managed access for Shooters and Morning Glory Trails," said Robert Hill, conservation director for The Land Conservancy.

"This acquisition is an opportunity to clear up confusion about where the military lands are," he added.

Another goal is to ensure that the land is never developed. The parcels are considered significant because they comprise the headwaters of Chorro and Stenner creeks, which flow to Morro Bay and the San Luis Obispo Creek, respectively, and are steelhead trout habitats.

"These are potentially properties that could be developed," said B.K. Richard, vice president of the Land Conservancy Board of Trustees. "[Development] could do significant damage to the streams and visual landscape."

The purchase price of the three parcels is $448,000. Camp San Luis Obispo is contributing $350,000 for the purchase through its Army Compatible Use Buffer Program. The Morro Bay National Estuary Program, which has an interest in protecting Chorro Creek, is donating $49,000. That leaves $60,000 for The Land Conservancy to raise by mid-December to cover its $49,000 share of the purchase price, as well as the appraisal and closing costs. To date, the group has raised $25,000, of which $5,000 was donated by the Santa Lucia Chapter of the Sierra Club.

Hill is confident that The Land Conservancy will be able to raise the rest of the funds by the Dec. 19 escrow closing date.

"San Luis Obispo has always demonstrated their commitment to land conservation and open space when needed," he said.

The Union Pacific Railroad property will be the Land Conservancy's first acquisition in partnership with Camp San Luis Obispo. Under an agreement between the two organizations, The Land Conservancy can apply for funds each year to help purchase lands that buffer the camp's military installation.

"We want a buffer so we don't have to worry about development on our boundaries that's not compatible with military training," said Lt. Col. Kelly Fisher of Camp San Luis Obispo.

The partnership is scheduled to last through 2013.

"It's an exciting funding source that could help us do projects for another seven years," the Land Conservancy's Hill said.

Fisher said that the purchase of the railroad properties will enable both the military and The Land Conservancy to put up fences and signage to help keep the public off the military installation. She said the camp has a problem with mountain bikers dropping in and cutting across the military's Surface Danger Zone an area where the weapons are aimed.

"We want to provide a safe area for the public so they're not inadvertently on the camp," she said.

Once the sale is complete, The Land Conservancy hopes to gift the land to the city of San Luis Obispo, which already owns land adjacent to the three parcels. The city would then be responsible for maintenance and liability issues.

"We're really excited," said Neil Havlik, Natural Resources Manager for the city of San Luis Obispo. "This is an example of a really good partnership working at its most efficient."

"If the city sells the property, the restrictions go with it," said Gary Felsman, president of the Land Conservancy Board of Trustees.

The Land Conservancy has conserved 8,500 acres since it was incorporated in 1984. If it raises the $60,000 needed to purchase the railroad properties, that number will soon jump to 8,815 acres. And if it's successful in its capital campaign, hikers just might find a description of the West Cuesta Ridge hike in the next edition of the Sierra Club's San Luis Obispo County Trail Guide.

Send comments or ideas to freelancer Shawna Galassi through the editor at rmiller@newtimesslo.com.