Critics refer to Lar Lubovitch’s work as both romantic and athletic, often within the same sentence. Passionate is another word that the choreographer hears a lot, although he denies—somewhat pugnaciously—that audience or critic response influences his creative process.

“I’m doing what I’m doing because it’s what I do. I do this because it’s the love of my life,” he said. “It’s a theater form and it happens to take place in front of an audience.” 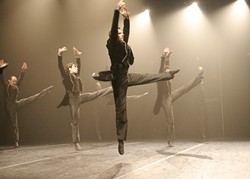 Lubovitch has been pursuing his passion for dance for more than 40 years, across the stages of Broadway and the cold, slick arenas inhabited by ice dancers. But the project that will bring his romantic, athletic, and passionate work to sunny San Luis Obispo—far from Broadway and ice rinks—is the dance company that he founded exactly 40 years ago. Operating from New York, though the Chicago-born Lubovitch still has strong ties to the windy city, the dance company’s stated mission is three-fold: to create new works, to perform these works, and to generate appreciation for dance. On Oct. 25 the company will perform Men’s Stories, Jangle, and Dvor?k Serenades at the PAC as part of the group’s 40th-anniversary tour.

After four decades and more than 100 completed works, the 65-year-old choreographer must make a special effort to ensure that each new piece is cutting edge. Though his work is often characterized as modern, Lubovitch draws freely from various stylistic genres, including ballet and tap, insisting that he doesn’t limit his work with a specific movement vocabulary.

“Sometimes we’ve had to make radical steps to make sure that the reason we exist is as a creative entity,” he acknowledged. “It’s necessary to keep my imagination alive. After I complete a piece I try to do something next that, to some degree, I haven’t done before to sort of raise the stakes or challenge my beliefs.”

Each new dance begins with a piece of music—a composition by Akira Miyoshi, Bela Bart€k, Mozart, Duke Ellington, George Gershwin, Bach, or Philip Glass, which Lubovitch seeks to make visible in dance. He pursues the right music in the manner that some artists might hunt down their muse, knowing that he will use all of the creative tools at his disposal to construct a visible dimension for the melody.

Since the commencement of the new millennium Lubovitch has completed nearly 20 new pieces, three of which will be performed by his company at the PAC on Oct. 25. The most recent, Jangle, was completed in 2008 and is performed to Bart€k’s Four Hungarian Dances. Dvor?k Serenade is a 25-minute piece performed

by 12 dancers to music by AntonÃn Dvor?k, and was referred to by a Dance Magazine reviewer as “an example of the most romantic extreme of Lubovitch’s work.” The longest (55 minutes) and oldest (completed in 2000) of the three has become something of a signature piece for Lubovitch. Men’s Stories, with a commissioned score by Scott Marshall, is a collage of male experiences communicated by nine of the company’s male dancers. 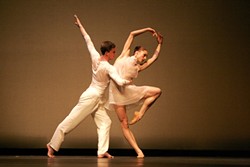 “Men’s Stories is about the stories that hide behind the external behavior, particularly with regards to dance,” explained Lubovitch. “When I see people dance they tell a story about themselves and it’s not the story the choreographer wanted to tell.” As Lubovitch explores the roles and spaces that are every male’s social birthright, the dance unfolds into individual narratives before re-forming into a collective tale. These stories aren’t specifically focused upon the experiences of male dancers, but instead set about more generally examining the way that men exist within the world.

When selecting new dancers for his company, Lubovitch looks for performers endowed with what he calls “movement imagination.” This particular quality lends an added depth to Lubovitch’s curvaceous style and non-ironic perspective. Of course, the final dimension to any performance, the question mark punctuating every concert, exhibit, and play is the audience. Will there be one, and—if so—what will the reaction be?

INFOBOX: But will there be birthday cake?

The Lar Lubovitch Dance Company will be performing at the PAC Oct. 25 at 8 p.m. Tickets cost $48 and can be purchased at www.pacslo.org.

Arts Editor Ashley Schwellenbach has a movement vocabulary that is both non-romantic and ironic. Send a dictionary to aschwellenbach@newtimesslo.com.