Are you guys ready for the end of an era? Maybe a better way to put that is: Are you ready for the start of a new one? In this case, when one stage shuts its lights off, another one takes its place. It just won’t be downtown, and it won’t be for a while. This upcoming weekend will be the last for music at SLO Brew’s Garden Street location. Not to worry, the spots on Higuera and out at The Rock are coming soon (spring 2016 is what the website is saying).

I, for one, am a little sad. Get your hips ready, because it’s going to be a booty shakin’ goodbye.

On Friday, Dec. 18, Captain Nasty hits the Brew with their funky stylings, plus Samba Loca and Wordsauce at the “Funky Xmas Sweater Party” (7:30 p.m.; 21-and-older; $10 presale or $14 at the door). So wear something ugly, red, and green, and a loose pair of jeans—you don’t want to rip a hole in those as you get down with that funky stuff! I’ve done it: It’s cold and not pretty. 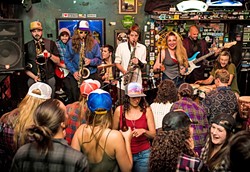 Captain Nasty is the Central Coast’s own nine-piece afrobeat funk ensemble. This group of horns, percussion, axes, and ivory won the open genre category at this year’s New Times Music Awards as well as Best Live Performance. They play only the tastiest grooves!

Wordsuace is an eight-piece hip-hop band out of San Luis Obispo. Built on the idea of cross-contamination, the Sauce brings together members and “has thrived on the open-mindedness of the songwriting process and has established a sound that captivates crowds of all demographics,” according to the band’s website. 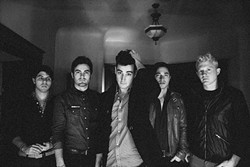 Since the 2010 release of their full-length album Into the Roaring, the Night Riots haven’t looked back. Rolling Stone magazine dubbed them “one of the top 16 unsigned bands in North America,” MTV has aired the singles “Some Nights” and “Chase the Sky,” and MTV Buzzworthy called Night Riots “one of the most critically overlooked bands of 2012.”

Their sound has been compared to bands such as U2, The Flaming Lips, and Gaslight Anthem—or as they describe on their website “a modern day Cure with early U2 bravado.”

Having moved on from their small-town roots, Night Riots have since shared the stage with artists like Death Cab for Cutie, Angels and Airwaves, The Strokes, Hozier, Awolnation, Aerosmith, and many other bands. They also played the 2015 Vans Warped Tour.

Wiley Ray and the Big O Band, a regionally touring musical group, pay tribute to one of the greats in singer-songwriter history through a full-scripted musical theater re-creation of Roy Orbison concerts at the San Simeon Lodge and Restaurant on Friday, Dec. 18, at 8 p.m.

Roy Orbison Returns will show for one night only as part of its California Tour with Ray portraying Orbison. Included in the 90-minute shows are songs representative of 30-plus years of musical history from his earliest Teen Kings rockabilly days through doo-wop and on through the ’60s into the MTV era.

Where did this start? In a karaoke bar in 2004, when country western singer Ray was enticed into performing “Pretty Woman.” That little ditty blossomed into Ray’s desire to keep Orbison’s music alive.

The concert includes many of his most popular songs including: “Only the Lonely,” “Claudette,” “Crying Over You,” and “Pretty Woman.”

The lodge and restaurant are located at 9520 Castillo Drive in San Simeon, 3 miles south of Hearst Castle. Tickets are $20 or comped with purchase of a dinner entree. 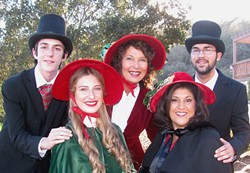 The tours feature “wine by Alapay Cellars, cider, savory and sweet treats, beautifully decorated historic buildings, and our ‘living history’ tours where all docents will be dressed in period attire,” explained organizers. “This is one of our signature events, and all proceeds help to benefit our ongoing restoration, education, and preservation projects.”

The Cuesta Holiday Choir Concert will be performing twice this weekend, Saturday, Dec. 19, and Sunday, Dec. 20. The Cuesta Chamber Singers, Voce, Encore, and the Concert Choir will sing their student hearts out on Saturday at the Cuesta Cultural and Performing Arts Center (CPAC), (7:30 p.m.; $15; $10 for students) and on Sunday at St. Timothy’s Church in Morro Bay (3 p.m.; $15; $10 for students).

On Sunday, Dec. 20, join the SLO Wind Orchestra for their annual holiday concert at the CPAC (3 p.m.; $20 for adults: $10 for students). You’ll hear some great seasonal music, including Samuel Hazo’s “Rest,” which was composed around “God Rest Ye Merry Gentlemen”; “A Hanukkah Festival,” a medley of three traditional Hanukkah songs; Alfred Reed’s mighty “Russian Christmas Music”; and more. If you can’t hear that sweet holiday favorite without singing along, you’ll get your chance that night at the CPAC with a traditional sing-along! Tickets are available at cpactickets.cuesta.edu and at the door. Parking will be free! But only in Lot 2, right outside CPAC’s doors.

The Arroyo Grande Rotary Club is hosting its eighth annual Christmas and Holiday Concert and Sing-Along on Sunday, Dec. 20, at the Clark Center (4 p.m.; $12 for adults; $6 for children).

The “Twelve Days of Christmas!” program will highlight many of the 12 elements of the song with special performances by numerous guest artists: Village Carolers of Studio Sing, Sing, Sing; the Arroyo Grande High School Band; the Central Coast Celebration Chorus; dancers from Coastal Dance and Music Academy (CDMA); dancers from the Studio of Performing Arts (SOPA); Gemma Campbell from Ballet Theatre San Luis Obispo; dancers from the St. Andrew’s Greek Orthodox Church; The Grande Bell Ringers from the Arroyo Grande United Methodist Church; the In Time Trio; and pianist Dave Alm, who will accompany many of the numbers.

The Rotary Club is expecting the show to sell out, so tickets for this holiday extravaganza should be purchased in advance to assure a seat in the theater. Everyone will be invited to join Santa Claus for complimentary holiday goodies and hot drinks in the lobby after the show. Visit agrotary.org for more information.

Get out there, enjoy the freezing temps and holiday concerts, and cross your fingers that Glen Starkey comes back soon!

Camillia Lanham is the New Times editor. Contact her at clanham@newtimesslo.com. Glen Starkey returns on Jan. 7, 2016.