Going, Going, Gone exhibit zeroes in on mass extinction of plants and animals

Going, Going, Gone: Art in the Age of Extinction
will be on display at Studios on the Park in Paso
Robles through Sept. 24. Featured artists include
Eve Provost Chartrand, Joshua Coffy, Helen K. Davie,
Debra Jury, Karen R. Schroeder, Paula Teplitz, and
Sara Woodbury. The gallery will also host a mead
tasting starting at 3:30 p.m. on Sept. 9 with
a screening of More Than Honey at 5 p.m. at
Park Cinemas. A cedar blessing ceremony will close
out the exhibit on Sept. 24 at 10:45 a.m. Visit
studiosonthepark.org for more information and events.

Within the next 300 years, 75 percent of the species of plants and animals we now know of will be gone. Let that sink in.

It won't be the first time. Earth has already begun to experience the effects of the sixth mass extinction of flora and fauna. The last one happened about 65 million years ago, triggered by a meteorite crashing into the planet. 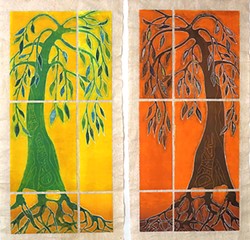 With this sobering information in mind, Studios on the Park in Paso Robles chose to shed some light on the issue in the exhibit Going, Going, Gone: Art in the Age of Extinction. The show is on display through Sept. 24 and aims to raise awareness about the fate of this fragile planet and all of its inhabitants.

"When I'm out in nature it's just a sense of solace and energy at the same time," Woodburn said. "Being in that space is quite inspiring."

One of her pieces, a woodcut collaboration with Karen R. Schroeder, Climate Change: We Are Part of It, shows one tree with the word "change" carved into it prospering, while another tree with "denial" on it withers away. It's a direct nod to the ongoing "debate" and general sense of helplessness surrounding the climate change issue. "Thinking about climate change, I think this is an important time to recognize that all levels of individuals are responding to this. I want people to come away thinking, 'I'm part of it, there are solutions.'"

If Schroeder and Woodburn's piece is a nod to the future and what might be, then Templeton artist Helen K. Davie's work is a somber homage to the past and just how much we've already lost. Davie works in a water media known as gouache—it has an opaque look to it that comes from layers of glaze. She created a series of 12 paintings that feature animals that have become extinct within the last 100 years, like the California Grizzly Bear, Xerces Blue Butterfly, Golden Toad, and more.

"There's just an increasing rate of extinction and I think my pieces will show that," said Davie, who grew up camping and exploring nature as a Girl Scout. "I've always just felt more akin to animals than people. Animals don't have a voice. We make decisions for them." 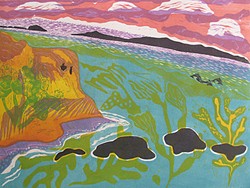 To round out the show, Studios will also host events like a mead tasting and movie screening of More Than Honey, a talk on the endangered steelhead trout, and a cedar blessing ceremony to close out the exhibit.

Aside from driving home just how dire the situation on our home planet has become, Davie wants viewers of the show to leave with a sense of hope, that the tide still might be changed.

"I want there to be more awareness," Davie said. "We're going to need to work harder, and I want people to feel like they can help." Δ

Arts Editor Ryah Cooley does not consider climate change to be a debate at rcooley@newtimesslo.com.