When Ozomatli formed in 1995, they had a lofty goal in mind: to create a style of music that pays homage to eclectic Los Angeles street culture, from the Mexican songs that influenced their youth to reggae's dancehall vibe and its socially conscious lyrics to the hip-hop tracks that explored their urban reality.

They released their self-titled debut in 1998 and were quickly tapped to open for Carlos Santana on his Supernatural world tour. Since then, they've consistently delivered critically acclaimed albums, including a kids' album, Ozomatli Presents Ozokidz, and they've become the de facto house band for Gabriel Iglesias's TV show Gabriel Iglesias Presents Stand Up Revolution. 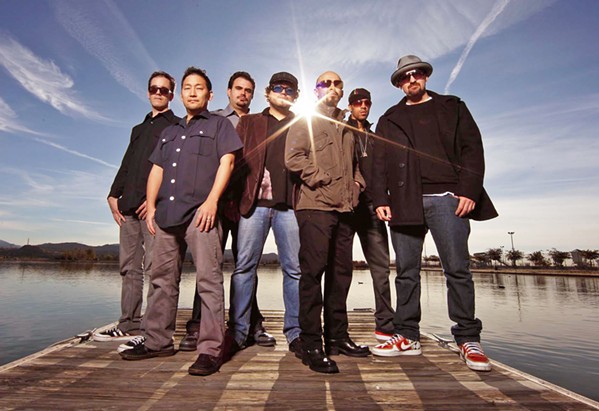 Thematically, their music celebrates Latino culture, fights for workers' rights, and promotes inclusivity of all peoples and cultures. In 2002, they won a Grammy Award for Best Latin Rock/Alternative Album for their second album, Embrace the Chaos. Their third, Street Signs, won a Latin Grammy for Best Alternative Music Album in 2005. This sextet, often called "Los Dioses del Baile" (The Gods of Dance), delivers an amazing live show—tons of energy, danceable sounds, and an inspiring message.

Their newest album, 2017's Non-Stop: Mexico to Jamaica, "continues creating music for entire families and communities," according to press materials. "By re-creating these classic Latin songs, Ozo redefines their meaning and reimagines their beauty for generations to come."

As percussionist and MC Justin Poree, puts it, "Anyone who is 8 or 80 will recognize 'Sabor a Mi' or 'Besame Mucho.'"

There are cover bands and then there are The Cheeseballs, a band that transcends "cover band" categorization. They're simply too musically tight, too flamboyant, and too stage savvy to fit in the same category as the three aging high school buddies taking requests for "Free Bird" at the corner bar.

The San Francisco band is fronted by Eric Cotton, who used to live in SLO and fronted the original reggae act Rock Steady Posse. His new band includes two female singers who are either backing Cotton or taking lead vocals. That diversity allows The Cheeseballs to deliver incredible versions of everything from Bruno Mars' "Uptown Funk" to Lady Gaga's "Just Dance" to Etta James' "At Last." As noted, the backing band is musically amazing!

At its heart, this is a high-energy party band, with synchronized dance moves and an eclectic and rotating repertoire of mostly funk, soul, R&B songs, and more—from '60s Motown classics to '80s new wave, all the rock favorites, and current hits.

This Saturday, Jan. 13, Numbskull and Good Medicine Presents teams with Morro Bay's The Siren to host The Cheeseballs (8 p.m.; 21-and-older; $15 presale at ticketfly.com or $20 at the door). It's going to be a par-tay!

Your cure for depression

Colorado-based psychedelic reggae-rock act Zolopht, not to be confused with the anti-depressant Zoloft, does not cause drowsiness, decreased sex drive, or mild nausea (actual side effects of Zoloft), but they may cause uncontrollable dancing, head-bobbing, grooving, and ear-to-ear grinning.

Formed in 2009, they've since become a principal player in the Colorado music scene, describing their sound as "entirely unique" and "as catchy as it is progressive."

The band has shared a stage with the likes of The Wailers, Robert Randolph and the Family Band, Dirty Heads, Jeff Coffin, Sam Bush, and Eric Krasno. They've recorded two full-length albums and have another on the way.

Casey Stickley of the band Second Echo, a Las Vegas-based alternative rock act, will do a solo set during The BanjerDan Show on Thursday, Jan. 11, at Last Stage West (6 p.m.; all ages). Second Echo is on the Spectra Music Group/Tabletop Records label, has been touring since 2006, and has been featured on more than 100 radio stations nationwide, with licensed works with several major TV networks including MTV, E!, Oxygen, Fox Sports, and NASCAR. 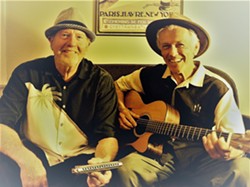 If you've never caught some live music at Puffers of Pismo, this Friday, Jan. 12, is the time. The intimate wine bar in downtown Pismo Beach hosts The Duo-Tones—singer-songwriter Ted Waterhouse (slide guitar and vocals) and Johnny Johnson (harmonica and vocals)—playing a free show from 6 to 9 p.m. Waterhouse is an award-winning songwriter and fine slide guitarist, and Johnson blows a mean mouth harp! Expect blues and related music.

Juan John (aka John De Hoyos) plays Last Stage West on Friday, Jan. 12 (6 p.m.; all ages). The Nashville-based guitarist will deliver a world-class acoustic performance fusing popular music, guitar virtuosity, and humor. He's opened for everyone from Hank Williams Jr. to Lee Brice to Charlie Daniels, and he's also a spokesman for McPherson Guitars. He's on the West Coast for the upcoming NAMM Show, so catch his act now because he may not be back for a while! He's a helluva fingerstyle guitar player! 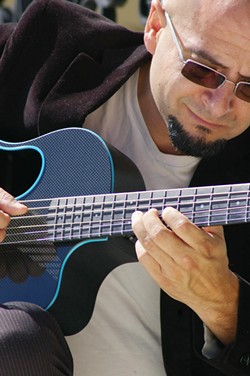 If Johann Sebastian Bach is more your speed, Cal Poly presents Bach Week from Tuesday, Jan. 16, through Saturday, Jan. 20, at various locations on campus as well as the SLO Mission.

"Bach Week features a range of events, including a chamber music performance on period instruments, collaborative performances of large vocal and instrumental works by students and professionals, two master classes, and a guest lecture or 'Akademie,'" according to the university.

A complete list of events is available at bachweek.calpoly.edu; admission is free to the campus events. Tickets for the concerts in the mission are $20 for premium public and premium student tickets, $15 for the general public, and $10 for general students; call (805) 756-4849. Why did Bach have so many children? Because he didn't have any organ stops! Δ