Laugh at the everyday with Brian Regan at Vina Robles Sept. 13

There’s a reason heavyweight funnymen Jerry Seinfeld and Patton Oswalt tip their proverbial hats to Brian Regan. Since his 1992 televised special, Something’s Wrong with the Regan Boy, he’s never stopped working. The guy lives to perform, whether he’s chewing the fat with David Letterman (he’s appeared on The Late Show a whopping 26 times) or working an intimate crowd at a club near you. He’ll record the first-ever live stand-up special in Comedy Central history later this month at Radio City Music Hall—but before then, he’ll cruise into Paso Robles’ Vina Robles Amphitheatre. I caught up with the 2014 American Comedy Award Best Concert Comic over the phone, where we talked touring, ’90s fashion, and the joy of stand-up. 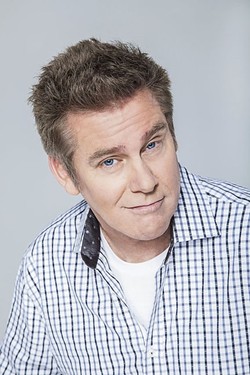 NT: So, where have you been on your tour thus far?

BR: The tour is basically never-ending. As Johnny Cash used to say, ‘I’ve been everywhere, man.’ A lot of tours, especially music tours, have a start and end. I am always touring. I have been on tour for 160 years.

NT: I was going to ask you about that—about your longevity. I was watching your stand-up on YouTube today, and each video it goes farther and farther back. Your outfits get weirder and weirder.

BR: Some people are using comedy to get something else: a TV show or acting career. I like stand-up in and of itself. To me, this is the end result. That doesn’t mean I wouldn’t be happy to get a TV show or be in a movie or something like that. But If I never do nothing else, I feel totally complete.

NT: Why does stand-up complete you so?

BR: It’s a blast. It’s fun making people laugh. I never take it for granted. Every night when I am backstage and hear the murmur of the crowd, I say, ‘Wow, I am pretty fortunate.’ People are here to listen to my quirky thoughts, and I love it. I go out there, get a few laughs, and get enough money to buy a bologna sandwich.

NT: OK. But if you were to have a TV show, what would be the premise?

BR: It would be loosely based on how I think as a stand-up comedian. My jokes are little pieces, act outs, where I act out a situation. It’s usually me and another character or an inanimate object. Me and a fridge salesman or me and an ironing board or a microwave. I think I may be getting too detailed for you?

NT: Yes, now I can steal your act.

BR: Now that you know the formula, you could be performing at the venue across the street from me!

NT: Speaking of venues, Vina Robles Amphitheater is pretty beautiful. Have you been in SLO County much? Remember it’s ‘San Luis Obispo,’ not ‘San Louie Obispo.’

BR: I’m glad you said it. Last time I was there I messed up the name! I’ve been a few times, but never to Vina Robles. I like outdoor venues. Some comedians don’t, but I think it’s different. Except I did one show, about a month ago, and the venue happened to be near train tracks and a street. Maybe four or five trains went by in the middle of a show. It was unbelievable.

NT: Did you put it into your act?

NT: So many comedians say nice stuff about you. People seem to like you, Brian.

NT: I can see the headline now. ‘Creative pig takes over Vina Robles!’ Seriously though, who are some comedians that inspire you?

BR: I’m a big fan of Jerry Seinfeld. Always have been. I was a big fan of his before he even had his TV show, before he became big in the comedy world, then the entire world. He still thinks of himself as a stand-up comedian. I watched him do a show a year ago and I like the fact that he still loves the craft and art of stand-up. He does it ’cause he loves it. I love Maria Bamford and her quirky characters; she’s so unique. Bill Burr makes me laugh with his agitation as he tries to figure the world out.

NT: You seem so good-natured in your stand-up. Even when you seem angry, you don’t seem that pissed off. Are you really “you” on stage?

BR: I want the person on stage to be me, especially the part between the jokes. There are anger fantasies and feeling stupid fantasies, which I exaggerate. But I want the people in the audience to know who the guy is behind the microphone, and hopefully, that helps people enjoy the show. I want them to relate to me and say, ‘Hey, I know a guy like this,’ or ‘I feel like I am this guy.’

NT: You must be continually creating new material.

BR: I am always trying to throw new things in. Whenever I hit the stage I look at my little hit list on my piece of paper and I am always working toward new stuff. I don’t want to be a one-trick pony. I don’t want to figure myself out or figure the comedy out that completely.

NT: How has your comedy and audience changed as you’ve aged?

BR: Earlier in my career, I did stuff about childhood and feeling stupid in school and little league. Then, I did stuff on kids when my kids were young. Now, my comedy is about my hip hurting. Next, I’ll do funny thoughts from my deathbed.

NT: What’s the reaction you look for from a good crowd?