Jenny Mulks Wieneke was supposed to die nine years ago. In 2006, after 10 months of pain, countless doctors visits, and misdiagnosis, Wieneke was properly diagnosed with cholangiocarcinoma, a very aggressive and deadly form of liver cancer. Nine years later, she’s hoping to make you laugh about it. In fact, she wants a lot of people laughing. Wieneke’s nonprofit organization Along Comes Hope is partnering with comedian Andrew Kennedy for a night of pizza, beer, inspiration, and, of course, laughs. 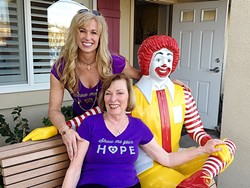 On March 10 at 6:30 p.m., Along Comes Hope will host a benefit show at the San Luis Obispo Country Club to raise money to support the programs the organization offers. Andrew Kennedy, whose Comedy Central stand-up special is rated one of the network’s top 20 and has also appeared on TBS and BET, will be providing the laughs for the event. Kennedy shares Wieneke’s passion for helping children with cancer and was exhilarated at the opportunity to host the event.

“Helping kids in their fight with cancer, who can’t get on board with that?” Kennedy said. “I have three kids of my own and can’t imagine the emotional toll, never mind the huge financial burden. In a world where we hear about charitable organizations with huge operational costs, where most of the money ends up somewhere other than where the donor had intended—this one is the real deal.” It was Wieneke’s own cancer journey that planted the seeds that would become Along Comes Hope. After her diagnosis, Wieneke realized that the massive tumor in her liver was not treatable on the Central Coast and began traveling back and forth between her home in San Luis Obispo and M.D. Anderson Cancer Center in Houston, Texas.

During her treatment, one of Wieneke’s rooms was directly across from two children’s wings of the hospital, and she began thinking about the families that might not be able to be with their children during such a difficult time.

“We had two screamingly large towers that were outside my window. Here I am, a 38-year-old woman and I’m scared to death,” Wieneke said. “There’s children in there that are likely alone—that just made my heart ache for these families.”

Wieneke had access to amazing health care benefits, an income that allowed her to travel, and what she describes as “a village of people” supporting her. She was also very aware that everyone isn’t as fortunate as she was, and there are likely many families on the Central Coast with children in need of specialty care who can’t afford the travel costs associated with treatment.

“I had all these things that allowed me to fight for my life and choose survivability over affordability,” Wieneke said. “I felt like the playing field needed to be equalized and that needs to be everyone’s option.”

In 2013, Wieneke decided to leave her job and focus all of her energy and resources on starting Along Comes Hope. The nonprofit began with a mission of providing travel funds so that families can afford to send their children to specialty facilities and then expanded quickly into several emotional support programs for children with cancer and their families. Wieneke also coordinates with other nonprofits to provide awareness and education programs.

“It’s important for these kids and families to know that they are not alone during this crisis,” Wieneke said. “The losses are heart-wrenching and the healings are huge soul-ebrations!

Every year the Northern California Boys Gymnastics Association (NCBGA) holds the Boys State Gymnastics Championship Competition. This year, Performance Athletics Gymnastics will be hosting the event and with it approximately 350 level four and five athletes. The athletes will range in age from 6 to 15 years old and will come from all over the state to compete. For more information, visit performanceathleticsslo.com/meets or call 547-1496.