What is stress in the modern world? Technically, it’s the struggle between your primal self (the part of your brain that still thinks you might get eaten by a wild animal or murdered by a rival tribe) and the ever-changing external circumstances that can and will trigger that fear.

“Reply all” on a snarky work email when you meant to simply “reply?” Receive a very, very bad AirBnB review? If left unchecked, your heart may race out of control, sending the same powerful fight or flight hormones straight to your brain. Some scientists say we’re dealing with more stimuli—and, as a result, more stress—than any other people at any other time on Earth. 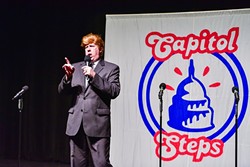 Add atop this modern evolutionary conundrum the 2016 presidential race. In a few words, this election should come with a trigger warning. It doesn’t matter your gender, socio-economic status, or party preference. Turn on the 5 o’clock news or log on to Facebook and you’ll be triggered by waves of overwhelming, blood-pressure-raising, heart-burn-inducing stress.

Elaina Newport understands that her role in the 2016 election process is simple: Make people laugh so they won’t cry, scream, or roll into the fetal position indefinitely.

Her merry band of political satirists recently brought a bit of laughter therapy to the Cal Poly Christopher Cohan Center this past Oct. 24, egging on Hilary, Trump, Obama, and the rest. No one (and no issue) was safe. Her show, Capitol Steps, knows the power that a little song, dance, and equal opportunity roasting can bring. We could all learn a thing or two from these quick-witted heroes of the stage.

“It’s a great time to be in political satire,” Newport said during a recent phone interview with New Times. “However, there have been days where I have found it’s been harder to be more ‘out there’ than the candidates already are.”

Case in point: Remember when Trump ordered, “Get the baby out of here” during a rally? Yes, in hindsight, this was one of his mildest flubs.

“Before that had happened, I wrote a joke for Trump to deliver and I had him go and say, ‘I never kiss babies on the campaign trail; babies are losers,” Newport added. “But then, Trump actually did get into it with a baby. It is a very odd way to make a living, especially at a time like this.”

I asked Newport how she does it, and can we really laugh as our political process truly escalates into morbid political “entertainment”? I mean, if the race has already become a form of dark entertainment, how do you effectively mock it with even more showmanship? Where do we draw the line?

To the first question—how the writer wriggles her way into political candidates’ minds—Newport said it’s easy enough. She consumes a lot of news.

To the second question, Newport understands my hesitation to laugh. She commiserates.

Yes, we may be living in a dystopian future where reality TV has melded into some sort of sick Orwellian prophecy. But still—and Newport will be the first to say it—you can’t keep it bottled up forever. Democrats, Republications, and everyone else need a way to release the stress.

Anyone who’s watched the recent Saturday Night Live parodies of the presidential debates knows that it feels good to smile again.

“Since this is a contentious year, I think it’s important to laugh,” Newport said. “We absolutely need to.”

Hayley Thomas Cain is covering for Ryah Cooley this week. She is most definitely voting and thinks you should too. She can be reached at hthomas@newtimesslo.com.