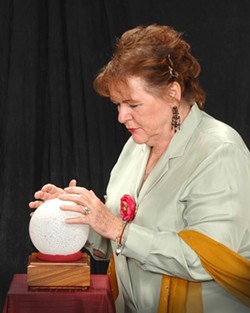 Santa Maria Civic Theatre opens its new season with not one, but two plays: The White Liars and The Black Comedy, a pair of one-acts by the Tony-winning Sir Peter Shaffer (Equus and Amadeus).

While very different in tone, both plays deal with the deception and hypocrisy inherent in classism. Shaffer gives us drama in the first act and comedy in the second, a structure also used by such plays as Shakespeare’s A Winter’s Tale and Brecht’s The (Caucasian) Chalk Circle.

The White Liars is a bit slow-moving and monologuey, opening with Sophie Lemberg (Nancy Kunishige) having a lengthy one-sided conversation with a photograph of her dead father. She’s a fortune teller who claims to be a former Baroness of the Holy Roman Empire. Her shop is at a dreary seaside resort on the coast of England (she comments that the brown sea looks more like tea). Kunishige creates an intriguing character, full of Old World charm and aristocratic bearing.

A pair of customers appears at her seagull-dropping-splattered window, and we can feel her desperation when she cries, “Oh please, let them come in!”

The patrons are a young rock musician, Tom (Josh Cornell), representing both the “working class” and the revolutionary younger generation, and his middle-class manager, Frank (Iain Freckleton). When Frank insists on going first, you know he’s plotting something—and all is not as it appears with these two men. Despite her own proud declaration, “Limberg never lies!” we wonder about the fortune teller as well. Over the course of their readings, more and more truth is revealed, and the play comes together to deliver an effective dramatic punch at the end.

The pacing is slightly off in the first act, but it’s spot on in the second. The Black Comedy is a farce based on a clever and unique premise. It opens in darkness, but we can hear the characters having a conversation as if everything is normal. Brindsley and his fiancée Carol are preparing for the most important evening of their lives. Not only is an eccentric millionaire coming to look at Brindsley’s artwork, but Carol’s father is also coming to decide whether or not to approve of their marriage. In order to make themselves look good, they’ve “borrowed” (temporarily stolen) the chic furniture of a neighbor who’s away on vacation. Suddenly, the stage lights come on, and the pair begins stumbling around and talking about a fuse being blown. This reversal of lighting logic allows us to see what the characters do in the “dark”—and what they don’t want each other to see. The effect is even more convincing when someone lights a match and the stage lights dim halfway. (This is perfectly timed by lighting designer Jeremy Fryckman.)

We see that Lemberg’s shabby little shop has vanished between acts and has been replaced with Brindsley’s groovy little apartment. Artwork is everywhere, including a large Jackson Pollack-style “drip” painting and Brindsley’s abstract metallic sculpture. (Set design is by Valerie Pallai, who also directs.)

Each cast member makes wonderful use of his or her character’s comedic gimmick, and they all play off each other very well (suggesting strong direction by Pallai). Cornell and Freckleton also appear in this act, showing their versatility, as their roles here are complete 180s from their roles in White Liars.

Playing Brindsley, Josh Cornell is great with physical humor, as he previously showed in the SMCT production Bedroom Farce. Here, he scrambles around the “darkened” apartment, stumbling, tripping, falling, desperately trying to keep the truth from being revealed.

Carol is played by Cornell’s real-life wife, Katie, who gives her character a delightfully squealing voice and uppercrust accent, and regularly gets laughs out of the character’s tendency to add the suffix “poo” to various words (“Daddy-poo,” “stinky-poo,” etc.)

At one point, a neighbor wanders in—Miss Furnival, an elderly spinster “minister’s daughter.” She gets an accidental taste of alcohol and goes from “ewww!” to “oooh!” in a matter of seconds (a moment handled brilliantly by Kelly Greenup).

Iain Freckleton plays Carol’s father as a blustering, bellowing military type—a dramatic-tension-creating role similar to the one he played in SMCT’s production of The Underpants. He’s an expert.

Alan Foster dons bright orange as Harold Gorringe, the flamboyant neighbor whose furniture was stolen and who takes relish in the love of the finer things and laments the demise of “refinement.”

Cherish Fry is seductive in the role of Clea, a woman from Brindsley’s past who shows up to further complicate matters.

Jim Dahmen appears as a repairman who likes to spout philosophy, much to the class-distinction-confusion of the others. And a “mystery guest,” who will be known to SMCT fans, plays the millionaire, Mr. Bamburger.

The piece is even a bit poignant, showing how the darkness ironically illuminated these characters’ secrets.

Freelancer Brent Parker can see in the dark. Contact him via aschwellenbach@newtimesslo.com.