Want your next drive through San Luis Obispo to feel less like a scene out of Mad Max? A local personal injury law firm's list of the city's 25 most dangerous intersections just might help you avoid another fender-bender or worse.

The list, which ranked the city intersections by the number of accidents recorded by law enforcement, was compiled by the Law Office of Daniel J. O'Neill. According to the firm's website, the list was created to relieve some of the anxiety that comes with driving in SLO, and to provide drivers with insight into which intersections they should be more cautious about using. The list on the website ends with a message touting the firm's experience in getting clients settlements and encouraging potential clients to contact them for a free consultation. 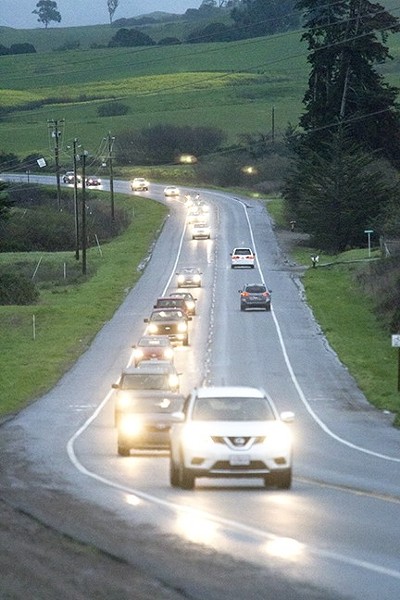 "At this intersection, the most common type of collision was rear end," the firm's website stated. "The second most common was broadside [accidents](where the side of one vehicle is impacted by the rear or front of another vehicle, forming a 'T')."

According to the law firm's research, 39 people were injured as a result of those accidents, and seven involved either a pedestrian or someone riding a bike.

Several streets make multiple appearances on the list, including Santa Rosa and Los Osos Valley Road, which included in six of the different dangerous intersections listed. Other streets that appear frequently on the list include Madonna Road, Foothill Boulevard, and Broad Street.

"Luckily, there have been only four fatalities that occurred in San Luis Obispo in the past five years, according to the data," the website stated. "Surprisingly, all of these fatal accidents occurred on Northbound 101 on/off ramps. There was one fatality at each of the 101 N on/off ramps at California, Higuera, Madonna, and Osos."

Five days after the firm released its list, SLO police reported another fatality at one of the city's intersections. Police said that 22-year-old SLO resident Kennedy Love was and killed by a vehicle Aug. 29 while riding his bicycle near the intersection of Foothill Boulevard and Ferrini Road. A 17-year-old female, who police believe may have been driving drunk, was arrested in connection with Love's death.

According to the data compiled by O'Neill's firm, the top 10 most dangerous intersections in SLO are: