A coalition of local residents and activists filed a lawsuit on Jan. 12 challenging the San Luis Obispo County Board of Supervisors' adoption of a redistricting map last month that dramatically redrew its five supervisorial districts.

Calling the new map an attempt to "entrench Republican control of the Board of Supervisors" for the next decade, the lawsuit filed by SLO County Citizens for Good Government alleges "sophisticated and systemic partisan gerrymandering." 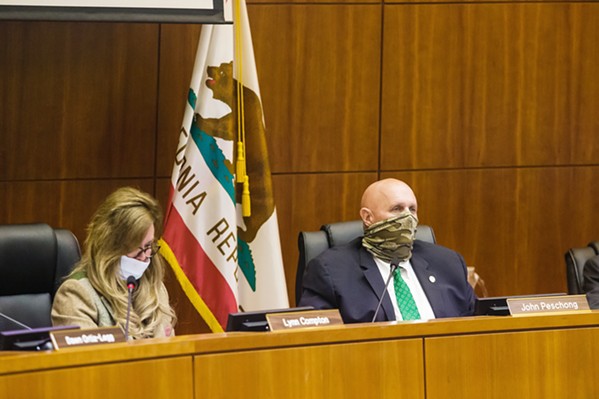 "The new supervisorial district boundaries approved by the Republican board majority are drawn in a manner that supports, indeed compels, a single reasonable and inescapable conclusion: that the boundaries were drawn for the prohibited purpose of favoring one political party and/or discriminating against another," the lawsuit states.

The suit argues that the reconfigured districts—drawn by a registered Republican, Richard Patten, endorsed by the local Republican Party, and voted in by three Republican supervisors—gives the party an advantage in three of the five districts, despite the fact that Democrats outnumber Republicans in SLO County by 6,000 to 7,000 voters.

"The record demonstrates that the board adopted the Richard Patten Map for prohibited partisan purposes in conflict with the requirements of California law," the lawsuit says. "Petitioners request that the court ... set aside the board's adoption of that map in advance of the supervisorial election currently scheduled for June 2022."

The lawsuit comes less than a month after county supervisors finalized their controversial redistricting decision on a 3-2 vote. Since Dec. 22, Citizens for Good Government has raised more than $260,000 from nearly 1,500 donors for the legal effort, according to spokesperson Quinn Brady. The group expects the ultimate costs of the suit to exceed $400,000.

"We do have great local lawyers collaborating with us pro bono and we're a fully volunteer team, so we're able to cut costs in a lot of ways, but bringing in a firm like Shute, [Mihaly & Weinberger] really gives us the best chance at success," Brady told New Times. "I think we are going to continue ask the community for support, and every time we do, support comes pouring in, which I think is a real testament to how much people care and how outrageous the board's decision was."

Brady said that the coalition is now keenly focused on expediting its redistricting challenge through the court system, since two county supervisor elections for Districts 2 and 4, represented by Bruce Gibson and Lynn Compton, respectively, are slated for June 2022.

"We're aware of the timeline and we recognize the primary dates we're working backwards from," Brady said. "Our understanding is that courts across the United States are trying to work to expedite these types of filings because they recognize how important elections are. So, we hope we'll see the same thing from the courts here."

Brady did not elaborate on why the group decided to file the challenge in the Paso Robles branch of the court, only saying that the county as a whole is affected by the outcome, "so whatever court we file in, it would be the correct court."

In a response to New Times' request for comment, the SLO County Counsel's Office confirmed that "it will be defending the Board of Supervisors' legislative decision through the court process." Δ