A dispute over who really owns the Hillside Church in Grover Beach has spilled into court.

The Christian and Missionary Alliance (CMA), a national Protestant denomination with 2,000 churches, filed a lawsuit against local resident John Fleming, alleging that Fleming wrongfully claimed ownership of the church earlier in May in order to stop its pending sale to two local nonprofits. 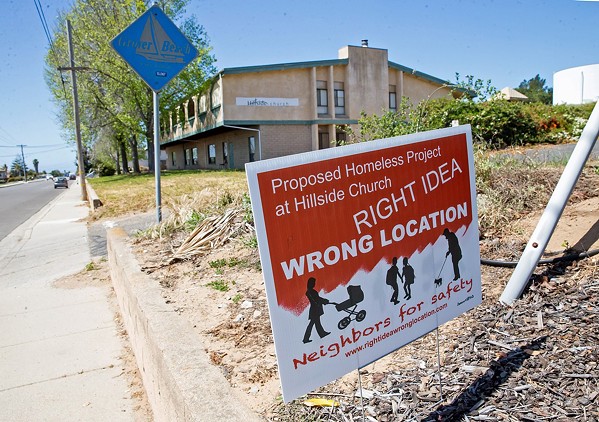 With $2.7 million in financial backing from San Luis Obispo County, 5Cities Homeless Coalition and Peoples' Self-Help Housing are in escrow to buy the Hillside Church from CMA, with plans to develop the property into a homeless services facility.

The parties entered escrow in January of this year, with a sale price of $2.25 million and a close of escrow date of July 16.

On May 6, Fleming, who says he's attended Hillside Church since 2014 and is a board member, filed paperwork at the County Clerk's Office granting the property to himself and the Bethel Baptist Church—its original affiliation dating to 1962.

"It's our intention to keep Bethel Baptist open as a place to worship," Fleming told New Times on May 21.

CMA's May 17 lawsuit alleges that Fleming illegally transferred the property and misrepresented himself as the president of Hillside Church, "despite never being a pastor, officer, director, agent, or employee" there.

The suit also says Fleming has since liquidated the church's bank account of about $8,000, changed the locks on the church, and has "threatened and/or implied the property will be damaged" if Bethel Baptist doesn't retain ownership of the church.

"Defendants had no authority, legal interest, equitable interest, or otherwise power to control the [property]," the complaint reads.

Fleming, though, told New Times that he is "both a member and a board member" of the church and that a former pastor, Ron Kennedy, put Fleming on its signature card at the bank.

CMA attorney Michael Pick declined to comment on the specific allegations made in the lawsuit—among which are wrongful possession of property, slander of title, trespassing, intentional interference with contract, and conversion.

"The purpose of the lawsuit is to protect [my client's] property rights and to ensure it can fulfill its contractual obligations," Pick told New Times via email.

The ownership dispute has thrown the property's sale and its future plans for homeless services and low-income housing into uncertainty.

CMA's title company, Fidelity National Title, has told the parties that it can't close escrow due to a cloud on the title. According to the lawsuit, that declaration came not in response to Fleming, but to a letter from SLO attorney John Belsher. The suit states that Belsher wrote the letter on behalf of "parties very concerned" about the sale to say that CMA did not have the right to sell the property.

CMA's involvement at Hillside Church developed slowly over time. In 2012, Bethel Baptist Church changed its name to Hillside Church. In 2014, amid declining membership, finances, and attendance, church membership voted to "remove its affiliation with the Baptist Church," in favor of the CMA, according to the lawsuit.

Later in 2014, CMA labeled Hillside as a "developing church." Per the lawsuit, that meant CMA had the "responsibility of governing the church," its assets, and liabilities. In 2016, Hillside Church underwent another name change, to Hillside Church of the CMA.

Finally, in October 2018, then church pastor and President Kennedy filed papers to transfer the property to Hillside Church of CMA.

"As a result of dwindling finances and attendance, CMA decided to sell the property," the lawsuit reads.