There are two things in life I can never, ever pass up. One is kissing mini donkeys and the other is country dancing with my husband (we honeymooned in Austin for this very reason). So when I caught wind that Lazy Arrow Adventures at Camatta Ranch would be holding a traditional hoedown—complete with exotic animals and line dancing—I was more than game. 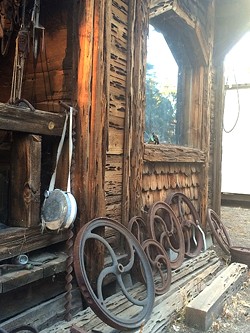 On Saturday, Aug. 22, Reid Cain and I slipped on our boots and country finery—he donned a cowboy hat and snap-down shirt, me in gingham and braids. We loaded up with a cheeseburger and tri-tip sandwich from Sylvester’s Burgers in Atascadero and set off for an evening of Western fun (for the sake of this story, imagine we traveled in Hank Williams’ 1952 baby blue Cadillac, not a Kia Soul). Of course, we played only George Straight throughout the duration of the drive.

Lazy Arrow Ranch is not “conveniently located” in any sense of the word. Even Felicia Morrison, who owns the ranch alongside her husband, Mark, admits that it’s “in the middle of nowhere.” The 32,000-acre ranch lies about 24 miles east of Santa Margarita on Highway 58, about 20 minutes east of Creston, and 25 minutes south of Shandon.

Black cows dot the golden hills as we zip through winding back roads searching for a sign of civilization. After about an hour (we got a tad lost) there it is: a little wooden sign for the ranch. If we had blinked we would have missed it.

Dust dances in the air as we roll onto the ranch, already lined with cars and trucks. Our friends Joey Bell and Greg Cherry are here, having a tailgating party all their own with Boston terrier Jack. Greg points out the car parked next to him, which sports a Bernie Sanders sticker. I take it as a good omen: A sign that Democrats and Republicans will be joining together for a night of joyous boot scooting.

The first thing I notice about Lazy Arrow ranch? Well, it looks exactly like an old Western camp, with antique farm equipment and rusty accoutrements everywhere. You’ve got your wagon wheels and your oilcans and your horseshoes—the whole nine yards. The first animal I encounter happens to be a turkey, which gobbles wildly as I peer into its ample pen, nestled behind a wooden shack that looks about as old as the ranch itself (which actually dates back to the 1880s).

I soon find out that the ranch is home to more 250 exotic animals, all enclosed in vast pastures surrounding the “town” square. Beyond that, more than 200 cattle roam the hills—less than normal due to the drought. The Morrison family offer four rustic guesthouses, camping, weddings, and a slew of events on the land, all of which help bring in a little extra cash.

I soon catch the eye of several deer and a herd of goats (some familiar, some unlike any breed I’ve ever seen). With horns and hooves and quivering noses, they press up against the fence in search of goodies. Reid and I grab hunks of hay and feed the critters a good snack. 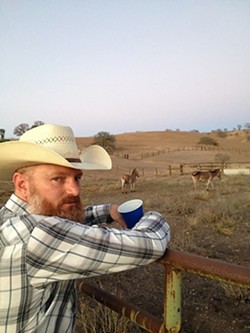 According to Felicia, her husband began collecting exotic animals before he could legally drink. He also works to adopt animals in need of a home, like his two prized zebra-donkeys (more on them later).

“That’s how the ranch got the nickname, ‘Mark’s Arc,’” Felicia says. “He collected all the animals in twos.”

Suddenly, I hear someone yelling my name. There’s New Times Staff Writer Kylie Mendonca, wearing a full, checkered skirt and cowboy boots. She’s sailing through the air on an old swing set. Nearby, New Times Editor Camilia Lanham is doing the same. After a few pumps on the swing myself (turns out my dress is too short for that), we all pile onto an ancient merry-go-round and spin till we’re all about to barf. Let me also mention this is a family friendly affair—there are real young people and kids hanging out too, not just eccentric writers who still think they’re 12.

We hear Felicia’s 21-year-old son, Haustin, over the PA system letting us know it’s time to dance. A crowd assembles in the antique-looking stage enclosed by hay bails. We’re ready to kick up dust.

Haustin is the whole package: an incredible dancer and a firefighter for the Templeton Fire Department. It’s a wonder he was able even attend the shindig. As I later find out, he had been busy battling the Cuesta blaze all weekend!

Line dancing is hard. I absorb about six of the dance moves, but give up when Haustin goes on to a second routine. One is more than enough for a newbie like me! I join back in for the dance circle—guys on the inside, girls on the outside. As Alan Jackson sings “Good Time,” the girls rotate from guy to guy, knocking boots (literally, not figuratively). It’s all fun and games until—wham—my colleague Mendonca slams me in the eye with a wayward elbow. It smarts something vicious, but we all laugh. I now have a wee black spot in the inner-corner of my right eye—a hard-won souvenir from my first-ever line dancing experience. Lanham is a pretty good swing dancer in her own right, and she leads me around the floor like a pro. 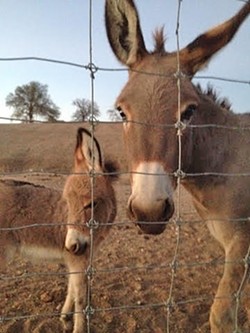 Thankfully, Haustin takes a break from Top 40 pop country to play a few songs “for the old folks.” Most of the kids here are in high school, and I don’t blame them for wanting to hear young and sexy Jason Aldean over old crooners like Conway Twitty. Still, Reid and I take full advantage of the handful of classic songs played, twirling under the twinkle lights, bright moon, and shining stars.

But I am still on a mission. I still need to see this zebra-donkey I had heard so much about. So, Reid and I take a break from two-stepping to find this mystical creature. A cross between a zebra and a donkey, the extremely rare (and hard to breed) animals are sometimes called zebonkey, zebronkey, zebrass, but Felicia just calls ’em zeedonkeys.

On our trek to the pasture, we pass an old barn, where peacocks are roosting in the rafters for the night. All around our feet, little cats mew. Finally, we see something beyond the fence. Could it be? It’s not a zonkey—it might be better! We are blessed with a ridiculously cute miniature donkey and her baby. I coo and fuss over the animals (I get my smooch), then we’re stunned by what might be a Nubian Ibex goat. A pair of black swans glide along a man-made lake.

As the sun sets, a flock of noisy Canada geese honk overhead. I’ve all but forgotten about our original mission, entranced by the fantastical wildlife all around. Until—there, up ahead—I catch a glimpse that is familiar, yet otherworldly. With brown fur, wide eyes, and striped legs, the skittish zeedonkyes are a sight to behold, even if they aren’t as personable as the goats. According to Felicia, she and her husband adopted the pair from an ailing Southern California man who—against all odds—created them. For the past 10 years, they’ve lived on the ranch, in the middle of nowhere, with plenty of space to run free.

Now, I have seen it all. Well, not exactly. Word on the street, there is a water buffalo also hanging out somewhere at Lazy Arrow, and there’s an heirloom garden brimming with edible delights. But I will have to save those sightings for another adventure. In life, you can never stop searching. How else was the West won?