LeAnn Rimes plays a Rotary Club fundraiser on Feb. 13 at the PAC-SLO

About 20 years ago, a 13-year-old girl from Texas instantly became the most famous country singer in America when her first single “Blue” debuted at No. 3 on the pop charts. With powerful vocals reminiscent of Patsy Cline and a mythical backstory about the origins of the song, LeAnn Rimes was whom everyone was talking about. 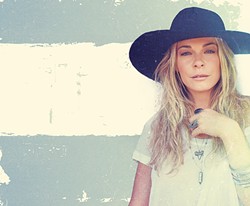 “Blue” was written by Dallas disc jockey Bill Mack, who claimed he’d written the song in the ’60s for Cline who had died before she had a chance to record it. He claimed he’d been waiting 30 years for the right vocalist to come along. Of course, the story was mostly half-truths (it had been recorded at least three times before Rimes), but it didn’t matter. LeAnn Rimes had arrived. She was Tanya Tucker all over again.

Now Rimes has become a cottage industry, with 42 charting singles (13 on the top 10). She’s starred in TV movies and TV series, and in the feature film Good Intentions. She’s written two kids books, a novel, and an inspirational book. She won two Grammy Awards, sold more than 44 million albums, and this Saturday, Feb. 13, she’ll perform a benefit concert for the Rotary Club of San Luis Obispo de Tolosa at the Performing Arts Center (8 p.m.; all ages; $50 to $90 at 756-4849 or pacslo.org).

“The proceeds will benefit local nonprofit organizations that benefit the youth of the San Luis Obispo community,” according to the Rotary Club. “To date, Rotary de Tolosa has given more than a quarter of a million dollars from their annual fundraiser to support local charities.”

Plus you’ll get to hear great songs like “Can’t Fight the Moonlight,” “The Light in the Your Eyes,” and “Nothin’ New Under the Moon.” 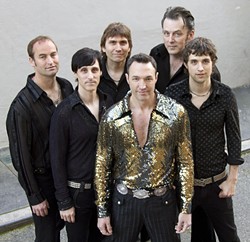 If you were trapped on a desert island with only one singer’s music to listen to, you could do a lot worse than Neil Diamond. The dude’s responsible for 11 No. 1 singles, everything from “Cracklin’ Rosie” to “Forever in Blue Jeans” to “Sweet Caroline.” Good times never seemed so good, am I right?

Before you get too excited, Neil Diamond is not coming to the Fremont Theater this Saturday, Feb. 13, but Numbskull & Good Medicine Presents has the next best thing, Super Diamond, a Neil Diamond tribute show (7 p.m.; all ages; $22 to $30; ticketfly.com).

Hey, they even have Neil’s approval. On Nov. 9, 2005, Diamond told Katie Couric on the Today Show, “I’ve met them and I have been to their shows; they’re wonderful!”

The San Francisco-based tribute act has appeared all over the country. Fronted by Randy “The Surreal Neil” Cordeiro, a sequin-shirt-clad mimic, he channels Diamond’s tone and vocal inflections to a T. Neil Diamond himself has actually joined the band to perform live twice.

The following night at the Fremont Theater, Numbskull and Good Medicine bring The California Honeydrops on Sunday, Feb. 14 (7 p.m.; all ages; $22.50 to $25; ticketfly.com). This is a great, upbeat act that mixes R&B, funk, Southern soul, Delta blues, and New Orleans second-line sounds into their own party music mélange.

The evening starts with opening act The Dustbowl Revival, which recently toured China as part of a U.S. Embassy and Chinese Cultural Department Exchange program. The Venice, Calif.-based jazz, blues, and roots act will be the perfect compliment to the Honeydrops.

I’m listening to Holly Ann Lewis and her new CD Miles Around, and on the title track, if her voice had a few more miles on it and a lot more pain in it, the song would sound a lot like Lucinda Williams wrote and sang it. It’s literate, imaginative, and emotionally resonant.

With 25 years of performing experience and this third album under her belt, she’s what’s often called an inveterate performer. She spent 16 years in Seattle before returning to her native California four years ago, and this new album was recorded locally by Ted Waterhouse.

One of my favorite songs on the album is “Close Call Near Miss,” which has a hooky, percussive chorus that’s immediately accessible. It’s the kind of song you can’t help bopping along to: “It was a close call, near miss, some people don’t walk away from this.” In it, you can hear why listeners sometimes compare Lewis to Ani DiFranco, not to mention Jewel, Melissa Etheridge, and Tracy Chapman.

She’ll play a CD release party under the auspices of Songwriters at Play on Friday, Feb. 12, at D’Anbino Cellars (7 p.m.; 21-and-older; $12; call 227-6800, Ext. 700 for reservations). Album producer Ted Waterhouse and many of the musicians who provided backing tracks will join in. The Harmony People will open the show, and Shane Alexander will also be featured. 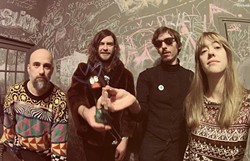 German garage/psych/pop act The Roaring 420s play Sweet Springs Saloon this Friday, Feb. 12 (8 p.m.; 21-and-older; $5). “Hailing from Germany, The Roaring 420s are playing a wild mélange of psychedelia and surf music with nods to Krautrock, folk, and Eastern music,” drummer Luisa “Lulu” Mühl wrote in an email. “We’re a notorious live band and have extensively toured through Europe in the past two years, sharing the stage with bands like the Blank Tapes, Strange Boys, or White Fence.” This is their first time touring America. Pancho & The Wizards, Off Center And The Holes, and The Vacant Shapes share the bill.

The closest thing to David Lindley who isn’t David Lindley is probably Joe Craven, a multi-instrumentalist and madcap musical madman who’s perhaps best known locally as the long running emcee of the Live Oak Music Festival (by the way, early bird tickets are on sale now at liveoakfest.org). This weekend, his trio Joe Craven and the Sometimers play two SLOfolks shows starting Friday, Feb. 12, at Coalesce Bookstore (7 p.m.; all ages; $20 at 772-2880); and Saturday, Feb. 13, at Castoro Cellars (7:30 p.m.; all ages; $20 at 238-0725). Craven’s an amazing performer, educator, and wearer of odd clothing, and nobody does onstage banter better. In addition to the concerts, Craven will offer a workshop on Saturday, Feb. 13 (12:30 p.m.; all ages; $40 tickets at playjoecraven@gmail.com).

Beppe Gambetta will perform a benefit concert for the Templeton Schools Music & Arts Programs this Saturday, Feb. 13 (6:30 p.m.; all ages; $20, available at Matt’s Music, Stage & School or 237-0054), in the Templeton Performing Arts Center. “From his unique background as an Italian musician in love with both American roots music as well as the music of his native country, Beppe has travelled the world and even crossed the ‘Iron Curtain’ to dazzle and charm music enthusiasts everywhere,” according to press materials. The acoustic guitarist has 11 CDs to his credit. Templeton High School junior Joseph Seyedan will open the show.

Folk singer Lukas Papenfusscline (banjo, guitar, harmonium) plays Last Stage West this Saturday, Feb. 13 (8 p.m.; all ages; free). “His hauntingly beautiful recomposed folk music draws from the Lomax recordings and the Appalachian folk tradition, but also brings a new and original sound to these timeless tunes,” according to his bio. He’s got a wonderfully expressive voice that indeed sounds like it’s straight out of hill country. 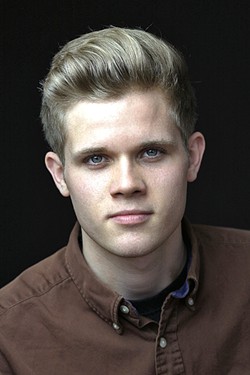 Hear the music of Brahms and Cole Porter when soprano Katherine Arthur and pianist Louise King offer a recital this Sunday, Feb. 14, at Los Osos’ St. Benedict’s Episcopal Church (3 p.m.; all ages; free but donations welcome). It’s a concert they’re calling “For the Love of Music.”

Jazz Vespers returns to First Presbyterian of San Luis Obispo this Sunday, Feb. 14, at 4 p.m. in a special Valentine’s Day edition. “Jazz Vespers combine music with a time of reflection, prayer, and inspiration,” according to organizers. Vocalist Judy Philbin, accompanied by Adam Levine on guitar and Keegan Harshman on bass, will “perform songs focused on love, songs that speak of gratitude, love of life and family, and love for humanity.” The show is free but donations are appreciated. Happy Valentine’s Day!