Slow Money SLO, will host a free community gathering this Nov. 14 at the SLO Guild Hall at 2880 Broad St. from 6 to 8 p.m. The group would like to hear from local food supporters, potential lenders, food and farm entrepreneurs as well as donors to support the cause. For information, email jeff@slowmoneyslo.org or go to slowmoneyslo.org.

When you talk about "the little guy," you're talking about Michael Huggins. Just remember: His business is small, but his story—and his dreams—are not.

An engineer-turned-organic-farmer, Huggins traveled all over the place—Kentucky, Oregon, Oakland, Finland—before settling in SLO. He's studied physics and water resource engineering and what makes the world tick. 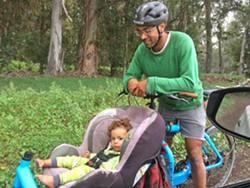 Now, he tends an acre at City Farm SLO, where he also keeps his favorite science project humming: A 120-by-35-foot greenhouse that he built then packed with certified organic turmeric, ginger, and winter tomato plants.

"Working in the greenhouse is all about controlling the environment; in a way, I'm continuing to use my science education," Huggins said.

That doesn't mean starting his business was a clear-cut experiment.

Before Huggins ordered his organic seed rhizomes (first from Hawaii, then from another vendor, because, as he found, you cannot legally import these particular seeds to California from Hawaii); before he started the baby seeds inside and replanted the larger specimens in the greenhouse he built; before he ever began selling the precious knobs to local purveyors like SLO Natural Foods Co-Op and New Earth Superfoods some six months later; he had a big problem to fix.

Really, he was in deep doo-doo. Actually, he kind of wished that he was. Literally.

"I needed organic fertilizer," Huggins said of the roadblock. "Turmeric and ginger don't like heavy, clay soil, which is what we have on the farm. I had raised and amended the soil, but it just wasn't working."

What's more, organic fertilizer ain't cheap, and you need a lot of it if you want to keep a continuous greenhouse operation going. Huggins' partner, Cal Poly professor Jenny Huggins-Denbow, and a baby daughter, Cedar, were depending on Huggins to make his seeds grow.

In reality, the whole dream—which Huggins had dubbed "Dacite Farm," after the iconic rock formations that make up the Seven Sisters—could have died right then and there.

This is where Slow Money SLO comes in, like some sort of small food business superhero. 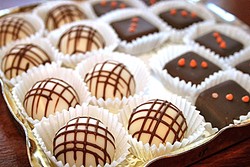 None of this would have been possible—not the greenhouse or the solar power Huggins uses to charge his tools, or the pricey organic fertilizer—if it hadn't been for the 501c3 nonprofit.

"Two years ago, they made all this possible," Huggins said. "They pulled some people together who might be interested in supporting what I was doing. I did a presentation and received a loan from a few different people. These were all local people."

"A goal of ours is to help small food and farm businesses who cannot qualify for traditional lending. We want to help them become eligible and to create jobs, as well as a quality income, for entrepreneurs and farmers," said Slow Money SLO founder and Executive Director Jeff Wade. "We want to rejuvenate soil, protect farms and food, as well as support local value-added food businesses."

The group—which offers guidance, support, and (as you already know) a path to funding—is a trustee for online peer-to-peer lending nonprofit Kiva, which allows everyday lenders to give to small startups in need.

"After approval of a loan application online by Kiva, we collaborate with these food business to fund the first group of lenders who can loan as little as $25. There is no interest payback and no loan fees to borrower," Wade said.

After the initial local lenders are found, Kiva opens the opportunity to global crowdfunding which—as you might imagine—can blow minds and change worlds. Getting a loan can mean a huge deal for "a little guy or gal" working on big dreams. 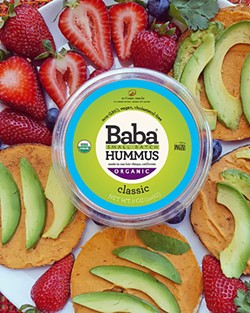 Take Baba Small Batch Hummus, for instance. If you live around SLO County, you've probably dipped a pita chip or two into this delicious organic product.

Without Slow Money SLO, it may have been a different story.

With help from the nonprofit, Baba was able to secure a loan and avoid using a third party co-packer outside of the county.

"Loan repayment on the used packing equipment was much easier for their financial management than the cost of paying for the packing and transportation. Also, retaining control of the production insured consistency of product quality and flavor," Wade said. "They trained staff to use the equipment, which gives them skills and retained staff; these are people they may have had to let go of if they had gone with a third party producer."

The end result? Baba could pursue more stores and expand sales without the fear of not being able to keep up with its already numerous orders.

Other local producers like Whalebird Kombucha and Mama Ganache Chocolates in SLO have their own Slow Money SLO success stories to tell.

You can hear about these stories and nosh on samples from Bliss Cafe, Back Porch Bakery, SLO Natural Foods Co-Op, Whalebird Kombucha, Mint + Craft, Lincoln Deli, Doc Burnstein's, and Niner Estates at a Nov. 14 meeting at the SLO Guild Hall.

Huggins is one of 18 business owners whose dreams have been ignited by local support. Now, he has plans to multiply that single greenhouse into several. His crop list will also expand to include peppers. The latest harvest of ginger and turmeric? That will go to local business Julia's Juices of Arroyo Grande, which—in turn—helps another local business do their thing.

In the end, the local funding goes right back into neighborly hands. Which means it's really not just about money or one person's success. It's about connecting and supporting each other to better feed us all.

"Compared to using a traditional bank or institution, people are much more flexible, and it's a rewarding, less stressful experience," Huggins said. "In the future, I'd like to start my own co-op to give back." Δ

Hayley Thomas Cain is dreaming big with a small footprint. She can be reached at hthomas@newtimesslo.com.