As the pandemic forces thousands of Cuesta College and Cal Poly students to learn and study away from the classroom this school year, the question of what will happen to the extracurricular aspects of college—student-led organizations, clubs, and campus life—looms large.

Cuesta College Faculty Coordinator for Student Life and Leadership Dr. Anthony Gutierrez said that community colleges like Cuesta can take advantage of already having a somewhat spread-out student body. Even before the pandemic, Cuesta was familiar with "the challenge of having students in SLO and other parts of the state," Gutierrez said, "so this gives us an opportunity to connect with possibly more students."

But for a school like Cal Poly, where "learn by doing" is the school's core philosophy and remote classes are a brand new concept, the transition to a virtual landscape may be more acutely felt.

"I think the connotation around 'learn by doing' is that it's hands-on," said recent Cal Poly graduate and entrepreneur Nathan Brickman.

But, he continued, "the reality is there's so much 'doing' that is separate from that."

"The Summer Accelerator is typically held in the HotHouse," said John Townsend, the CIE executive director.

The HotHouse is a space that supports both students and community members to bring their business ventures to life.

"We normally have all eight teams working side by side in a pretty confined space," Townsend said of the summer program. "Obviously we couldn't do that."

The popular CIE summer program quickly adapted by providing a distanced workspace for the student teams and using productivity apps like Zoom and Slack.

"Even though we provided some workspace, we still ran the program entirely virtual, so you can be anywhere at any point in time," Townsend said.

Brickman said there were even some benefits specific to the virtual experience.

"I think we took full advantage of it being virtual, and all the teams did as well," he said. "We had the opportunity to meet with speakers virtually that we otherwise wouldn't have, if it were to be in person." 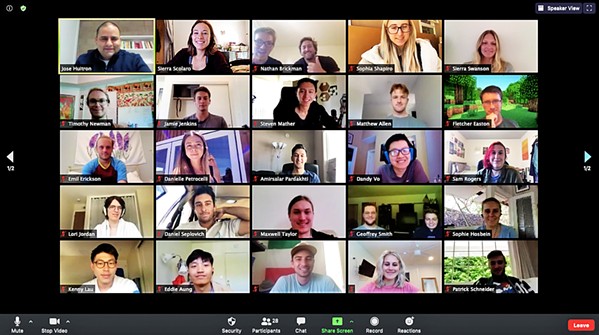 Townsend said that the pandemic actually increased student demand for the already competitive program, which provides $10,000 in seed money to eight teams each year.

For Brickman and his team, the pandemic further underscored the need for the services that their startup, Bridge, seeks to provide. The software essentially creates a space for mental health professionals to consult with and refer clients to one another, as well as promote and grow their practices.

"Demand for [mental health] services is unbelievably high right now, so subsequently, a lot of these mental health professionals are bombarded with calls and emails from people they either can or cannot accept into their practice," he explained. "We started this research well before COVID-19, and we were still solving problems and challenges then—it just so happens that those problems and challenges have been enunciated simply because demand is so much higher."

"They're trying to solve some pretty significant problems," Townsend said. "I think that was another outcome of the pandemic: It just became, to some extent, an intense focus on societal issues that they wanted to be a part of solving."

The CIE will showcase the work of the Summer Accelerator teams at its annual Demo Day, a virtual event to be held on Sept. 18.

"Company representatives, who ordinarily would pitch their respective startups in front of a live audience, will shift their presentations to a YouTube livestream," a CIE press release stated.

Another way the CIE engages entrepreneurially minded Cal Poly students is through the Entrepreneurs Club, which Townsend said is the largest non-athletic club on campus. The university also has an academic entrepreneurship program, which Brickman completed a minor in.

"It's the epitome of being truly interdisciplinary," Townsend said. "Even though there's going to be some physical challenges, I think the fact that we're still, relatively speaking, one of the strongest, collaborative, community-oriented groups to get involved with—I think we're going to do just fine."

Brickman echoed this sentiment, saying that "learn by doing" is about more than getting one's physical hands dirty.

"'Learn by doing' is, to me, about experiencing challenges and being forced to adapt," he said. "Obviously right now we've been tremendously challenged, and our world is a lot different than it was. But at the same time, we're adding the tools on our tool belt to be more successful beyond, and be more adaptive to hardships and adversity as we graduate and move on in our careers and life."

"We want to encourage them to communicate with other students and try to bring them in," he said. "Our students are pretty resilient." Δ