Learn where the Morro Bay mayoral candidates stand on the issues 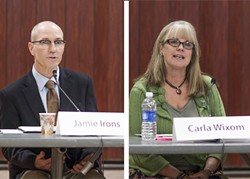 In less than a year and a half, much has changed in the small, fog-soaked town of Morro Bay.

A long-time City Council member and the mayor were ousted and replaced by what many locals perceived as a new guard. The much beleaguered wastewater treatment plant was finally scrapped and sent down a new path more in line with comments from the California Coastal Commission. And the contention surrounding the city’s former attorney and city manager—specifically how they were terminated—culminated in a mayoral recall effort that ultimately failed.

These days, council meetings flutter from perfectly civil to highly unruly in a city where leaders have stormed out of meetings and locked in 3-2 votes, with freshman Mayor Jamie Irons and City Councilwoman Christine Johnson often aligning with each other and veteran Noah Smukler, opposite Nancy Johnson and George Leage.

While the 2014 primary and general elections could result in any number of new political configurations. With Irons defending his seat against former Councilwoman Carla Wixom, and Nancy Johnson squaring against Chamber of Commerce President Elect John Headding and English teacher Matt Makowetski, most eyes will likely be focused on the mayoral race to be decided in June.

Irons is fresh off withstanding a recall effort that failed to garner enough signatures to qualify for a ballot measure. And frustrations still reverberate through the community, where locals have condemned Irons for leading the charge that led to the termination of former city attorney Rob Schultz and former city manager Andrea Lueker following a process that critics said was rushed and lacked transparency. Irons was also at the helm when the California Coastal Commission denied the embattled wastewater treatment plant upgrade, which resulted in scrapping years of work—though critics noted the proposed plan likely never had a chance of wooing coastal commissioners.

Asked about those decisions, and whether he would have done anything differently given the flak he’s received, Irons said he still feels he made the right calls, adding that misperceptions about how Schultz and Lueker were terminated may have fueled some of the outrage.

“I acted in the best interest of the community,” he told New Times. “I feel my actions were not only appropriate, but necessary.”

Unity and transparency were two of the themes at an April 17 debate, sponsored by the League of Women Voters of San Luis Obispo County.

Irons closed his comments for the debate by saying, “I have protected our promise; I have protected the promise, and I have acted in the best interest of our community.”

In her closing statement, mayoral challenger Wixom said, “I feel that we need to keep moving forward to bring Morro Bay back together.”

Speaking to New Times after the debate, Wixom said the divisiveness can be attributed to the decision to fire Schultz and Lueker.

“I believe I have that ability … to work to garner a true consensus and not a roadblock,” she said.

Wixom seemed disappointed by the way the treatment plant project eventually died (“The project wasn’t provided the opportunity to be heard or defended.”) but said “it’s behind us now.”

“And I have every intention in the world of moving forward and not taking a step back,” she said of new efforts to construct a water reclamation facility.

Irons said he believes one of the best ways to reunite the community is to begin work on updating the city’s general plan, which has remained stagnant since 1988. He thinks the plan could bring the community together and allow various opinions to redirect the city’s outdated policies.

“When we talk about bringing people together, let’s talk about our general plan,” he told New Times.

Despite the talk of unification and consensus, the bad blood is still boiling. Some residents told New Times that Irons’ campaign signs have been disappearing, and they think they know why. According to an April 6 Facebook screenshot provided to New Times, resident Kathleen Welles wrote: “Reflecting on past elections Irons and his lil boys try to put signs up there but Billy takes them down on his daily drive in the morning.” She offered to post Wixom’s signs using “a nail gun or better apparatus to make sure the signs STAY where we put them.”

On Sept. 27, 2013, Bill and Kathy Welles penned a post for the blog, Fogcutter News, titled, “Our Mayor is an Embarrassment.” A call to the Welles’ home wasn’t returned, but in an email to New Times, they said, “What I posted pertained to unwanted signs placed on a friend of mines [sic] property on the waterfront. I also posted that my husband 2 years ago took these down DAILY.....as they were not permitted or requested by the property owner.”

Wixom told New Times she had a sign torn in half, adding, “I would never condone somebody taking my signs, their signs, or somebody else’s signs.”

Aside from the typical political fights, Morro Bay still has serious problems in need of resolution. The city is almost entirely dependent on state water, which is anticipated to shut off by 2015, barring biblical-level precipitation sometime soon. City officials currently rely on ongoing conservation efforts to make supplies last, and they hope in the future to build partnerships with other nearby municipalities, reclaim wastewater with a new wastewater treatment plant, and restart the city’s desalination permit. However, desalination is expensive—about equal to the cost of debt service for state water, which the city will continue to pay regardless of whether the state system is feeding water.

The economy was another popular topic among candidates at the April 17 debate. Wixom joined a chorus alongside Johnson and Headding, who criticized the city’s depleted general fund reserves. Irons, however, defended that the city continues to meet its mandated reserve levels set out in its own policies to reserve 27.5 percent.

Critics of past city policies point to Schultz’s and Lueker’s contracts, which were modified to provide nine months of severance payments rather than six. The contracts went into effect Nov. 1, 2012—two months before Irons and Christine Johnson took office—as the result of a closed session meeting, though there exists no report of that closed session decision.

As for the candidates’ campaign budgets, Irons has so far out-raised Wixom, with $7,063 in contributions between Jan. 1 and March 17 compared to her $3,850.

The mayoral election will be decided in the June 3 primary. If no one candidate gets more than 50 percent of the vote in the race to fill Johnson’s seat, there will be a runoff in the November general election.