Cracked earth and dead brown grasses and shrubs barely hanging on to their existence lead from a parking area to the Estero Bluffs shoreline.

The land is so thirsty, and people with white buckets are crawling all over it picking up trash with pincers. It’s Saturday, Sept. 17, and it’s the 32nd annual California Coastal Cleanup Day. Nearly 1,200 volunteers showed up between the hours of 9 a.m. and noon at 30 shore-hugging sites from San Simeon Cove to Oceano Dunes—and also Oso Flaco, Lopez, and Santa Margarita Lakes—to collect debris left behind by not-so-eco-conscious visitors. 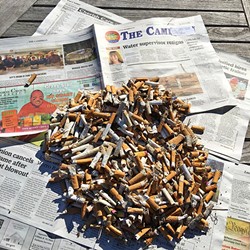 Luckily, Estero Bluffs isn’t one of those trashy places where people litter the ground with cigarette butts, soda cans, and whatever else they feel like not carrying. One volunteer told me there was hardly anything to pick up, so she bee-lined it for her car, slinking between two pieces of barbed wire on a fence, drove to the next parking area along Highway 1 north of Cayucos, and renewed her search.

Oceano Dunes State Vehicle Recreation Area, on the other hand, didn’t have quite the same problem. The Environmental Center of San Luis Obispo (ECOSLO), which has organized the event for the past 12 years, reported that this year’s volunteers picked up more than 1,000 pounds of trash from that area. It was where volunteers collected the most debris. Pirates Cove came in a close second, with 840 pounds of stuff. Third was Arroyo Grande Creek with 703 pounds, fourth was Morro Strand Dog Beach with 661 pounds, and fifth was Lopez Lake with 493 pounds.

In total, volunteers swiped 5,445 pounds of trash from coastal habitats and 1,067 pounds of recyclable material. Beachcombers collected 1,000 more pounds of debris than last year. One volunteer spent an hour fishing countless cigarette butts out of the sands on Moonstone Beach.

She said ECOSLO board members pointed out that there are probably fewer cigarette butts littering the coast than there were 20 years ago, but it’s still the No. 1 item that’s cleaned off the beach.

“So that’s a problem,” Ciesinski said.

ECOSLO volunteers also found a recliner at Pirates Cove; a Christmas tree, nearly 1,000 nails, and several pallets at Morro Strand Dog Beach; and a checkbook at the Pismo Pier.

A press release from the organization said that while some of the trash was left by beachgoers, most of it originated elsewhere, traveling to the beaches via rivers and storm drains.

Do your part by not leaving your trash behind, and by volunteering on Make A Difference Day, Saturday, Oct. 22, from 9 a.m. to noon. ECOSLO and SLO County Parks will be doing cleanup and trail work at Santa Margarita and Lopez lakes. Find out more information at ecoslo.org, by calling 544-1777, or finding ECOSLO on Facebook.

• Tickets are now on sale for the Paso Robles Children’s Museum’s annual Cioppino & Vino cook-off. It will be Nov. 6 from 1 to 4 p.m. at the Paso Robles Inn and will feature cioppino from local chefs, wine from local wineries, cheese tastings, and live and silent auctions. Tickets are $65 per person and proceeds benefit the museum’s programs and daily operating expenses. Purchase them online at cioppinoandvino.com or pasokids.org.

• Buona Tavola restaurants in Paso Robles and San Luis Obispo raised $2,500 on Sept. 8 to assist people affected by the Aug. 24 earthquake in Italy. The restaurants served a namesake dish from Amatrice, the town most affected by the earthquake. For more information, email info@allepiasalumi.com.

• On Sunday, Oct. 9, from noon until 3 p.m., Sunny Acres is celebrating Sobriety Month and progress on its new 8,000 square-foot, 14-bedroom recovery home. Sunny Acres is an independent, clean and sober recovery program located at 10660 Los Osos Valley Road in San Luis Obispo. The event is a thank you to the community for financial and in-kind donations to the facility’s building fund. There will be hot dogs, chips, and lemonade; you can tour the in-progress recovery home and check out the Bargain Barn or the new outdoor succulent garden.