Left of right and right of left

A longtime photographer and teacher has his first solo exhibit

When he was 10 years old Tony Hertz used to study the photographs in Life Magazine. Now, he teaches photography at both Cuesta College and Cal Poly, and his images have been featured in countless publications, including LA Times, New York Times, Sunset Magazine and USA Today. And he just began his first solo exhibition, “Centered: Photographs by Tony Hertz” which will run through July 6 at the Art Center.

It was while pursuing an AA degree at a college in San Bernadino that Hertz turned what had been a childhood interest into a hobby. After college, he drove the circulation truck for the San Bernadino Sun, still fascinated by the people behind the camera lens.

“I enjoyed watching the photographers there,” he said. “I really followed their work closely.”

Hertz moved to San Luis Obispo to attend Cal Poly, majoring in journalism with a concentration in photojournalism. While there he met James Hayes, a Mustang Daily advisor who Hertz still regards as a mentor to this day. Hayes also worked as a part-time features editor at The Tribune, which would allow the two the opportunity to work together after Hertz’s graduation. He also befriended a former Life Magazine photographer and Cal Poly professor, Mark Kauffman. When Hertz began a later phase of his career—teaching—it was Kauffman who would help him develop his lesson plan.

Following a natural trajectory, Hertz worked as a photo editor at the Mustang Daily before beginning an internship at The Tribune. When he graduated, The Tribune offered him a job as a regular photographer. He would spend the next 10 years photographing every imaginable subject—news, sports, features.

Eventually, Hertz decided that he wanted to begin taking photographs for himself. He had always harbored a particular fondness for landscape and nature photography and the Central Coast is certainly endowed with a bounty of land and seascapes.

The Shell Beach resident has been stringing for big name papers and magazines for well over a decade, but the work remains irregular.

“I had a number of assignments for USA Today when they started out, particularly about nuclear power,” he said. “So it’s been a lot of Diablo Canyon.” Most recently, the newspaper published one of Hertz’s images in mid-May.

Over the years he has supplemented his income from freelance photography with his dual jobs as a college-level photography teacher. He taught PhotoShop when only a few people in SLO were proficient in the new software, the same photojournalism class that he once took at Cal Poly, and at Cuesta he teaches traditional photography, traditional meaning developing film in a tray in a dark room. 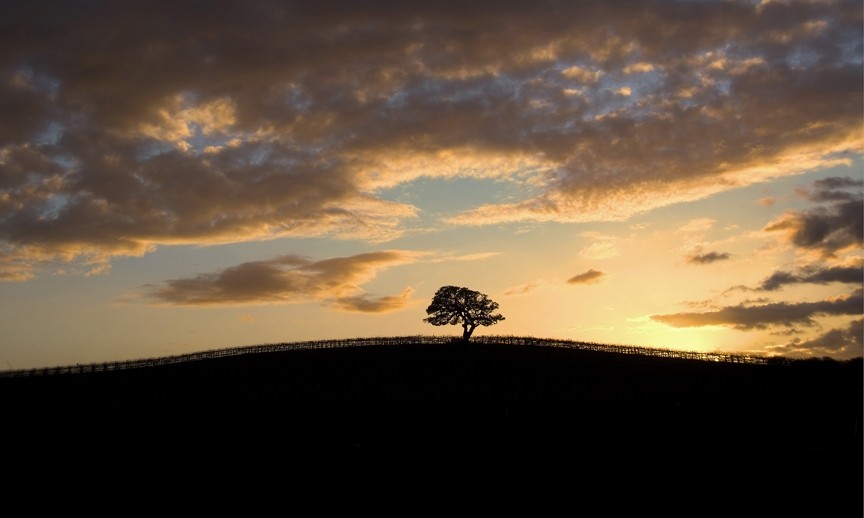 SLO Art Center curator Gordon Fuglie found Hertz’s work online, while looking through the Cuesta art department faculty Web pages. Hertz is modestly surprised and pleased that Fuglie invited him to exhibit at the Art Center, despite the fact that many of the top papers and magazines in the country have been purchasing his work for years. Fuglie played a definitive role selecting the 10 images that would be featured in the exhibit, assembling a group of images that Hertz says represent a good mix of his landscape subjects, from the ocean to the forest to vineyards, and the Carrizo plains.

Hertz, who characterizes himself as an outdoor person, often watches for the rare cloudy day in SLO, a welcome opportunity to add another dimension to his photography. And while the majority of his images were shot locally, he isn’t interested in deliberately limiting his artistic scope.

“It’s not that I’m only shooting this area,” he explained. “I shoot in this area because it’s beautiful and it’s close access. Someone once said ‘do the best with what you can, what you have, and what is nearby.’ We live in a beautiful area.”

Centered: Photographs by Tony Hertz will be on display at the SLO Art Center through July 6. The Art Center is located at 1010 Broad Street and is open 11 a.m. to 5 p.m. every day except Tuesday.