Passing on a love of hot jazz

Call it what you want—Dixieland music, hot jazz, or early jazz—it’s quintessential American music that started in New Orleans and gained prominence with the 1917 release of the Original Dixieland Jazz Band’s million-selling record, then gained even more steam thanks to Louis Armstrong’s All-Stars. 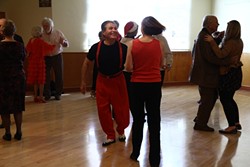 The sound combined earlier brass marches, French quadrilles, ragtime, and blues, and it used horns and reeds out front with a rhythm section consisting of a guitar or banjo, a string bass or tuba, and drums.

The style moved from the south up to Chicago, but the Dixieland sound was eventually eclipsed by the advent of bebop in the 1940s. In danger of extinction, Dixieland revivalist groups soon began springing up around the country, and we have one of our very own right here in SLO County: The Basin Street Regulars.

They meet one Sunday every month in the Pismo Beach Vets Hall to play, listen to, and dance to the music of Fats Waller, Jack Teagarden, Benny Goodman, and the others who made hot jazz so much fun.

The group’s objectives are simple: promote and preserve traditional jazz, provide a meeting place for musicians to perform for appreciative audiences, and create a place for young musicians to learn from more experienced players and carry on the legacy of early jazz.

They have about 500 members, and as many as 300 show up each month to listen to other members perform in groups of up to a dozen. They’re also host to guest bands, as well as student bands.

On Sunday, March 24, head down to the Vets Hall at 11 a.m. to hear the Basin Street Regulars jam, followed by guest act the Midnight Rose Jazz Band at 1 p.m., then the Cabrillo High School Jazz Band at 2:15, then a final set by Midnight Rose at 3:15 p.m.

This is a terrific group that’s been going strong for 36 years now, and they’re also well known for their annual Jubilee by the Sea event, which usually runs three days in October and features bands from all over. Working with the high school and college bands is perhaps the most important thing they do to carry on their legacy.

“No. 1, the students get a chance to play in public,” said Basin Street publicist Charlie Blair, “so it helps boost the schools’ music program, and the kids get experience by playing with some of the more senior people. I believe it’s a value added for their regular music education. Unfortunately, a lot of Dixieland jazz outfits like ours have trouble staying afloat, so it’s important to get the young people interested. Come on down. It’s a fun group and a great way to spend a Sunday afternoon.”

When I hear local gal Amber Cross’s reedy voice, I feel transported to Appalachia 100 years past. The singer-songwriter from the Old Time Fiddle & Banjo Show is releasing her debut album, You Can Come In, on Saturday, March 23, at the Red Barn in Los Osos. 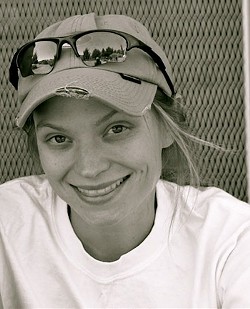 The album features excellent musicianship and sound quality, but I have a feeling these songs would sound just as great recorded on an old wax cylinder.

Check out the lyrics to the title track “You Can Come In”: You can come in but you can’t stay long. This is my house and I like living alone. And I don’t need a boy even if he’s grown. I guess I don’t mind if you take off your shoes. They slip off easy and on again too. And like I said you’ll be leaving, you’ll be leaving here soon.

“When Amber Cross landed in our county in the fall of 2011, word got around pretty fast among the music community that something special was in our midst,” wrote Charles Duncan of Ranchers for Peace, who co-produced Cross’s new album. “People were talking about ‘that voice.’ I had a chance to catch her show not long after, and it only took a couple lines of ‘You Can Come In’ for me to see what all the fuss was about. This was an exceptional singer, an authentic sound, with a straightforward, honest perspective. Yeah, a little girl with a big voice. But what captured and held my interest was the other kind of voice: the writer’s. Amber gets the words onto paper without damaging the feeling behind them. She gets the truth covered, no more, no less, no spin, and precious little embellishment. And then she sings those words the same way. It’s that marriage of the voice we can hear and the voice we can feel that makes her music so satisfying. That’s the secret sauce we tried to preserve and deliver, fresh to the listener, in these new recordings.”

According to promo materials, “It will be a night full of celebration and music with many special guests. On display that evening will be Amber’s full collection of trademark custom flannel shirts, collected at garage sales and thrift stores. She sells vintage recycled shirts, beautiful and unique plaids customized with the name or phrase of an original song embroidered on the cuff. They sell like hotcakes.”

The show starts at 5 p.m. with a potluck and a performance by the potluck band. Amber Cross plays at 6 p.m., and the show costs $10. Bring some extra dough and buy this terrific CD.

Three on the road

If I close my eyes while listening to Shoestring Trio’s new self-titled debut CD, I feel like I could be anywhere: at a sunny outdoor table in a Parisian café, in a hammock on a tropical isle, at a hipster party in 1920s New York. 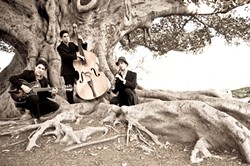 The group is on a West Coast tour in support of their new album, with a stop on Saturday, March 23, at Steynberg Gallery (8 p.m.; all ages; $10). What you hear on their new album is exactly what you can expect to hear in concert since the album was recorded live to one-inch tape in Los Angeles.

Obviously the unifying experience was touring with French-Chinese chanteuse Jessica Fichot, where the three bonded on the road and developed a chemistry that led to the birth of Shoestring Trio, “a side-project spawning a new repertoire and upcoming performances throughout the U.S. and Europe,” according to the band.

I only wish the recording was longer.

Matt Costa refuses to rest on his laurels or slip into routine. On his newest self-titled album released last month, he worked with Tony Doogan (Mogwai, Belle & Sebastian, The Mountain Goats) to record the album in Glasgow, Scotland, with members of Belle & Sebastian.

Filled with horns, understated but beautiful melodies, lush harmonies, and a nod to the beautiful folk songs of the ’60s and ’70s, the recording has been gathering critical praise and winning over new fans.

Bob Schneider’s also back for a return engagement on Saturday, March 23 (doors at 7 p.m.; 21-and-older; $20 presale or $25 at the door), with Matthew Patrick Davis opening.

Schneider is a musician who plays through thick and thin. He was a member of Joe Rockhead, Ugly Americans, and The Scabs. He seemed poised for greatness with the release of his second solo CD Lonelyland, his major label debut, but then he was dropped by that label, then another, but he doesn’t worry himself with commercial success, and he continues to create beautiful songs, like his newest collection, the soon to be released Burden of Proof—his 12th solo studio album.

He’s a guy who likes playing smaller venues and thrives on stage energy. He also dated Sandra Bullock. The dude’s got coolness written all over him.

On Sunday, March 24, The Psycho Realm hits SLO Brew (doors at 8 p.m.; 21-and-older; $20 presale or $22 at the door). I’m not familiar with their music, but according to their bio, “Psycho Realm is a Latin political hip hop supergroup started in 1989 by brothers Sick Jacken (Joaquin Gonzalez) and Big Duke (Gustavo Gonzalez) from the downtown Pico-Union area of Los Angeles. The first recorded Psycho Realm song, ‘Scandalous,’ was released on the soundtrack of the film Mi Vida Loca in 1993.”

On Monday, March 25, check out Afterall (doors at 7 p.m.; all ages; $8 presale or $10 at the door), with Seven Year War opening. Afterall is a local quintet that formed in 2007 by singer Cody Mello and bassist Tim Mello. By 2012, they had solidified their line-up and recorded Imprints, their debut album, which they’re now starting to promote. Seven Year War is an OC punk quartet, whose newest album is Welcome to the Work Force.

Singer-songwriter and banjo player Erin Inglish brings her down-home sounds to the SLO Down Pub on Thursday, March 21 (6:30 p.m.; all ages; pass the hat), and special guests will include Girls & Boys.

Appellation Bluegrass Band returns to SLO Down Pub on Friday, March 22, to deliver some fast-paced, high-voiced American acoustic music at 7:30 p.m. “Make light of hard times, lightly bash the opposite sex, and reminisce about low-priced hot dogs and gasoline with the Abbies,” said the band. “It’s a free country and a free gig—please fill the tip jar.”

Burning James and the Funky Flames will be setting D’Anbino’s Tasting Room “on fiyo” on Saturday, March 23, at 8 p.m. This is an incredibly entertaining, high energy, soulful and funky New Orleans-style act. It’s a $10 cover; $5 for wine club members!

The Artisan Guitar Ensemble will give a benefit performance at St. Benedict’s Episcopal Church in Los Osos at 2 p.m. Sunday, March 24. Proceeds will go to the G. Roger Bailey Classical Guitar Scholarship to further musical education for local students. Donations of $20 are appreciated. For reservations, call Charlotte Bailey at 771-8138.

Frog and Peach is host to an interesting double bill on Sunday, March 24, when Los Angeles-based trio Bird Concerns will play a set of folk, rock, and jazz-inflected pop before acting as backing band for L.A.-based folk-rock artist John German. The show starts at 10 p.m.