Painters bring contemporary, end of the world aesthetic to Paso 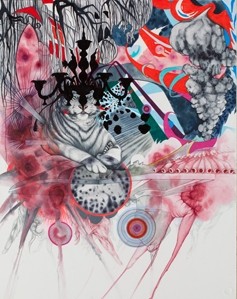 In “Chromageddon,” Adrienne Allebe and Michael Burns’ exhibit at the FireFly Gallery in Paso Robles, the artists bridge multiple antipodal paths, most notably dancing between representational and the abstract but also melding sculpture and painting. The result of their willingness to experiment is a collection that merges animals with mushroom clouds, sharp pustules of paint jutting from playful swatches of color in sharp geometric forms.

The duo teaches art together at Cuesta College, or at least they did until this summer when Burns relocated to Washington. When gallery owner Emily Miller offered Allebe an exhibit at FireFly, the painter opted for a joint show. 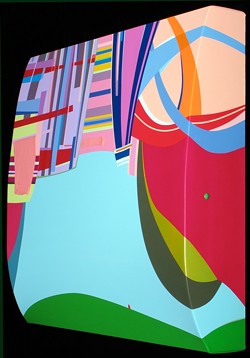 “We both use really bright colors, but obviously my work is more representational,” she explained, prompting a discussion with Burns as to why he prefers the abstract realm.

“Representation’s hard because [viewers] want to lock down the meaning,” he explained. “That’s why I stick with the abstract. Otherwise, you get locked on to meaning.”

In lieu of a hand-fed meaning, Burns offers his audience a conundrum—paintings that can also be interpreted as sculpture. The pieces are deliberately small to make it easy for people to insert the little cubes into their lives and homes. He describes his approach to color as an exploration, with vivid results that reference advertising as well as technology. They’re landscapes, but never in the literal sense. Lacking the implicit permanence of a land or water mass, Burns’ images were created with dislocation in mind.

Spin one of Burns’ pieces to the right or left and you get another adjective for his work: modular. By painting the sides of his canvases, and stretching some to engorge the center, each piece becomes more like five. Positioned one way, a piece might concede a hidden band of lilac, but spun in another direction the same painting could reveal a green freckle on an otherwise flat plane. These painstaking details allow the artist to mull over such questions as how we live with objects, and how they become a part of our lives.

Allebe shares Burns’ penchant for colors that seem to vibrate right off the canvas, except that her palette, she claims, was borrowed from nature. 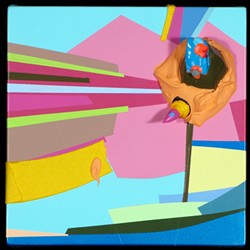 “You usually say nature and people think browns and greens but nature has all these neon colors,” she explained. While many of Allebe’s subjects might look like they fell from the pages of a science-fiction novel, they are, in fact, reality. Albeit reality on a scale so small that you would have to look through a microscope to really see it. For years, Allebe’s work has reflected her interest in various life forms, from microorganisms to white tigers. But recently, it’s taken an environmental turn with depictions of wildlife, industry, and technology amalgamating in a manner that only a science-fiction film—or Allebe’s fertile imagination—could have anticipated. Man-made structures clash with animalistic prints and faces, a white tiger masked by a black chandelier emerging as a masked avenger of environmental sins and transgressions.

“This place is perfect for that subtext of everything looks pretty on the surface,” she said, suggesting that the Diablo nuclear power plant and Vandenberg Air Force base lend the picturesque landscape a dangerous quality.

In her more recent pieces, Allebe’s central images are edged in by white space, something her earlier canvases of mushroom clouds unfurling across blood-red skies were entirely without. Yellow is another recent addition to her color palette as well, pulling her still farther from the magenta tones that streaked violently across her canvas in years of yore. Utilizing a mix of oils, acrylics, watercolors, and colored pencil, Allebe’s works are remarkably detailed, an expression of the sheer pleasure of drawing.

“I think our work’s pretty contemporary for this area,” said Allebe. “I think scientists and doctors and engineers would like our work, they would probably relate to it.” ∆