Lessons learned: Cal Poly's women's volleyball team had its first home game in more than 600 days, and getting there wasn't easy

Photos Courtesy Of Cal Poly Athletics Communications HOMECOMING After more than 600 days away, the Mustangs' volleyball team returned to the Mott Athletics Center court in 2021.

Watch the Mustangs play against the University of Washington on Sept. 11 in Malibu. Attend their next home game against Loyola-Marymount University on Sept. 18. For more information, visit gopoly.com/sports/womens-volleyball/schedule.

A giant promotional poster of Meredith Phillips welcomed Cal Poly sports fans back to Mott Athletics Center on Sept. 1. Inside, the real Phillips entertained the crowd by setting a career-high of 14 kills for the Mustangs' volleyball game against Texas A&M.

It was the first home game for the women's volleyball team since December 2019, after a COVID-19-imposed hiatus benched them for more than a year. Spectators wondered if Cal Poly's team could keep its title of the nation's longest active home winning streak. But the Mustangs lost to the Aggies in a 3-2 tussle, effectively breaking their uninterrupted five-year home reign.

"It's exciting that we have the whole season to work and improve," Phillips, the team's co-captain, said.

"The goal of preseason is to learn with each set and match we play, gaining experience about the flow of the matches, and how we can be more efficient and effective," she said.

The volleyball team will play a full season in 2021-22. The preseason match was their first home game in more than 600 days. It was also their third game since 2019, of which they've only won one. Unlike regional conferences such as the one Texas A&M belongs to, the Big West Conference was the only college athletics association that canceled its games due to the pandemic. It caused Mustangs teams to lose out on competitive matches that coaches said are crucial for improvement. 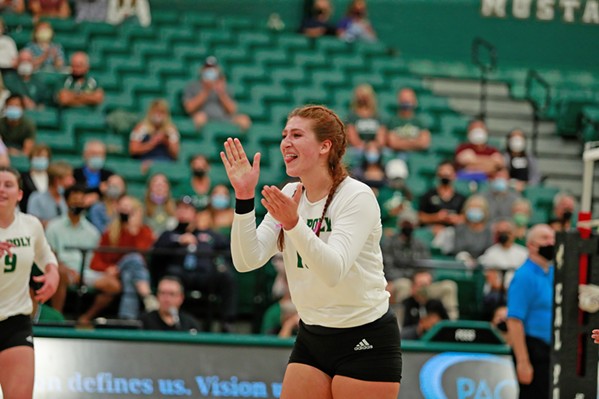 The Sept. 1 opener was a test for Cal Poly Athletics in a post-vaccine era. SLO County reinstated the indoor mask mandate the day before the game, on Aug. 31, because of surging COVID-19 cases on the Central Coast. In mid-August, the athletics office received instructions from the state to ensure that everyone attending indoor games is masked up and vaccinated. Unvaccinated attendees have to provide a negative COVID-19 test dated 72 hours prior to the event.

Even without students returning to campus just yet, 783 people packed into Mott for the home game. Volleyball fans often stomped their feet in rhythmic unison, mimicking a mustang stampede to show their support.

"I think a lot of people in our community are ready for this ... they want to be together. We're going to see some strong returns," Cal Poly Athletics Director Don Oberhelman said.

With football and soccer also playing their first games since the pandemic this fall, college sports are back—but the forced downtime during 2020 took its toll on athletes.

"It was really sad because I'm from out of state, so I was really far away and didn't get to see my teammates. But there was never a thought in my mind that we weren't going to get a season," said Phillips, a Houston native.

When the lockdown began in March 2020, athletics administrators decided to stop practice for only two weeks. It grew to several months before the players could return to Cal Poly in August that year to continue with their training.

"It wasn't until we were back on campus when we found out that our fall season got canceled, which was really, really upsetting," Phillips said. "That ended up happening for every team in the NCAA except for the Big West. That hit us really hard because we had to sit and watch everyone in the nation play a volleyball season except for us."

When the Big West Conference, which includes several state universities like

Cal Poly and UC Barbara, canceled its 2020 fall season, the pause affected a slew of sports, including women's volleyball, and men's and women's cross country and soccer.

The players took on a mammoth task when they chose to return to campus for training last fall. Away from their families, they navigated the initial waves of the pandemic together. The girls attended a full roster of online classes after daily four-hour practices. 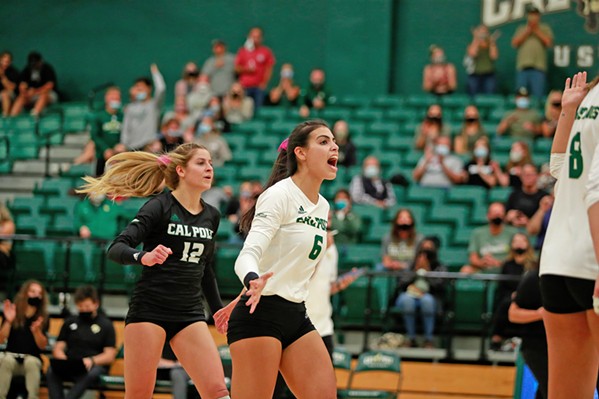 At the time, Cal Poly enforced a mask mandate. Later, when vaccines were available, all players and coaches voluntarily got their shots. Oberhelman said that unvaccinated players would still be a part of the team with their scholarships intact but they wouldn't be allowed to actively play.

The team had to play with masks on, and the ball had to be sanitized after every pass.

"It's hard to breathe with something covering your mouth like that. It's hard to communicate with your team and coaches too," said Mustangs setter Avalon DeNecochea.

It was a compromise the team had to make if they wanted to continue playing volleyball, mask acne—aka maskne—and all, Phillips added.

Then came the COVID-19 outbreak. Phillips and a few other players tested positive, so Cal Poly sent the entire team home for the winter. They couldn't meet again in person until August 2021.

But so many missed practices wasn't as big a deal for some players. In June 2020, DeNecochea had hip surgery because of volleyball injuries. It made her see the silver lining behind the canceled season. Normally, DeNecochea would have had to sit the season out completely, but the pandemic gave her the time she needed to fully recover.

"Once volleyball was taken away, it made me appreciate it even more. It's really special that we actually get to participate in sports like this at a high level," she said.

On the flip side, defensive specialist Taylor Rose said that being out of practice made them forget about the smaller details when they returned to competitive games. They lost their first post-COVID-19 game to the University of Louisville, and it was a learning experience. Rose admitted that the smaller things—a close point difference or a referee making a bad call—got to them.

"We underestimated a little bit about how mentally strong we have to be in the game of volleyball," she said.

The coaching staff had a tough time, too. Head Coach Walters had little help because of the lockdown. One of her assistants switched to a job at UCLA, which, coupled with California's pandemic hiring freeze, left her understaffed.

In addition, both she and her other assistant had babies during the pandemic. On the plus side, the absence of a strenuous season meant they could spend more time with their families. 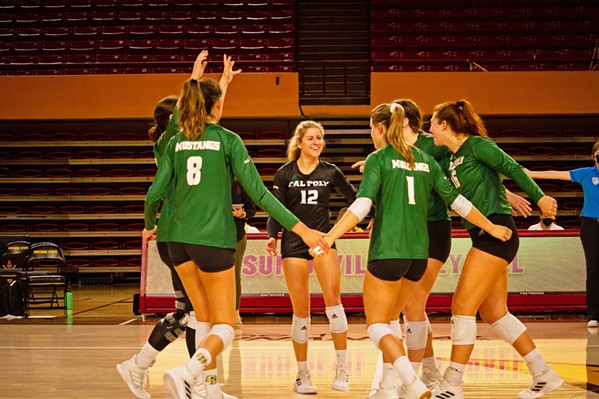 "Division 1 athletics and the grind of being in season is a lot. You're away from your loved ones a lot just like the student athletes are. I felt like it was the right time for me," Walters said.

In a way, the forced downtime allowed the team to reset mentally. Rose said that it did hit the players hard, but they weren't alone.

"Playing volleyball is your purpose. When that goes away, it's like, 'Oh my gosh, what am I doing?'" Rose said."My family was a huge help in pulling me out of the mental downfall I was in."

The volleyball team also conducted a mental health webinar to make sure players and coaches were coping well.

"These girls have been playing volleyball since they were 12 years old through college. There aren't free weekends and there isn't time to spend with families. All of us shared joy in that time that was given to us," Walters said. Δ