These days, soda is deemed a four-letter word. Sugary, fizzy pop is blamed for everything from childhood obesity and diabetes to rotting the teeth right out of our heads.

But not all sodas are made with chemicals you can’t pronounce or wacky, artificial colors that glow beneath a black light (I’m looking at you, Mountain Dew). Much like the craft beer industry, sodas are catching up in terms of flavor, ingredients, and local love. Enter: San Luis Obispo’s Sunshine Bottle Works, all natural, handcrafted soda brewed right here, on the Central Coast.

Since 2015, owner Douglas Martin has been on a mission to offer a better soft drink alternative to adults and kids alike—one that brings a little pep in your step as well as interest to your daily half sandwich (but won’t make you crash and burn).

Made with 100 percent cane sugar and a hefty dose of California sunshine, Martin’s cream, root beer, and spezi flavors are refreshingly different. The good news? You can now find them popping up on local store shelves like California Fresh Market and High Street Deli in San Luis Obispo.

“I knew that people would be willing to move away from national soda brands if there were better options out there,” Martin said. “Our sodas use more spices, oils, and extracts, but 20 percent less sugar than national, mass-produced, and so-called ‘gourmet’ sodas.”

Still, these are not “health store” drinks. They are made, first and foremost, for pleasure. Served chilled, they taste awesome on their own (or mixed with booze). I mean, soda is meant to bring simple joy, right?

Take Martin’s spezi, a cola-orange flavor that is ridiculously popular in Europe. It’s fruity and satisfying with a zesty kick and just enough sweet tanginess to keep you wanting that second slurp of the straw.

“Having lived in Germany for about 20 years, and visiting family in Germany while growing up, we always drank spezi. Back then, you’d have it manually mixed; half cola, half Fanta,” Martin said. “This was a flavor profile I really grew to love, and I wanted to share that with the folks here in San Luis Obispo County.” 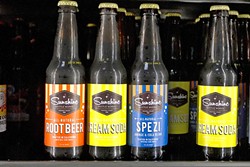 When Martin began crafting his debut root beer, the goal was to create a soda that fit the Central Coast’s health-conscious, down-to-earth vibe. The result: the intense flavors of natural sarsaparilla, vanilla, anise, and clove, without all the over-the-top sweetness. It is indeed an homage to the rich, root beer flavor you crave when chowing down on a hot Nardone’s pepperoni pizza. The cream soda offering—sweet, creamy, frothy, natural—is a vanilla bomb with way less guilt.

But are people really ready to freak out over craft soda the way they do over beer? Martin thinks so, and he’s got quite the track record to know what he’s talking about. According to the brewer, back in 2008, craft beer made up less than 4 percent of the total beer industry—and you know what happened there. These days, Martin believes craft soda is hovering at around 1 percent of the market but is poised to break out.

“I see a huge niche for this type of craft soda. People are moving away from national, big business, and they want to support little and local. I want to be the local brand for the Central Coast,” Martin said.

Sunshine Bottle Works is about to go on tap for both Batch locations, as well as Lincoln Market and Spike’s in SLO. The list is growing longer by the day, it seems.

For the brewer, this is a satisfying place to be. However, it’s not the only thing that gets him jazzed. Martin wants Sunshine Bottle Works to be the root beer that the local little league teams grab after a winning game; the cream soda shared on a first date. It’s an old fashioned idea with a very modern twist.

“I want to contribute to the SLO County community, to be able to raise money for nonprofits, and bring something new to the table,” Martin said. “Through Sunshine Bottle Works, I aim to do that.”

Hayley Thomas Cain is sharing a cream soda with her husband. She can be reached at hthomas@newtimesslo.com.