Writer-director Thomas Bezucha (The Family Stone, Monte Carlo) brings Larry Watson's 2013 novel to the screen. A couple—Margaret (Diane Lane) and George Blackledge (Kevin Costner)—grieving the untimely death of their only son, James (Ryan Bruce), go in search of their grandson, Jimmy (co-played by Otto and Bram Hornburg), who's spirited out of town by their daughter-in-law, Lorna (Kayli Carter), and abusive new husband Donnie Weboy (William Brittain). Worried about Jimmy's safety, they leave their Montana ranch and strike out for North Dakota, where the Weboy clan lives. (113 min.) 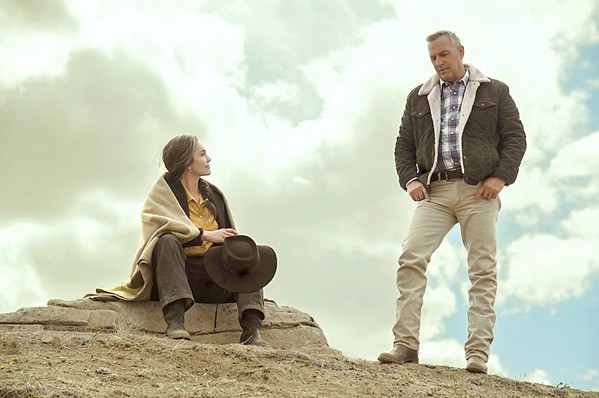 Glen Set in 1963, this neo-Western feels a lot like a Cormac McCarthy story (All the Pretty Horses, No Country for Old Men). It's quiet and bleak, elegiac and mournful, with unromanticized violence and stoic characters navigating difficult circumstances. This is Margaret's story. She's the one who witnesses Donnie's cruelty. She's already loaded up her station wagon for the trip to find Jimmy when George—a retired sheriff—returns. He isn't sure it's their place to go after Jimmy, but strong-willed Margaret is going with or without George, determined to see Jimmy safe. They have no idea what they're in for. If they think Donnie's their biggest obstacle, just wait until they meet the Weboy family and its matriarch, Blanche (Lesley Manville). This is a soulful crime drama anchored by an amazing veteran cast. Costner and Lane are dependable as always, and Jeffrey Donovan as Donnie's uncle, Bill Weboy, is pure grinning menace. As for Manville's Blanche, she's raised a clan of misogynists, and her iron grip on her three sons—including Donnie's brothers Elton (Connor Mackay) and Marvin (Adam Stafford)—is complete. Even the local sheriff dares not cross the Weboys. Suspenseful and engrossing, this film released in pandemic-crippled theaters last November will hopefully get the audience it deserves now that it's at Redbox.

Anna I hadn't even heard of this film when you mentioned it, which is definitely a sign of the COVID-19 times since it's got a cast of such heavy hitters. Costner is so great as the stoic and measured George, and Lane equally as phenomenal as the maternal and steadfast Margaret. The Weboys' reputation precedes them and with good reason. Blanche is straight-up evil, and she's groomed all the men in her life to follow suit. Donovan is especially chilling as Bill; it gives me shivers just thinking about that cruel grin! It's got the feel of a Western with the soul of a drama, and with that you can't expect a wholly happy ending, but it satisfies nonetheless. While George and Margaret are on their way to find Lorna and Jimmy, they run into a young Indigenous man who ran away from the Indian school where he was given the name Peter (Booboo Stewart). He's wary of everyone and afraid of being dragged back into the world he escaped, but over a fireside chat, he comes to trust the two travelers, albeit with reservations. The human connection here is really tender, and I was riveted by this film both in wondering what those dastardly Weboys would do and emotionally as the tale plays out with dark and dreadful lows.

Glen I think that side plot with Peter is one of the reasons it reminded me of a McCarthy story. Peter is the embodiment of America before it was colonized. He wants to live off the land and be at peace. The tearing asunder between past and present seems to be a reoccurring theme in McCarthy's tales, which don't offer feel-good Hollywood endings. If the Blackledges don't extricate Jimmy from the Weboys' clutches, he's destined to be groomed into their cruel worldview. It's a fight for his future, and we see how Blanche, Bill, and Donnie are trying to twist his mind. Lorna is shellshocked by fear, but like a lot of battered women, she doesn't know how to escape. I liked that this was Margaret's story more than George's, and that she was a foil to Blanche. The build-up to the conclusion is slow and steady, but when we reach the end, it comes with a furious release. It's got a potency you'll not soon forget.

Anna I would definitely say the turns taken were unexpected, and the Weboys were villains I didn't see coming. An abusive husband to take down, sure, but a whole clan of angry jerks who are convinced everyone and everything in the world is against them and they'd rather burn it all down than concede one tiny inch? Didn't expect that. George and Margaret's relationship is a really interesting piece to this puzzle. They love each other in the way you only can if you've been with someone for what amounts to nearly your entire life—your shared past, present, and future are intertwined. Yet Margaret is her own woman, going on her quest with or without her husband and come hell or high water. She's dealing with the tragic and immense loss from her son's death, and the closest thing in the world to him has now been ripped from her. The same strength that allows mothers to lift up cars when their child is trapped lies in Margaret, and as soon as Jimmy is gone, a flame is lit inside her. The storyline here is aces, and as you said very McCarthy-esque, but the icing on the cake comes from some jaw-dropping performances from these veteran actors. This one is definitely worth a watch. Δ