The government wants to kill my television; they can have it 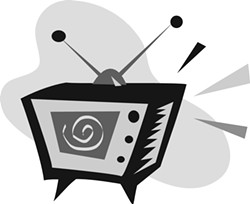 Let’s put it right out there: People who don’t own televisions can be annoying. Some seem to try to find any way to let you know that they don’t, you know, do that, as if watching television is too common and too beneath them. Some set conversation traps, as in:

Them: “Did you see last night’s episode of Lost?

Them: “Oh, I wouldn’t know. I don’t have a television, so I was reading Marcel Proust.”

You: “Ah, yeah. She’s good. I always wondered you how you pronounced that name.”

The truth is I think television programs can be pretty great. The A-Team rocked my world when I was 10. We all took study breaks for Cheers reruns in the dorms. I thought Junkyard Wars (the British version) was fantastic in early adulthood, and I’ve been a nut for Heroes these past couple of years. So I like television just fine. Fact is, one of the reasons I don’t have cable is because I like television too much. When we stay at hotels, I stay up until 2 a.m., watching four shows at once and switching between them at the commercials.

All this said, through a combination of laziness, grumpiness, and the discovery of better options, I’m going to be letting our television die on Feb. 17, when the U.S. government is ordering that ours go dark. Call it a trial separation. For the past several years, we’ve been an antenna-only family and in San Luis Obispo that means we receive one or two channels at a time, and never the one that broadcasts from just a few miles away from our house.

I refuse to buy cable television not only because I’m easily addicted but because cable’s pricing strategy offends me. The prices seem too high, and you can’t order and pay for just the channels you actually want; it seems controlling, sort of an unfair way of taking advantage of their monopoly. It also seems just old fashioned in this era of buffet-style, choose-what-you-use media consumption.

I also didn’t order one of those coupons for the boxes to convert analog signals to digital and I’m not about to waste 50 bucks without one. (I’m extremely skeptical about the pricing of those devices—it seems that by offering a $40 coupon, the government guaranteed that the price of those things would never fall below $50 or $60.) Anyway, now it’s apparently too late. The government (the same one that apparently stands to make some $19 billion off of this conversion because they’ll be able to free up spectrum space to sell) so far hasn’t shelled out any additional money for more coupons. Thus, even as the economy seizes, the government is forcing this unnecessary, inadequately explained, and special-interest-serving change on the poorest
among us.

All of those reasons partially explain my resistance to making efforts to keep my television signal.

The other part of my decision is based on my growing sense that television’s delivery model is outdated. Commercials are increasingly annoying to me, coming on loud and repeating within minutes of their prior playing. I’m less and less willing to put up with the interruptions, considering the many options available.

I can download movies, television shows, and YouTube videos on my computer. I get shows through the mail on my Netflix service (which also offers programs and movies online.) Whenever someone mentions something interesting that happened on an awards show or a political speech, I can always find it online.

I just don’t have the impression that I’ll be missing much. I love news, but the local news shows I watch focus too often on crime and orchestrated news events, with little enterprise or critical thought on display.

On one recent show on a channel I receive, four of the top news items were 1. A car crash … in Bakersfield; 2. A police officer retiring; 3. Another police officer retiring; and 4. An elderly man who had a birthday party at a Carl’s Jr. Plus, most of the news channels offer their videos in little downloadable segments. This means one can literally watch a  half-hour news show—just the parts you’re actually interested in—in five minutes.

So will it be pain-free to give up television? Not really. I predict I’ll miss it often, particularly sports. Still, I won’t miss sports on television nearly as much as I would have a few years ago. I’ve learned that, with spare time scarce, I can either watch athletics or participate in them. I’d rather surf.

This is just one viewer’s response to the coming blackout, and I predict I’ll be in the smallest minority and I’m not even vowing to give it up for good. If they bring The A-Team back, I’ll shell out 500 bucks for an LCD TV faster than Hannibal can say, “I love it when a plan comes together.” Still, I think this is worth a shot and I have a real suspicion that I’m going to be just fine without TV. So go ahead, turn mine off. Plus, I’ve got a lot of Proust to catch up on. Did anyone see Lost the other night? ∆

New Times’ Managing Editor Patrick Howe fully expects to be better than others once he lets his television go dark. Let him know if he’s right at phowe@newtimesslo.com.