A Rock and Roll Hall of Famer hits SLO Brew 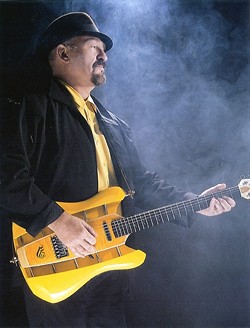 If you don’t consider Dave Mason a rock icon, well then, “We Just Disagree.” Remember that song? That was Mason’s 1977 solo hit, but the British performer got his start with Traffic (he wrote their classic hit “Feelin’ Alright”), and in his early career he played with acts such as Jimi Hendrix (his close friend and collaborator on “All Along the Watchtower”), The Rolling Stones (Beggar’s Banquet), Michael Jackson (“Save Me,” 1980), Eric Clapton, George Harrison (All Things Must Pass), Cass Elliot, and Fleetwood Mac, among others. He’s in the freakin’ Rock and Roll Hall of Fame, after all.

Dave Mason plays SLO Brew on Saturday, Nov. 20 (7:30 p.m.; 21-and-older; $36 presale or $40 at the door), and concertgoers can expect to hear a mix of his classics from his 40-year career—songs such as “Alone Together” and “Let It Flow”—as well as more recently penned tunes. Don’t miss this rock classic!

Of course, that’s not all that’s on the Brew’s schedule. Kick off your weekend in style when folk artist Chris Pureka plays Thursday, Nov. 18 (7 p.m.; 21-and-older; $10 presale or $12 at the door), with opening act Or, the Whale. Pureka just released her third album, How I Learned to See in the Dark, which showcases her “emotional intelligence” and “sonic adventurism.” Later that night, get your comedy on when Zane Lamprey takes to the stage (10:30 p.m.; 21-and-older; $25 presale or $26 at the door) as part of his “Sing the Booze Tour.” Zane’s the star of Drinking Made Easy, which  premiered on HDNet on Oct. 6. The 24 episodes, which followed his national 53-city live comedy tour (also called Drinking Made Easy), highlight the drinking cultures  and customs of U.S. cities. Hear brand new original drinking songs like “Beer I Love You,” “Baby You’re Beautiful, When I’m Drunk,” and “I’m Giving Up Drinking, Again.”

Open your hearts; free your minds

My friend Jenna is an awesome Los Angeles-based stand-up comedienne—funny, pretty, and a hoot to be around. She also used to be a guy, before some very expensive surgery. My other friend Raven is an awesome skater, with a cute bleached blonde bob and long legs. Under those sexy blouses and skirts is a man’s body. My friend, photographer Della Grace Volcano, looks like a man, but he was born a woman—or more specifically mostly a woman. He was a form of hermaphrodite, neither all female nor all male, who through hormone therapy became male.

My point is, not everyone is like you or like me, but the transgendered are people, too: wonderful, loving, creative people who should be embraced and accepted for who they are. If you agree, I hope you’ll come to Mitchell Park on Saturday, Nov. 20, at 5:30 p.m. and join the Transgender Day of Remembrance vigil, which will be led by Rev. Sean Parker Dennison and feature music by Namoli Brennet, who will also perform a free, all-ages community concert at the Unitarian Universalist Fellowship on Sunday, Nov. 21, at 7 p.m.

Saturday’s event marks SLO Town’s Transgender Day of Remembrance vigil, joining more than 500 other cities worldwide in honoring the lives and grieving the deaths of those killed due to anti-transgender hatred or prejudice.

“This is the 12th annual TDOR, but the first in SLO,” explained organizers. “The event is held in November to honor Rita Hester, whose murder on Nov. 28, 1998, kicked off the “Remembering Our Dead” web project and a San Francisco candlelight vigil in 1999. Rita Hester’s murder—like most anti-transgender murder cases—has yet to be solved.

“Although not every person represented during the Day of Remembrance self-identified as transgender—that is, as a transsexual, cross-dresser, or otherwise gender-variant—each was a victim of violence based on bias against transgender people.

“We live in times more sensitive than ever to hatred-based violence. Yet even now, the deaths of those based on anti-transgender hatred or prejudice are largely ignored. Over the last decade, more than one person per month has died due to transgender-based hate or prejudice, regardless of any other factors in their lives. This trend shows no sign of abating.

This sounds cliché, but it’s true: Change begins with you.

On Thursday, Nov. 18, The Porch hosts Bay Area duo Genna Giacobassi and Jesse Dyen during Steve Key’s Songwriters at Play showcase from 6:30 to 9:30 p.m. “Jesse Dyen has been to jail with Daniel Ellsberg. He’s bought beer for Joe Strummer, broken Joan Baez’s guitar string, and done sound for Reverend Al Sharpton. Not enough? He’s also in a musical duo with Genna Giacobassi, performing a unique blend of soul, pop, and folk,” said their press release. “Genna Giacobassi has toured the U.S. and Canada with neo-soul band Fiction Like Candy and released several albums with the band. Her music has also been heard in commercials and films. Jesse Dyen backs Genna’s singing with piano and guitar.”

The JD Project brings its driving blend of rock, country, and blues to the Farmers Market Main Stage (Higuera and Nipomo streets) on Thursday, Nov. 18, from 7 to 8:30 p.m.

Also on Thursday, Nov. 18, the Steynberg Gallery hosts an 8 p.m. concert with Chord Four ($10; all ages). The concert begins with the Jameson Swanagon and Aaron Wolf duo, followed by Chord Four, the Los Angeles-based jazz troupe that “consistently strikes the careful balance between rhythm and harmony in a blend of music ranging from Ghana to gamelan, the Balkans to European art music, and of course jazz.”

The Humboldt Newgrass Tour is coming to SLO when The Absynth Quintet and the Bucky Walters play the Frog and Peach on Thursday, Nov. 18, at 10 p.m. Political activists The Absynth Quintet continue to protest the amount of plastic waste found in oceans, as well as other marine environmental issues—a natural fit since the band members are all surfers. Expect some great picking and Americana music mixed with Django-esque Eastern European sounds.

Two amazing female folkies await you at the next SLOfolks concerts. See Diana Jones perform solo on Friday, Nov. 19, at Coalesce Bookstore (7 p.m.; $15; 772-2880), or see Jones with local chanteuse Jill Knight on Saturday, Nov. 20, at Castoro Cellars (7:30 p.m.; $20; 238-0725). Sonnie Brown will also interview Diana and Jill on her show, Song Town, on KCBX 90.1 FM, around 2:30 or 3 p.m. on Saturday. Jones is the Kerrville Folk Festival 2006 New Folk winner and the Folk Alliance 2007 Best Emerging Artist and Best Song winner. Her song “Henry Russell’s Last Words” was recorded by Joan Baez, and her “If I Had a Gun” was recorded by Gretchen Peters. Folk lovers, don’t miss this one.

The female-fronted, alt-country, Americana experience The Evangenitals is returning to the Clubhouse on Saturday, Nov. 20, at 7 p.m. Apparently the locals and the venue loved the band so much at their last show, they’ve been eager to have the group back for another night of their genre-defying, ballads-to-barn-burning original music. The cost is $5. 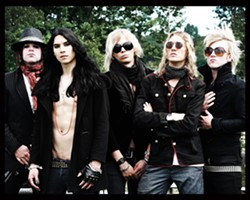 Prepare yourself for a kickass rock’n’roll show on Saturday, Nov. 20, at The Ranch in San Miguel. “The lineup as headliner is signed rock [to Filthy Note Records] act Vains of Jenna, my band Rusted Stone, and also local rock bands Motive and Society’s Child,” said Shawn Logan. “This show is going to be killer, and if you like rock music you, better be here or you’ll never forgive yourself!” This is an 18-and-older show, with $8 presale tickets available from band members, or pay $10 at the door. According to their press materials, “Vains of Jenna formed in the small town of Falkenberg, Sweden, in January 2005. Lead vocalist Lizzy DeVine and bassist JP White had talked the previous summer about putting together a new band. Both had eyed a teenage guitarist named Nicki Kin as the final piece to the lineup along with his classmate, drummer Jacki Stone.”

The Cal Poly Symphony will feature music composed by and inspired by Johann Sebastian Bach in its Fall Concert at 3 p.m. Sunday, Nov. 21, in Harman Hall of the Performing Arts Center’s Christopher Cohan Center. Tickets are $6 for students, $8 and $10 for senior citizens, and $10 and $12 for the public. Call 756-2787. 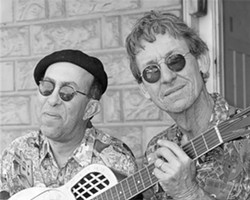 On Tuesday, Nov. 23, at Steynberg Gallery, Steve Key’s Songwriters at Play showcase (6:30 p.m.; all ages; $5) will spotlight local folk heroes Peter Yelda and Craig Nuttycombe, longtime friends who have shared many stages over many years. Yelda’s “Orchids in the Moonlight” appeared on a benefit CD for a Nicaraguan health clinic, and “Warmth of Change” was included on SLO Unplugged II, right before Nuttycombe’s song “It’s Like.” Nuttycombe got his musical start in a high school surf-rock band that included a founding member of Three Dog Night. With musical partner Dennis Lambert, Nuttycombe became an A&M Records artist in 1970. He’s currently a member of the eclectic folk ensemble Café Musique.

OK, first of all, whoever the crazy lady is who keeps calling the authorities on the Clubhouse for having live music, shame on you! The Clubhouse is doing a great job of serving the local music community, and they respectfully shut down their live music by 10 p.m. Your NIMBYism is lame, lady! Either enjoy the awesome music you’re hearing for free, or get some damn earplugs. The world doesn’t revolve around you! Second, Casey McDonald’s Songwriter Night on Tuesday, Nov. 23, will feature Santa Barbara songstress Christina Grimm. Starting at 7 p.m., Grimm will present her new “Songs in the Key of RA” program that combines a collection of “folk-infused pop, rock, and blues with the principles of sound healing.” Listen closely, crazy neighborhood lady. Maybe her music will heal your hardened heart!