In November 2010, a small electrical fire smoldered overnight in the Bon Temps Creole Café, the well-loved New Orleans eatery best known as the colorful hangout spot that has lit fires in the hearts—and mouths—of its patrons since 1995. 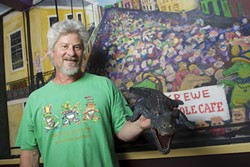 But unlike the satisfying burn that comes after a plate of the Café’s Gumbo Ya-Ya, the aftermath of this fire has kept patrons away from their beloved restaurant for months. Though there was little structural damage, owner Phil Lang explained to New Times that the heat and smoke caused a good deal of cosmetic damage to the front of the restaurant, where the fire originated.

Irony aside, Lang told New Times that Bon Temps is finally making its grand return to San Luis Obispo after a long renovation process and a few delays along the way.

So put on your flashiest alligator shoes, drape some beads over your shoulders, and make it down to Bon Temps for a full day of Zydeco music, Blackened Voodoo beer, wine, and complimentary hors d’oeuvres as Lang and the gang celebrate the business’ re-opening—what is being called “Tardi Gras,” a little late for Fat Tuesday, but just in time for the summer revelry.

And, of course, the kitchen will be in full force, so bring an appetite, as well.

Lang and a former business partner opened Bon Temps in San Luis Obispo in 1995, after learning the tricks of the trade from the source in New Orleans. It’s been somewhat of a cult favorite at its current location ever since.

Lang said he is always happy to introduce rookies to more moderate dishes such as the jambalaya or blackened chicken. But as they say, anything worth doing is worth doing right, so we at New Times suggest you shake off those inhibitions and dip into a plate of crawfish, frog legs, or the famed ‘gator—a delectable meat Lang describes as a cross between chicken, pork, and fish.

And of course, if you’re into the spicier side of life, dare to sample some of the Café’s notoriously sizzling dishes such as the Shrimp Creole or the Seafood Gumbo.

“It’s the kind of thing that makes you keep on eating,” Lang said. “’Cause when you stop eating, that’s when it starts to burn.”

Luckily, Phil’s got your back with plenty of domestic and New Orleans craft beers at your disposal, as well, like the Blackened Voodoo or the Abita brews.

The celebration, which will feature eight separate live music acts, kicks off bright and early at 10 a.m. and will boogie on to 9 p.m. on Saturday, July 16. Bon Temps Creole Café is located right off the Highway 101 onramp at 1000 Olive St. in San Luis Obispo. Laisser bon temps rouler!

All are invited to meet local vintners for an afternoon of live music, barbeque and some of the best wine the Central Coast has to offer. The Central Coast Wine Growers Association will hold its third annual Wine Growers Cook-off from noon to 4 p.m. on Sunday, July 24 at Salisbury Vineyards and Winery in Avila Valley, at 6985 Ontario Rd., just off Highway 101. Admission is $15 for adults and $7 for children, and includes each of the Wine Growers’ barbeque offerings. For more info, or for tickets, contact John Burke at 928-4950, or email ccwga@ccwga.org. Tickets are available online at ccwga.org.