Enjoy the traditional foods of the South

Laissez les bon temps rouler! “Let the good times roll!” as they say in New Orleans. And the good times will roll again now that a local favorite, Bon Temps Creole Café, has reopened. It’s been on a seven-month hiatus due to an electrical fire that totaled the dining room; fortunately, the damage was mostly cosmetic. I, one of its many fans, was very happy to see it open again. 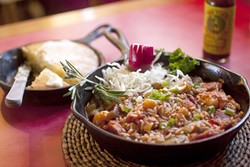 When it comes to the hearty foods that say New Orleans, exactly as Mardi Gras does, I can hardly resist the toothsome classic dishes from this Southern/French hybrid of a city. At Bon Temps, I love the Creole gumbo, seafood jambalaya, fried green tomatoes, and that irresistible sweet cornbread baked in little cast iron pans owner and chef Phil Lang is known for serving. And I’ve never found another Central Coast restaurant that offers such a wide array of these classic NOLA (New Orleans, LA.) dishes such as you’ll find daily at Bon Temps in San Luis Obispo.

On July 13, Lang quietly reopened the restaurant to allow his staff some time to become reacquainted with the popular eatery. The employees had been out of work for seven long months, and, admirably, Lang paid them their wages for four of those months. The usual red tape with insurance inspections and finding a general contractor to rebuild the dining room caused the lengthy closure.

“I finally had to find someone to repair the damage myself,” Lang explained, “and I contracted Pacific Builders owned by Dave Bolduan; he was great.”

Out of 13 employees working at the eatery before the fire, 10 returned once the restaurant was ready to reopen.

Joie de vivre—another French phrase, meaning “joy of living”—describes the easygoing Lang, a chef who kept his head above water despite the hardships he went through to reopen his Creole café. Lang shared some of his most interesting moments with three insurance adjusters, which he found humorous in hindsight. The first inspector to come investigate Bon Temps was from the SLO Fire Department. “How’s business been?” he queried Lang, who happily admitted it had been pretty good thanks to a good review that had been published recently (in another newspaper). Nevertheless, the fire department investigator returned three times the same day to inspect the source of the fire and to ensure it wasn’t set by an unhappy business owner. Finally, Lang asked him: “Would you like to see the video recording of the fire?” Shocked by this unexpected offer, he said he did, indeed, want to watch it.

Lang explained: “I had several video cameras in the restaurant that I could monitor from home; they recorded anything happening in the restaurant. One of those cameras was directed on the cash register counter where the electrical fire started at 10 p.m. after the staff had closed for the evening. At first it smoldered, then little whiffs of smoke began drifting past the camera lens, and that lasted nearly six hours. At 3:30 a.m. the first little fire balls started, which grew and spread around the
dining room.”

Once the fire reached a high level, the camera melted, but the incident was recorded on his computer. Fortunately, the damage was mostly caused by smoke, but that didn’t mitigate the hassles of dealing with insurance companies to pay the repair bills.

The second visit was from the tenant’s insurance company, and finally, the landlord’s insurance inspector.

“They were all shocked to learn I had a video of the fire so they could see exactly how the fire started,” Lang recalled. “The landlord’s insurance inspector looked just like Columbo [remember that TV show about a bumbling-looking but brilliant detective starring Peter Falk that appeared on NBC from 1971 to 1978?]. His appearance was deceiving, but that adjuster was every bit as sharp as Columbo. He watched the video of the fire and told me that in all of his 45 years of investigating claims, he had never seen a video that showed an accidental fire starting.”

Lang highly praised Pacific Builders for their expertise and willingness to work with him to repair Bon Temps. Fortunately, they only had to repair drywall, countertops, furniture, and décor; the heavy kitchen equipment didn’t require replacement.

Lange admitted he had originally vowed he would reopen by this year’s Mardi Gras, but he couldn’t make it by that date. When he did reopen months later, the creative chef held a “Tardy Gras” party instead, with local bands entertaining the crowd. Bon Temps has always been known for its special weeknight dinner events with great bands, which Lang has restarted. On Wednesday nights, he features fish and chips night with live blues by Billy Foppiano, who alternates weekly with singer Valerie Johnson; and on Thursday nights it’s fried chicken with music by the Red Skunk Jipzee Swing Band, among other musicians.

Lang told me he was cooking everything just as he had when it originally opened in 1995.

“We had a lot of people call while we were closed, an average of 12 people daily who left their phone numbers and e-mails to get notification of the date we would reopen,” he finished.

Lang is a California Culinary Academy graduate (we’re alumni, I graduated in the class of 1988), and his class was the first to study at the new venue on Polk Street, which he graduated from in 1986. During a recent visit to check out the remodeled Bon Temps, I was quite satisfied to find the food as delicious as it had always been, from the generous seafood jambalaya to the tender-crumbed cornbread that always satisfies my sweet tooth. Pairing my food with an excellent glass of Hess Collection 2009 Chardonnay, at a reasonable $7 a glass, I was quite happy to welcome back a longtime friend.