Let the sunshine in!

A revival of Hair comes to the PAC

Is it just me, or do you love a good “stick it to the man” story? About 45 years ago, a little off-Broadway musical called Hair managed to seriously ruffle some feathers. Maybe it was the show’s drug use, nude scene, overt sexuality, or mistreatment of the American flag—I don’t know—but you have to admit, the show sure has legs! I mean, 45 years and we’re seeing a revival of the Tony Award-winner at the Pac on Thursday, Jan. 10 (7:30 p.m.; call 756-4849 for tick info). 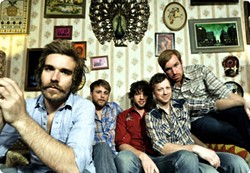 The film follows a “tribe” of freewheeling, love-preaching hippies trying to navigate the changing political and social landscapes of ’60s America. They naturally bump up against the status quo.

According to Cal Poly Arts, “This critically-acclaimed revival became a theatrical tour de force in its limited engagement in Central Park, later moving to Broadway where it won the 2009 Tony Award for Best Musical Revival as well as the Drama Desk, Drama League, and Outer Critics Circle award for Outstanding Revival of a Musical. Directed by Diane Paulus, who also directed the Tony Award-winning revival of The Gershwins’ Porgy and Bess, and choreographed by Karole Armitage, Hair features a book and lyrics by Gerome Ragni and James Rado with music by Galt MacDermot.”

I’m sort of amazed that 45 years after its advent, we’re still dealing with many of the same problems depicted in the musical production. We’re still trying to let the sun shine in. Maybe that’s why the Bloomberg News enthused, “Hair feels utterly of the moment in its power to move us. There’s nothing like it.” And Variety exclaimed, “If this explosive production doesn’t stir something in you, it may be time to check your pulse.” Meanwhile, The Washington Post calls this production of Hair, “Irresistible … the best version yet!”

The Aaron White Band plays the SLO Down Pub on Thursday, Jan. 3 (6:30 p.m.; all ages; free). The Ohio native, now residing in L.A., is touring in support of The Delicious Death of an Ohio Honey Hunter, a collection of 12 originals inspired by The Band, Sam Cooke, Tom Waits, Grateful Dead, John Prine, and Willie Nelson.

The KW Combo will bring its soulful, funky-fun R&B to the Haven Wine Bistro on Saturday, Jan. 5, from 8 to 10 p.m. Featuring Rick Pittman (drums), Wil Anderson (bass), Ken Burton (keys), and Kate Wells (vocals/flute), this eclectic combo will have you up and dancing to covers by everyone from Joss Stone to Stevie Wonder.

On Monday, Jan. 7, La Perla del Mar in Shell Beach will present Steve Seskin, Don Henry, and Craig Carothers in a 7 p.m. show ($15 at the door; all ages). These three performers are all Nashville songwriters who’ll be sharing the stage and playing songs just like they’ve done at the legendary Bluebird Cafe. Seskin wrote “Grown Men Don’t Cry” for Tim McGraw, “Life’s a Dance” for John Michael Montgomery, and “I Think About You” for Collin Raye. Carothers wrote “Little Hercules” for Trisha Yearwood, among others. Henry is the Grammy-winning writer of “Where’ve You Been” for Kathy Mattea. Presale tickets are available at Boo Boo Records or online at brownpapertickets.com.

Even tireless SLO Brew deserves a break once in awhile, which is why it only has one show scheduled this week: Red Wanting Blue on Wednesday, Jan. 9 (7:30 p.m.; all ages; $10), with History of Painters opening. Red Wanting Blue is an Ohio-based band fronted by singer-songwriter Scott Terry, and while the band is well known for its relentless touring through the Midwest, we’re just getting to know them here on the Left Coast. They’ve appeared on the David Letterman Show, and their latest studio album, From the Vanishing Point, debuted in the top 10 of Billboard’s Heatseekers chart. You’ll dig Terry’s earthy baritone and hooky, road-tested songs. History of Painters is an earnest, melodic alt-folk duo from SLO that’s inspired by the likes of Sigur Ros, Coldplay, and Simon and Garfunkel. I caught them last summer at Live Oak and was thoroughly impressed.

Linnaea’s Café will be host to a couple of singer-songwriters on Wednesday, Jan. 9, when composer and multi-instrumentalist Alex Rather-Taylor and Miles Wick head into SLO Town for an 8 p.m. show. Rather-Taylor hails from the Bay Area, and his music spans numerous styles and influences such as Frank Zappa to Elliott Smith to the Andean folk music of Peru. He’s also part of the San Francisco indie-rock act We Are the Men, and his next solo record is called Career in Magic—“a highly produced, self-made recording that features [me] on everything from vocals to synths and keys,” he said. Wick is a Brooklyn-based musician originally from Sonoma. His most recent recording is Open Heart, a homemade demo.

The Blank Tapes return to SLO Town to play Frog and Peach on Wednesday, Jan. 9. The psychedelic garage rock act feels like a forgotten late ’60s/early-’70s act and has been compared to such contemporary acts as Belle and Sebastian, Pavement, and the Black Keys. Featuring Pearl Charles and Matt Adams, this indie act is infused with all the raw energy and boundless enthusiasm of a kid with his first guitar. Good stuff!