Upon entering Lighty’s Independent Volkswagen Repair, visitors will notice the spaciousness of the garage, as well as its cleanliness. As owner Scott Lighty is quick to state, the garage is also thoroughly organized, from multiple toolboxes to the spare parts from Porsches, Jeeps, and El Caminos Lighty’s uses to repair cars to the black stereo in the back corner playing classic rock hits from 104.5 FM. 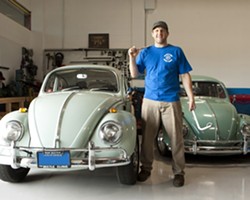 Speaking of classic rock, a surprising quirk of the location is the black and white framed poster depicting legendary hard rock guitarist Frank Zappa sitting on what is unmistakably a toilet. Despite not being a fan of Zappa’s music, Lighty included the picture in his business because he believes Zappa’s notoriously idiosyncratic facial hair bears a strong resemblance to that of his father, Tom Lighty, owner of the Beetle Clinic in San Mateo. A photo of Tom Lighty, who inspired Scott to his new career, can be found on another wall.

Both Lightys’ businesses specialize in Volkswagens and other German automobiles, such as Audis and, to a lesser extent, BMWs. Lighty prefers to work with newer models of Volkswagen, his personal favorite being the Volkswagen Tiguan, which wasn’t introduced until 2007. He is willing, however, to do a variety of jobs, from minor repairs to transmissions, and any Volkswagen is welcome at Lighty’s.

“I’m an automobile repair expert you can trust,” he said, explaining his customer service. “I use quality equipment. Not a whole lot of people know about cars, but I want to make sure that all of my customers understand how Volkswagens work.”

Prior to opening his Volkswagen repair shop, Lighty—a native of San Carlos in San Mateo County, who moved to the Central Coast in 1999—had a successful super heavyweight kickboxing career at the Pit where he trained alongside Chuck “The Iceman” Liddell. Over time, Lighty lost interest in fighting and decided to pursue another of his lifelong passions: auto repair. And prior to his years of kickboxing, Lighty was highly active in the Boy Scouts of America during his high school years, where he rose to the highest rank of Eagle Scout. Lighty’s years with the Boy Scouts gave him further hands-on experience, which he was able to apply to his new entrepreneurial effort in order to build his credibility.

Lighty’s officially opened its garage door to Volkswagens on May 31, though he purchased the property in February. The business is at 887 Ricardo St., suite B, in an industrial complex off of Capitolio Way near Higher Groundz and the Crossroads Plaza on Broad Street in San Luis Obispo. The website is currently under construction, but can be found at lightysindvw.com. Lighty’s can also be reached at 546-8490.

There will be a fundraiser for the Elm Street Off-Leash Dog Park on Aug. 18 at 10 a.m. to 2 p.m., featuring dog demonstrations, a barbecue, a parade, pet-related vendors, dog certifications, a gift raffle, contests for the cutest dog and owner-dog look-alikes, activities for children, and more. Elm Street Park is at 380 Elm St. in Arroyo Grande. E-mail info@fivecitiesdogpark.org or call 550-5334 for more information. …

The Cal Poly Theatre and Dance Department invites artists to submit one original work of visual art inspired by the play God’s Ear by Jenny Schwartz. Each piece must be delivered to Spanos Theatre at Cal Poly by Nov. 5 between 1 to 5 p.m. The script for God’s Ear can be bought at the El Corral Bookstore on Cal Poly’s campus or online from its publisher at samuelfrench.com.