San Diego Comic-Con is an annual multi-genre entertainment convention. More information can be found at comic-con.org

Every November for the past three years, at a time when any other high school student would be valuing their weekend sleeping time, I wake up as determined and energetic as a non-morning person can be. I watch a movie, and wait four hours to maybe, possibly get tickets to San Diego Comic-Con.

Comic-Con as a whole is an amazing experience. It provides people with in-depth discussions on their favorite movies, TV shows, podcasts, and of course comic books. It also allows attendees to interact with their favorite creators, actors, directors, and writers. There are first looks at upcoming films, TV shows, and other things, and even some exclusive content. Many people attend in costume to celebrate their fandom, and many groups sleep in line on the grass in front of the convention center in order to get into their favorite events the next day. 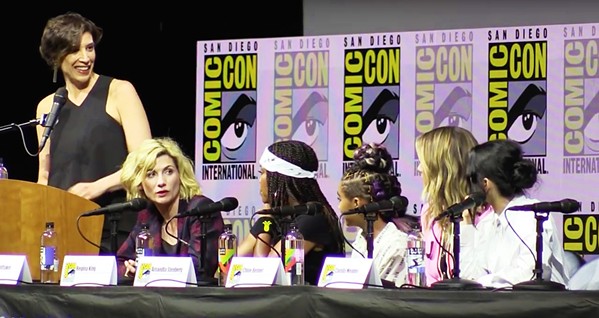 As I arrive in San Diego on July 19, I can see that Comic-Con stretches for miles around the convention center, and especially on Saturday and Sunday, there are many events going on around the city for Comic-Con attendees, including concerts, interactive exhibits, and other fan-feeding fun. But as the events extend away from the convention center, so do the crowds. In past years this has caused complete chaos, with traffic and trying to navigate it. This year, with new security systems and the closure of two major roadways, a lot of that chaos is avoided. However, along with the new security comes a lot of discomfort, and awkwardness.

But the main source of the strange feeling this year stems from disrespectful fans, especially when they're asking questions at the panel discussions and shouting at the panelists. At multiple events this year, people tell actors from Marvel movies that they are bad actors or stupid. This makes panelists too uncomfortable to properly answer questions and also promotes discomfort among respectful fans.

A good example of respect and maturity in fandom, and the most wonderful panel I experienced this year at San Diego Comic-Con, was the Doctor Who panel. The show has gone through multiple changes this year, including writers, directors, cast, and even the special effects team. But the most important of these is the new doctor. Anyone who knows Doctor Who may recognize the many faces of the doctor, all the same character, who changes bodies to avoid death. But for the first time in more than 50 years, the doctor—a beloved character, a symbol of hope and peace, and a figure that so many people look up to around the world—is a woman.

Jodie Whittaker (Broadchurch, Black Mirror) will play the doctor in the upcoming 11th season. At both the Doctor Who panel and the Women Who Kick Ass panel, Whittaker speaks about the process of being cast as the doctor and the struggle she faced as she realized that she is playing a character that has historically been a man.

"There was no part of me as an actor that would ever think I would be auditioning for the doctor. Because the doctor is played by a guy," she says during the panel.

Whittaker also speaks about the pride she felt when she thought about how, as a child, she couldn't relate to all the stars on TV because they were all men, and how her new role may change that for other girls.

The Doctor Who panel is extremely moving, and brings many attendees to tears as we witness Whittaker being welcomed to the Doctor Who family by the countless female fans who have waited patiently for something like this to happen. The panel embodies exactly what a fandom should be, what Comic-Con should be, and how fans should act toward each other and toward the creators of what they love. Δ