We are such a Leo. At least, that’s according to Shell Beach astrologer Diana DeGarmo, who prepared New Times’ natal chart based on the date, time, and geographical coordinates of the newspaper’s first printing—its birth, if you will. What are New Times’ strengths, we asked, and what are our weaknesses? With whom are we most compatible, and who do we find disagreeable? And most of all, what does the future hold for this beacon of light, this shining star, this lion among fish? 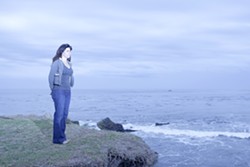 “Jupiter and Taurus are going to be squaring your sun,” DeGarmo said, scrutinizing New Times’ chart. “There is a perceived optimism coming. Careful that New Times doesn’t get too big for its britches.”

Our sun sign—that’s the one that appears in most astrology columns, like that of our beloved Rob Brezsny—is in Leo. But that’s just a fraction of the paper’s astrological makeup.

“The sun, moon, and rising are all the three key components in a person’s horoscope,” DeGarmo explained. At the moment of the paper’s inception at 5 a.m. on Aug. 6, 1986, the moon and sun were in Leo, the lion, while the rising sign was in Cancer, the crab.

It may seem odd to assess the horoscope of an entity like a news source as if it were a single human being, but the practice, known as mundane astrology, has been applied to countries and businesses, DeGarmo informed me. So why not a newspaper?

For our New Times reading, DeGarmo decided to start off with the rising sign, or ascendant.

“The rising sign is really important because it’s the mask we wear in public. It’s our persona, as Jung would say,” she explained. “It’s connected to Mercury, which happens to be all about communication. Cancer is all about security and the home.”

She concluded: “New Times is all about San Luis Obispo.”

“The sun is the ego,” she said. And with the sun in gregarious, majestic Leo, “there is a need for New Times to be liked. It’s interesting, because it’s not always liked. But Leos always want to be adored; they really don’t like to be put down. They like to be applauded for,” she said.

Leo is theatrical, with elements of the performer, the child, and the clown, she said, adding, “I’m thinking of the Shredder.”

As Leo happens to be in the first house—the house of self—there’s an inherent selfishness to New Times, too, DeGarmo said.

“It says, ‘Look at me; don’t ignore me. If I accidentally ruffle feathers, get over it,’” she explained.

She quickly added: “And I’m totally reading the chart.”

Now, about those warnings. With Pluto at five degrees in Capricorn, the coming year could be a bumpy one, the astrologer warned. And Saturn’s entry into the fourth house, she said, indicates that the paper is still being affected by the recession.

“You’ve got about two years or so of just working hard,” she estimated.

Mid-heaven is in Aries, she said, giving the paper a need to be independent.

“If New Times got bought by a big company,” the Shell Beach resident suggested by way of example, “it would be very, very hard. New Times is very fiery.”

So what does this all amount to?

“There are a lot of secrets that are being kept around those topics, that New Times knows about, but they can’t let the secret out,” she elaborated.

Scandals in the community sometimes go unpublicized, either because the evidence can’t be substantiated or because the entities involved are too powerful. The paper must find a way to deal with this uncomfortable knowledge, said the astrologer: “We would usually send someone like New Times to therapy.”

At the moment of New Times’ printing, the planet Venus was in the sign of Virgo.

“Venus is values, which is interesting because Virgo is not particularly liberal,” she said. “It’s basically devoted to the third house of communication.”

Fitting, for a newspaper. But there’s more. When it comes to money, advertising, and marketing, DeGarmo said, “there’s a cheapness” to New Times.

Well, we are cheap. Free, actually. But it’s not always a bad sort of cheap.

“There’s a business person behind New Times that knows how to run a business,” she went on. “I do see that there is somebody responsible. Venus in Virgo is a trait shared by the New York Times, proving we may be just a York away.
Or are we?

The New York Times was born in Manhattan on Sept. 18, 1851, with the sun in Virgo. To DeGarmo, this speaks to an intense need for accuracy.

“I can just imagine them writing things out over and over again with a pen, and taking care to be painstaking,” she said.

But other than that initial similarity, the astrologer discovered, New Times and the New York Times have practically nothing in common. We began mapping other newspapers’ natal charts in search of a love match.

Germany’s newsweekly Der Spiegel, born in Hamburg, Jan. 4, 1947, was an attractive candidate indeed as the biggest weekly in Europe.

With its sun in Capricorn, Spiegel has the qualities of “the great father, the prime minister, the elder, the strategist,” she said. “On the challenging side, it is so Hitler. It is so the tyrant, the schemer, the power-tripper, the controller. So I feel like there was a lot of control around that paper.”

With a moon in Taurus, Der Spiegel has a very conservative energy.

Another Virgo, British newsweekly The Economist, was next. Ruler of the nervous system, Virgo can often foster a perfectionist, self-punishing insecurity, DeGarmo said. Accuracy with numbers is important to The Economist, as is modesty. And indeed, the paper’s stories aren’t bylined, perhaps to remove the individual ego from the writing. A possible moon in Sagittarius, ruler of foreign lands, education, and philosophy, gives The Economist a need to be globally published—which it is.

However, The Economist’s seriousness, though often punctuated by dry wit, wasn’t jiving with New Times’ playfulness and impulsivity.

Then we met the Los Angeles Times. A Sagittarius ruled by Jupiter, the L.A. Times was bright, bubbly, and optimistic.

Jupiter “is like Santa Claus: eat well, be jolly, have a good time,” DeGarmo explained. “But in this chart I do see a ton of Taurus. So there’s also this energy, interestingly enough, of stubbornness. Taurus rules materialism, too, so there are lots of advertisements
for diamond rings and jewelry.”

Delving deeper, Venus and Mercury in Scorpio could indicate corruption surrounding the beginning of the L.A. Times, probably having to do with money. DeGarmo suggested that the newspaper could have been started with capital from a shady source.

Out of all the newspapers whose horoscopes we considered, the L.A. Times best matched New Times’ energy, enthusiasm, and brightness.

Once we got that sorted, we decided to look a bit further into
the coming decade.

“Seven to eight years from now, I just see something life-changing that looks very positive for New Times,” she predicted. “Maybe a
new owner. Maybe even some massive notoriety. A huge unexpected event that is going to change New Times completely.”

DeGarmo concluded with these words of advice: “Very important for New Times, in order to fulfill its destiny, is to be bold, to be maybe a little impulsive, and maybe even, dare I say, a little reckless.”

Why argue with the stars?