Oh, to be young, in love, and independently wealthy. You know the story: Boy meets girl. Boy is terribly rude so girl punches him in the face. Boy and girl conspire to get fake engaged to live up to the restrictive morals of Georgian-era England. Hmmm, oh right, that’s not exactly how your typical romance story goes, but A Convenient Engagement: The Countess Scandal Series by San Luis Obispo author Kimberly Bell isn’t your mom’s dog-eared romance book (trust us: this book has scenes that are definitely not mom-approved). New Times sat down with Bell to get the deets on her recently released first book of a three part series. 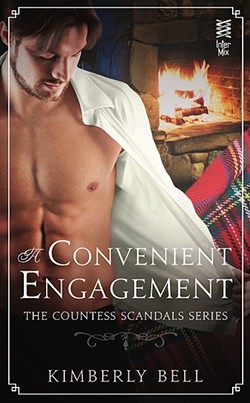 New Times: What inspired you to write A Convenient Engagement?

Kimberly Bell: I used to read a ton of historical romance novels; I still do. When I was 8 years old, I had read through all of the school library and most of the county library. My mom was trying to keep up with books for me, so by the time I was 11 she broke down and said “Just skip the sex parts,” and started handing me romance novels that the ladies at her office would collect, and I didn’t skip the sex parts at all.

KB: I was a decent writer; I think everyone thought I was going to be a writer, but I felt like I needed to get a real job and make money. So I did that for a while and realized that real jobs are bullshit. I had a pretty decent career for about seven years. I was the Internet sales and marketing coordinator for Takkens. I got laid off and I didn’t want to go back into something like that. I decided I would take the money I had in savings and give writing a book a shot.

NT: What’s the gist of A Convenient Engagement?

KB: This girl [Miss Hannah Howard] who grew up sort of isolated in the country in 1727 England, her dad dies and leaves her a ton of money. They didn’t have a great relationship. He was really strict and she didn’t get to have a ton of fun. So she moves to London and is planning on having a more exciting life and getting to be a girl and dance and flirt. And the day she moves in, her neighbor (Gavan Dalreoch, Earl of Rhone) comes over and is a huge jackass, and she hits him and basically gets shunned by society. And then his family tells him it’s time for you to settle down and not ruin this girl’s reputation, so you’re going to marry her. They don’t want to marry each other so they pose a fake engagement to make it through and make everyone happy. 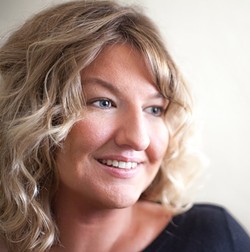 KB: My stories are really character driven, so pretty much in schizophrenic fashion my characters start talking to me, and I come up with a page. I write chronologically, which is nice because my editing process is easy, but it’s hard because if I get stuck the whole thing comes to a stall.

NT: There is a shirtless, very ripped man on the cover of the book. How explicit is this story?

KB: They have marketed me as the highest heat level. They get pretty physical pretty early and continue to throughout the book. My mom was all: “The books are really good, you just need to take the sex out.” And she put that on my Amazon reviews. My first not five-star review was from my mom. It was four stars and she said very nice things, but also that the sex should have been taken out of it. And I love that about her. She’s perpetually honest.

NT: So since you are a romance writer I have to ask, what’s your current romantic situation?

KB: I’m single and currently on Tinder. Mostly I’m using Tinder for entertainment right now. I’m 31 and everyone my age I’ve pretty much already dated or discounted in San Luis Obispo. On Tinder, unless you’re going to drop down to the Cal Poly-aged guys in their early 20s, which I have done, but it’s more of a novelty factor. I have really high expectations for relationships, so if it’s not going to be the thing then I would rather have casual relationships than compromise on what I want for a relationship.

NT: What are some of your favorite books and authors?

KB: For romance novels, anything by Amanda Quick, pretty much anything written by Eloisa James. I read a lot of epic fantasy also. I loved the Malazan Book of the Fallen series by Steven Erikson.

Ryah Cooley is blushing while she turns the page at rcooley@newtimesslo.com.