Who said it? A weekend of comedy and roller derby results in a pop quiz to see who was paying attention 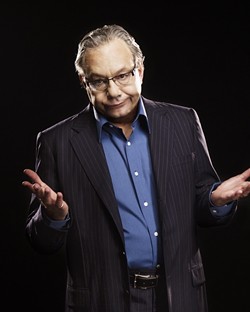 Instead of attending just one event this weekend like that underachiever and snark-about-town Glen Starkey, I attended two: Lewis Black’s comedy show at the PAC on Thursday, Sept. 12 and back to back bouts hosted by Central Coast Roller Derby on Saturday, Sept. 14. I figured if I have to do homework over the weekend, you mofos should too. Here’s your pop quiz. In what context did the following things appear? Hint: All the answers are either a.) at comedian Lewis Black’s recent performance at the PAC or b. at the Central Coast Roller Derby’s recent game in Paso Robles.

2. “It’s always exciting to be here. And by here I mean on my way to San Francisco.” 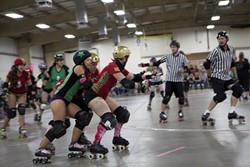 10. “There is no point where by paying taxes you lose your freedom.”

11. “How much of a fucking gluten problem is there in your town?”

14. “If there was a male league, I would be TestiKiller.”

1. CCRD. Specifically, these were New Times staff writer Rhys Heyden’s contributions to the game we play in which we try to come up with the best derby names.

6. CCRD. In the women’s restroom, to be exact, to separate skaters from average Janes with full bladders. Although, according to Heyden, “I think real roller derby people just pee right in the ring.”

7. CCRD. The names of the two North County-based teams that went head to head Saturday night. The score was 197 (Paso) to 121 (A-Town). Yes, Lewis Black bagged on SLO a little bit, but he left the rest of the county alone.

8. Lewis Black. According to Bowman, the pair couldn’t stay there because Black is afraid of it. Black insists they couldn’t stay at the inn because Bowman is psychotic, and you can’t bring a crazy person to the Madonna Inn.

9. CCRD. The High Country Mountain Derby Girls’ go-to jammer had some freaking moves! (Obviously, since the score at the end of their bout against SK805 was 229-113.) I think I have a new hero, and she kicks ass. On rollerskates. My second favorite actual derby name of the night was Roll v. Wade.

10. Lewis Black. Puttin’ the hurt on the tea-baggers.

11. Lewis Black, in reference to the Big Sky menu. For those of you who were wondering, Black ordered lobster macaroni and cheese, the fish of the day plate, and a romaine salad.

12. CCRD. That’s just what happens when you’re sitting in the front row on a turn. The quote was from former New Times News Editor Colin Rigley, who excels at stating the obvious.

14. CCRD. Rigley lamenting the fact that he doesn’t get to choose his own roller derby name. I think the rest of us are relieved there’s no such league, especially after the name “Gunalingus” came up.

15. Lewis Black. I have no context for this, but it’s super catchy.