A work in progress.

That's how a panel of local health service providers on Feb. 25 all described their efforts to better serve the LGBTQ-plus community in San Luis Obispo County.

"Every day, it's progress on that journey," said Mark Lisa, CEO of Tenet Health Central Coast, which operates Sierra Vista and Twin Cities hospitals. "We're not perfect. We're working to change generation after generation of beliefs into something greater so we can all celebrate everybody."

Leaders from nearly a dozen health and social service organizations participated in the Feb. 25 LGBTQ+ Mental Health Virtual Town Hall, an event put on by the SLO County #Out4MentalHealth Task Force and co-hosted by Transitions-Mental Health Association (TMHA) and the Gala Pride and Diversity Center.

The 100-minute Zoom gathering focused on the mental health challenges that LGBTQ-plus community members often disproportionately face, and the gaps in affirming services available to them to help meet those challenges.

Dr. Jay Bettergarcia, a Cal Poly professor in psychology and child development and director of the QCARES research team, presented findings from a recent mental health needs assessment that documented those challenges and gaps in SLO County and Santa Maria.

Through surveys and focus groups carried out in 2018-19, Bettergarcia found that 85 percent of transgender and nonbinary participants had contemplated suicide in their lives, and more than 50 percent of LGBTQ-plus youth seriously considered suicide in the past year. 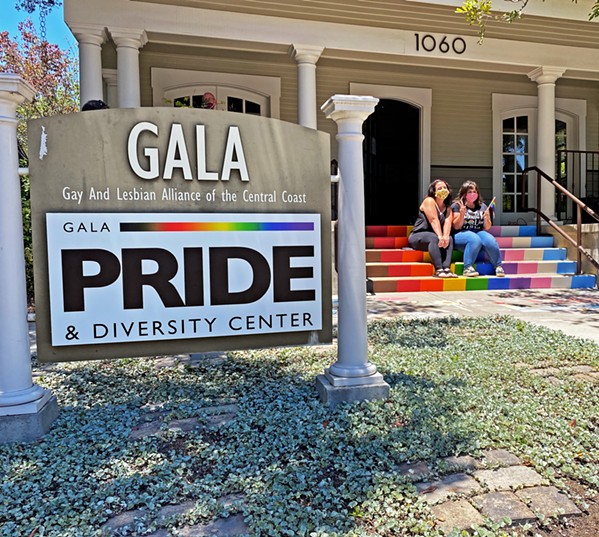 "Across the board, our trans and non-binary folks in our community are significantly more distressed than our queer folks or sexual minority folks," Bettergarcia said. "It's not a factor of having those identities. But it's what those identities mean in the context of our society. In our society, we see that prejudice, stereotyping, and discrimination are huge."

Bettergarcia offered recommendations to local service providers—some of whom attended the town hall meeting—for becoming more inclusive and accessible to LGBTQ-plus identities. The suggestions ranged from taking part in more gender- and sexuality-affirming trainings, to boosting suicide prevention programs, to increasing support for local youth, to creating a database of LGBTQ-affirming services.

"We need more ways for folks to find providers," Bettergarcia said. "We heard a lot about 'my therapist is friendly and a good person, but they don't know what they're doing with my gender identity.' So not only do they need to be friendly and supportive, but we need providers across our county who are knowledgeable, aware of their own biases, and skilled to do this work."

After Bettergarcia's presentation, leaders from nine local service organizations, including RISE SLO, Cuesta College, and the SLO County Behavioral Health Department, took turns talking about what strides their programs have made on LGBTQ-plus inclusivity. Those included removing the binary gender choice on forms, requiring more training for their staff, and expanding services targeted to LGBTQ-plus populations. Across the spectrum, each group expressed a desire to do more—sharing a sentiment that the work is only just beginning.

"We're striving," said Jill Rietjens, a division manager for youth mental health services at the SLO County Behavioral Health Department. "We're really seeing more and more kids coming forward with gender identity, sexual orientation issues that they want to talk about and be open about. I'm watching my staff just wanting to grow and learn and move in this direction."

• Central Coast Community Energy (3CE) is launching a new rebate program for customers who buy a new or used electric vehicle. Customers can receive up to $4,000 off their new electric car under this first-come, first-serve program—with $700,000 in total available funds. "While transportation accounts for an estimated 41 percent of California's greenhouse gas emissions, currently less than 2 percent of vehicles on the Central Coast are electric," according to 3CE. Δ