This destination resort was built to last

I was among the first eager diners crowding Lido at Dolphin Bay Resort when the doors to the new restaurant opened in Shell Beach in 2006, and I have returned too many times to count since then. The first year I enjoyed my birthday there, feasting on a variety of fresh shellfish on an iced platter and washing it down with fine champagne. I’ve attended numerous winemaker dinners, the James Beard Foundation dinner parties, and Central Coast Wine Classic food and wine seminars at Lido, the latter of which provided an outstanding meal by super star chef Emeril Lagasse of New Orleans. Lido has always remained among my top five SLO County restaurants.

Over the past 18 months, Lido’s undergone several changes of the guard in the kitchen, with three different chefs, yet it’s always maintained a high-quality menu. After original chef Evan Treadwell left, two others followed, but they departed simply because it wasn’t the right fit for either of them. The key to success lies in having a chef who wants to make their restaurant a destination for food and wine lovers. He or she must be ardent about the eatery, from the kitchen to the front of the house. I believe that Lido’s two latest executive chefs, Jacob Moss and Maegen Loring, are motivated to keep Lido the special eatery it has always been.

Chef Jacob Moss is enthusiastic and passionate about cooking. His interest began as a kid, when his mom assigned him to prepare the family’s dinner one night a week. Rather than grumble over the chore, he had fun and came to love cooking. Before landing at Lido, he studied culinary arts and worked a variety of jobs to earn his chops. When the window of opportunity opened to join Lido chef Brian Collins in the kitchen, Moss leapt through it.

“Lido is a really good fit for me; I like all of the people here,” Moss explained. “And Rick [Loughead] is one of the few restaurateurs who’s really interested in investing in the restaurant.”

For fall 2012, Moss changed every menu—breakfast, lunch, dinner, and lounge appetizers—noting that he wanted to put his “stamp” on each dish. He also hired sous chef Ian Florence to join the kitchen team: “I like to give everyone the chance to be creative. It helps Maegen and I put out a wider choice of foods.” 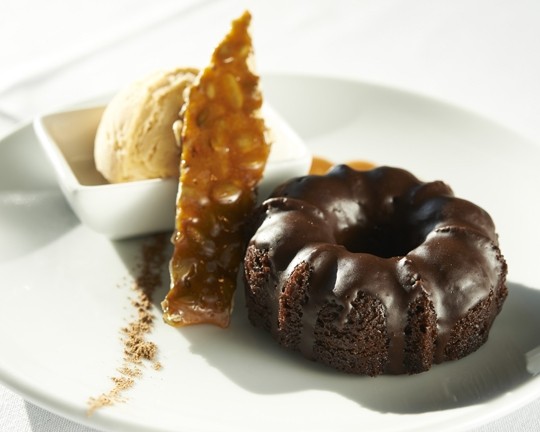 One of the best salads I’ve enjoyed here was the beef carpaccio with wild arugula ($18), served with Dijon aioli, capers, and shaved grana padana cheese, a delicious combination of flavors. Because Moss said he searched for the best steaks with the perfect flavor and marbling, I ordered the steak frites ($34), an 11-oz. New York steak with parmesan truffle fries, and arugula salad. I found the beef very impressive for its tender bite and good flavor, and it was perfectly medium rare as requested.

On another visit, I ordered the chef’s tasting menu ($60 per guest), a five-course meal that’s quite generous if you can afford the indulgence; my husband Dan and I found the albacore sashimi with pineapple gelee very tasty and artfully presented; we loved the grilled swordfish with crusted potatoes, celery root puree, charred heirloom tomatoes, and Meyer lemon beurre blanc; the filet mignon was perfectly cooked and tender, but I found the blue cheese whipped potatoes way too “blue” for my taste. Each of these dishes can be ordered ala carte off the dinner menu.

One of the difficulties Lido has always had was the fact that too many locals thought it too expensive for their budget. I’ve always said you can eat well here at reasonable prices if you don’t order lobster or filet mignon. In reality, Lido’s menu always could serve locals well no matter what their budget. It’s easy to drop in and enjoy a wonderful one- or two-course meal while staying within your means, and valet parking is complimentary. Surely you can spare a few dollars to tip the valet. But the best value, if money is tight, is lunch, where portions seemed huge to me. We enjoyed the Teixeira Ranch grass-fed beef hamburger which has crisp bacon, grilled onions, white cheddar, and 1,000-island dressing, and fries ($14); and the prawn tacos with jicama slaw, and guacamole ($15).

Upon learning that chef Maegen Loring was closing her super-popular Neon Carrot in SLO to become Lido’s pastry chef, I was as surprised as most of her fans. But it all made sense when she admitted she was giving up being a restaurateur, a job that stifles your creativity and makes you the numbers person. Loring wanted to get back into the kitchen where she could once again be the creative chef she naturally is, and be able go home to her family at night. That’s what she was offered at Lido, and she gladly accepted.

One bite of her chocolate stout cake, an intense dark chocolate, and I was smitten ($9). The mini-Bundt cake topped with chocolate glaze is served with pumpkin ice cream and crisp pumpkin seed brittle. We also enjoyed her homey apple crisp served warm and topped with thyme ice cream ($9), like Grandma’s served fresh from the oven. You’ll always find great seasonal desserts from this talented pastry chef. Loring also handles their catered affairs, in-house and locally. During the SLO Vintners fall harvest event, she made a mushroom bisque that was rich yet elegant, perfect for pairing with those South County Pinot Noirs. I had seconds so I could try the various Pinots with it.

Moss concluded with a promise: “I love the kitchen team and the entire staff. I’d do anything for this team. We all share a common goal of pleasing our guests. We’re on track to do great things on the Central Coast.